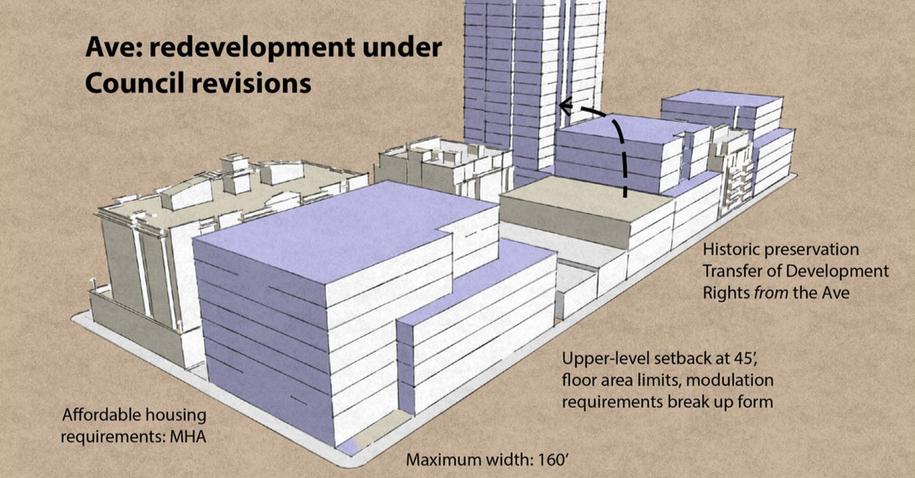 Seattle councilmembers will meet this morning to take up discussion and make possible votes on amendments to the University District rezone and urban design legislation, setting up a process that could send a final bill to the full City Council in the next week or so for approval. Last month, we covered many of possible amendments that might be proposed, which numbered more than a dozen at the time. These touched on issues like whether the City Council should stick with the Mayor’s proposed zoning to increase building heights on The Ave by two floors or only one, commercial affordability, historic preservation, and need for small retail space. Members of the Planning, Land Use, and Zoning (PLUZ) Committee also heard public support for giving more incentives to develop family-sized units.

Before jumping into the full menu of proposed amendments, let’s go over what is in the proposed University District rezone and urban design ordinance today:

Most of the amendments covered in this article have been discussed before, but many of them have been further refined and there are a few new amendments being proposed as well.

Amendments Related To The Ave

As mentioned before, the PLUZ Committee had two divergent policy choices for The Ave: go with the proposed zoning allowances for development or amend the proposal by chopping off one floor in building height. The choice to do one or the other was important because it meant considering knock-on effects to other policies already calibrated to the original zoning proposal. For instance, if the PLUZ Committee chose to pursue SM-U 75 instead of SM-U 85 zoning, it meant that keeping a full scale transfer of development rights (TDR) program for the area wouldn’t be particularly useful. So one option was to tighten up the scope of the program in the SM-U 75 zone to only allow for property owners there to sell TDRs to higher density zoning areas in the University District. The Committee, however, is now faced with an even bigger policy question on The Ave: rezone or no rezone.

By and large, the zoning changes discussed at the last PLUZ Committee meeting are still on the table, but there may be a delay in one rezone. A new amendment, not previously discussed, would delay rezoning a one-block segment of University Way NE between NE Ravenna Blvd and NE 56th St. Zoning for the properties is LR3 but is proposed to go to NC2P-55 (M1) in the Mayor’s zoning proposal. The delayed zoning change could be picked up through the other MHA zoning changes that are being proposed city-wide (PASSED).

The other proposed rezones include dozens of properties just west of the University Heights Community Center and two properties on NE Ravenna Blvd. The properties between NE 50th St, the mid-block east of Brooklyn Ave NE, NE 52nd St, and the alley west of 11th Ave NE are proposed to be rezoned to NC3-75 (M1) and MR (M1) (PASSED):

A basket of other amendments touching on commercial floorplates, transportation, TDR, and open space are also in the mix: 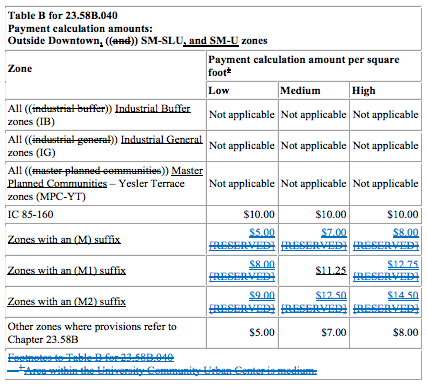 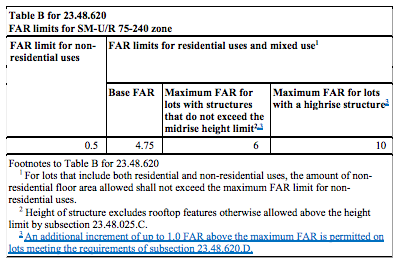 The sum of this amendment would be to maximize incentives for family-sized units on SM-U zoned sites while encouraging developers to focus their efforts on standard FAR bonuses built into the code (e.g., open space, green streets, historic preservation, and childcare). (PASSED)

Separately, the PLUZ Committee will consider amendments related to MHA that would require an annual–as opposed to once every two years–report on the performance of the MHA program and include a new requirement that the report specify a list of projects that have been granted a modification for either of the in-lieu payment or on-site performance affordable housing requirements. The amendment package will also include more than a dozen non-substantive technical amendments to correct minor errors and omissions (PASSED).

The PLUZ Committee will hold a meeting today (February 7th) at 9.30am in the Council Chambers. Those who wish to provide public testimony should arrive early to sign up. E-mail is also an option if you wish to contact Councilmember Rob Johnson, the PLUZ Committee Chair, before the meeting. It is possible that a final ordinance could pass out of committee with some or most of the above amendments, in addition to others that might be proposed at the meeting.

UPDATE 2/8/17: With amendments adopted to the bill, a substitute bill will be introduced. The full City Council is expect to vote further amendments and a final bill on Februrary 21st. Some amendments considered at the PLUZ Committee may be proposed again before the full Council.