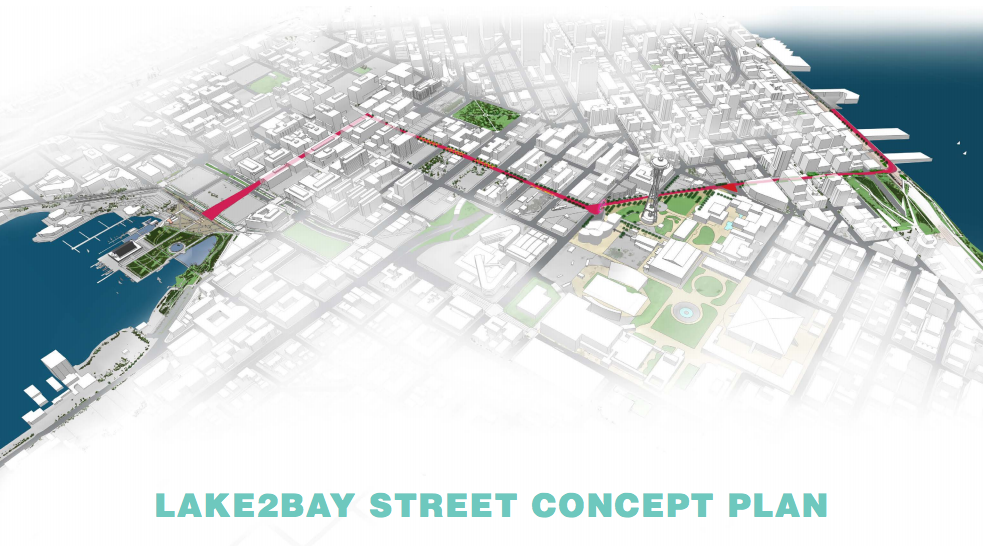 A rule governing the public realm improvement plan for the Lake2Bay corridor has finally been adopted. The 1.6-mile Lake2Bay corridor stretches from Seattle’s waterfront to Lake Union. Five distinct segments make up the overall corridor, which include:

The plan involved a multi-year planning process of community engagement with the Belltown, Uptown, and South Lake Union neighborhoods that Lake2Bay corridor passes through. The Seattle Parks Foundation and corporate sponsors, such as Amazon, Vulcan, and the Bill & Melinda Gates Foundation, also helped facilitate development of the plan. In terms of implementation of the plan, the Seattle Department of Transportation and Seattle Department of Construction and Inspections are responsible for ensuring that the rule is incrementally applied to new development adjoining segments and through improvements made by City agencies along the corridor.

The Lake2Bay concept plan outlines a variety of different public realm treatments that will be implemented based upon the kind of spaces developed along the corridor. Treatments include tree plantings, lighting, public art, and pavers. The plan also specifies wayfinding locations, stormwater infrastructure, and candidate locations for water re-use systems. Notable in the plan is sea foam green, which has been identified as the preferred wayfinding color and recurring feature that is emphasized throughout the plan.

Terry Ave N forms an important segment of the Lake2Bay corridor and stretches four blocks from Lake Union Park to Thomas Street. A north-south street, it acts as a primary visual axis from the water to Downtown. New development has sprung up along the street in recent years, which has helped deliver many Green Street improvements like wide sidewalks, plazas, planter strips, and green stormwater infrastructure. Terry Ave N also accommodates the northbound stretch of the South Lake Union Streetcar. Future development will help deliver the last pieces of the pedestrian-oriented streetscape and the overall Lake2Bay segment.

On Thomas Street, the Lake2Bay street design concept plan will govern the more detailed aspects to the street. An existing rule already identifies this segment of the Lake2Bay corridor as a Green Street and sets out parameters for how the street should function. The Lake2Bay plan suggests that the street “should be more than just a ‘green” pedestrian connection–for its true potential to be realized, it must be enriched by as much ground level retail and restaurant activity as possible, and the ‘grain’ and material character of the support should encourage pedestrian use of this street as an outdoor living room.” One way to do this, the plan mentions, is by creating incentives for small scale retail–in the 1,000- to 2,000-square foot range–at street level.

As indicated in the section plan, the street will be heavily focused on dedicating space to pedestrians. Somewhere between 35 and 43 feet will be set aside for sidewalks and planting areas out of a 66-foot right-of-way. On-street parking and loading zones will occasionally be located on one side of the street. For vehicular traffic, the street will remain bi-directional and include sharrows for people biking. The detailed plan indicates that Thomas Street will have Tivoli-style lighting strung across it, sidewalk café space, functional stormwater facilities in planter strips, special pavers, and low curbs. A small segment of Thomas Street between 5th Ave N and Taylor Ave N will have standalone bike lanes in each direction.

Major rechannelizations will be made to Broad Street between 5th Ave N and Third Avenue. The street will go from four general travel lanes to two between 4th Ave N and Denny Way and include dedicated turn pockets. The segment between 4th Ave N and 5th Ave N will become one-way with one to two travel lanes, a turn lane, and taxi parking near the Space Needle. The remainder of the street space will be converted to bike lanes in each direction and added sidewalk and planter strip space. At the intersection leading to the Space Needle, the plan calls for a pedestrian-oriented plaza crossing and all-way walk pedestrian scramble. The same type of treatment is planned for installation at the Broad Street/Thomas Street/5th Ave N intersection.

The street configuration on Broad Street will change substantially between Third Avenue and the waterfront. The redesigned street will meander in a wavy fashion and generally consist of one travel lane in each direction, a reduction of one to two lanes each way. A lane of on-street parking and loading space, which is intermittent on the north side of the street (equal to about two blocks in length), will also be eliminated. In place of those lanes, separated bike lanes will be installed in both directions and the sidewalk areas will be expanded.

The expanded sidewalk areas will help realize the “Broad Street Terraces” concept, which hinges on constructing landscaped terraces that serve as green stormwater infrastructure, green space, and small seating areas. In some ways, the terrace borrows ideas from past Green Street projects elsewhere in Belltown, such as the Growing Vine Street and Bell Street Park projects.

Lastly, the plan identifies a redesign of Alaskan Way from Broad Street to Vine Street. The street will go from a four-lane road with a lane of on-street parking to a two-lane road with pockets of on-street parking and loading zones. A bi-directional cycletrack will be installed on the west side of the street that integrates with the Elliott Bay Waterfront Trail. The cycletrack likely will be extended in the future toward a cycletrack to be constructed south of Pine Street as part of the waterfront promenade. Notably absent in the plans is a protected bike lane connection to the eastbound bike lane on Broad Street, leaving a short discontinuity in the bike infrastructure plans. On the east side of Alaskan Way, the landscaping and sidewalk area will be extended further east and redesigned to include a multi-use trail on remnants of the former George Benson Waterfront Streetcar Line.

With the street concept adopted as a rule, pieces of the plan should see quick implementation as new development moves forward on the corridor. Voluntary actions and improvements by the City agencies would also help deliver the plan as envisioned by the local Belltown, Uptown, and South Lake Union communities that participated in the public realm planning process.