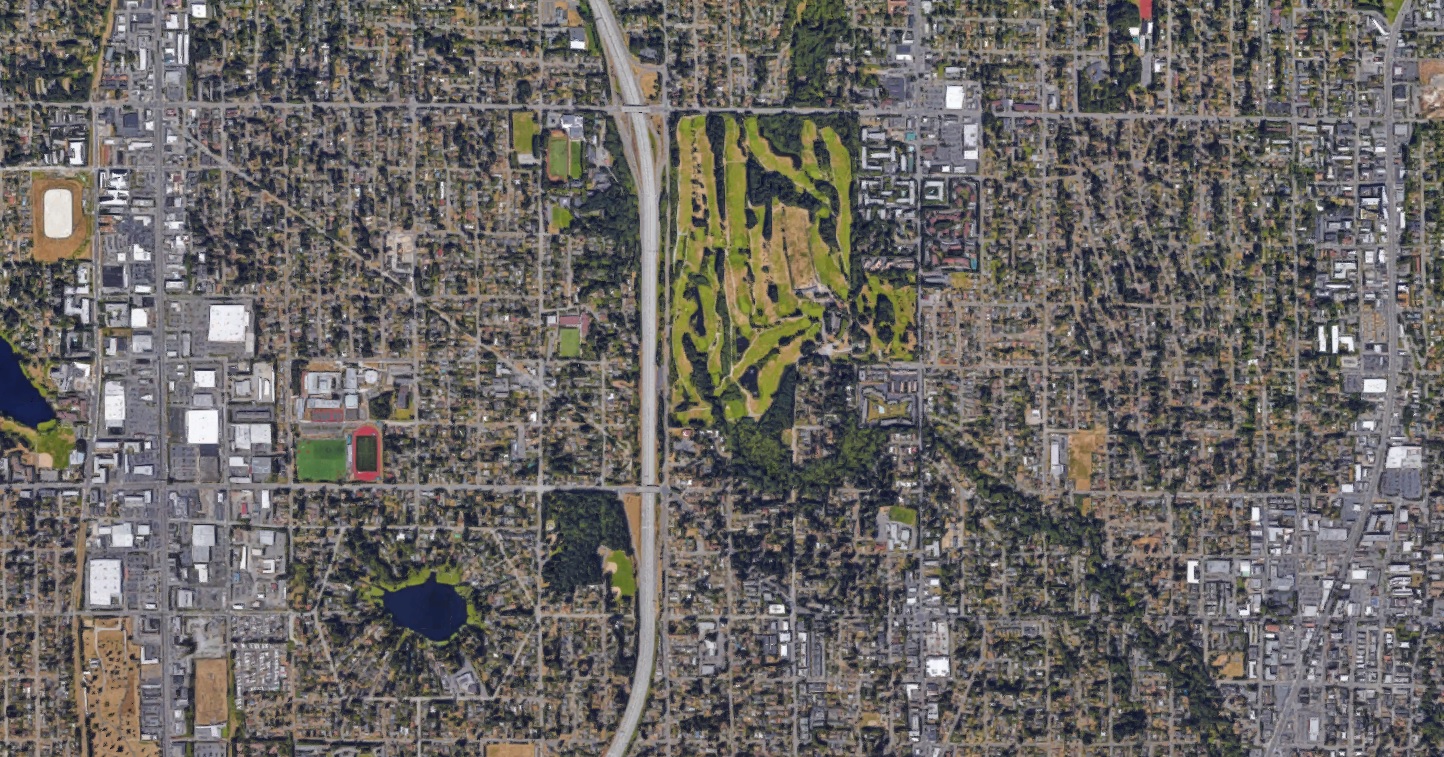 I want to tell you about 417 acres of land owned by the city of Seattle, about 1% of the Seattle that does not have a road on it. This land does not have any housing on it or city offices or facilities freely open to everyone. You have to pay money to use this land. This land is largely covered in non-native plant species, not rare or special non-native plants, but the most common non-native plant found everywhere. This land only gets 200,000 user visits per year, but despite costing money to use does not net the city significant revenue. Those 200,000 user visits per year probably represent fewer than 50,000 unique users per year1.

All of this land is very close to current frequent transit. It is near shopping, schools and other important amenities.

If you read my Twitter account, you’ll immediately recognize that I’m talking about our public golf courses. Before I tell you more about this land, let me tell you about a couple other issues of how we distribute resources in our city.

Last year, during our mayoral primary, one candidate, Nikkita Oliver, stood out for a reason that I think got a bit lost. One example happened when Oliver spoke with members of the bike community. The fellow that runs Seattle Bike Blog, Tom Fuculoro, posted about it. The main comment that got her in trouble:

But the real tough line that got me came when she called the Ballard Missing Link a “beautification project” that is “not an immediate need” during Candidate Survivor this week (17:25 in this video).

Additionally, I have to stress that our city is currently in a state of emergency around homelessness. I believe it is the duty of our city leaders to prioritize addressing these exigent human service needs first. This may require us to put some projects, like construction of bike lanes on hold in order to ensure that we have the financial resources to address the state of emergency around homelessness in our city.

The point here: if this is truly an emergency, then even some important projects aren’t important enough. Oliver got better at talking about this, and she continued to make this point.

In the summer of 2016, when the north police precinct project came out with an absurd cost, it drew the attention of many. Some believe that we have too much policing and spend too much on the police, which made the north precinct project obviously wrong. But even many folks for whom a new north precinct is a reasonable project were concerned that we were spending an outrageously large sum that could be spent on other priorities, like housing. I personally found it easily arguable that the entire precinct project should be put on hold because the police can make do with the office space they have and people forced into homelessness cannot make do.

Last year, now disgraced Mayor Murray proposed a $275 million dollar property tax levy to help pay for transitional housing, rent support and services for those without homes and similar. It was one of the first times I was impressed with Murray. A tax wouldn’t be popular but it would be doing something that was slightly better than fiddling around the edges and lamenting our lack of revenue. Of course, the reaction immediately showed it wasn’t going to go anywhere and he soon gave up on it (and soon after became ineffective due to the accusations against him). But it seemed obvious that if you own property you’re clearly doing better than someone who does not have a home at all.

When the HALA committee released their recommendations, one of them was that all residential areas in Seattle be zoned for more density including allowing duplexes and triplexes in areas that currently only allow single-family homes. This was met with immediate outrage and while Murray and others tried to push forward with that recommendation, they quickly took it off the table to appease the largely wealthy and overwhelmingly white homeowners of the city. We’re left with relatively minor zoning changes to our single-family zones that are very close to existing dense urban areas. Even that proposal is being met with legal challenges which will serve to delay and limit the proposal which can only further reduce the amount of housing that we could be building.

A couple weeks ago, I went to a public hearing in the Magnolia neighborhood about a project to decide what to do with some free land in the remnants of Fort Lawton. The history of this area of Seattle is perhaps a familiar one to much of the county:

The hearing I went to was much different than previous ones. Nearly everyone spoke in favor of housing, hopefully much more than what they are planning to build. It was inspiring and a welcome change from the last few years when I’ve felt housing issues were hopeless to address.

So what about those golf courses? I am not exactly advocating that we convert all the golf courses to housing, though if we did we could build 28,000 housing units and still reserve half as open space. Converting “parks” space to non-parks space is hard2. What I am asking is for folks to think about what our land use priorities say about us. What does it say that 1% of the usable (non-road) land in Seattle is devoted to a hobby only a small number of residents use and which you have to pay to participate in? What does it say during a housing crisis that this land is not only off limits but barely spoken about?

A popular claim in Seattle is that budgets are moral documents. Budgets seem like a boring negotiation of paying for this and that, but we are deciding who and what we support or don’t support. How we use and distribute our land is also a moral issue, one with a long history of exclusion. Despite all our wonderful parks, how we use land in Seattle shows little concern for the least well off among us. We require most of the land in Seattle used for homes to be large lots (5,000 square feet or more) and to contain no more than one detached home intended for a single family. This puts the cost of a home beyond many.

Historically, we also excluded non-white people from many of these same areas and have done little to repair this intergenerational harm. We have built relatively little public or affordable housing or provided paths to ownership for the non-wealthy. Even today, proposals to build affordable housing will result in neighborhood associations that organize to pressure it to be built elsewhere or not at all. And of course, public housing is now very expensive to build, as much as $320,000 per unit. After years of a so-called housing emergency, we need tens of thousands of units to meet the current need for affordable housing. The land is one of the largest costs to building, but even a single family home in such bad shape that it will just be torn down can cost $500,000 now.

If anyone in elected office or in a city department were to seriously propose converting even a small number of acres from our public golf courses into dense affordable housing—because surely housing for people is more important than having four golf courses—much of the city would respond with outrage. Too many in our city think we can solve the housing and homelessness issues without our wealthiest residents relinquishing our3power, privileges or resources. We care more about the privileges of single-family homeowners to only live near other single family homeowners, or the privileges of people who want to play golf, than we do the rights of people without homes. It’s reflected in how we use land and it must change.

Rachael Ludwick is a software developer whose been working in Seattle for eight years, living in North Beacon Hill with her partner, mother, and kiddo near the future Judkins Park light rail station (2023!). She’s currently the committeewoman to the King County Democrats from 37th Legislative District Democrats.

Rachael Ludwick is a software developer whose been working in Seattle for a decade, living in North Beacon Hill with her partner, mother, and kiddo near the future Judkins Park light rail station (2023!).