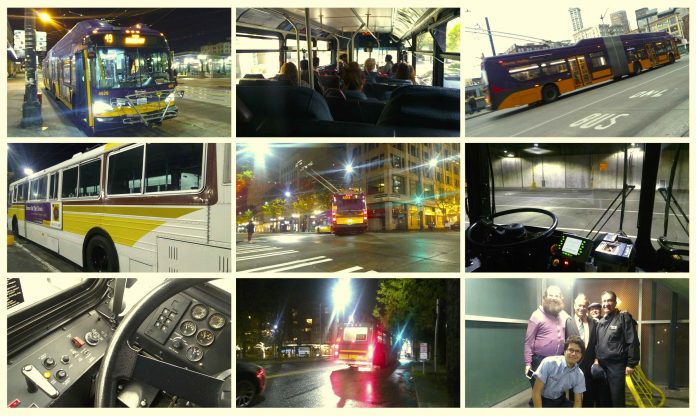 Yes, they vary wildly in temperament, outlook, attitude…but isn’t that what you want in a group of people? Look at them. There are so many reasons to become an operator, and accordingly you really do have all walks working here. There was a time when most any trade or service job paid enough to raise a family with; those days are long gone, and with them much of the middle class. Bus driving remains a unique anomaly (to the point that saying thank God for unions, as I do, is less a political statement than a practical one).

Some of them are authors, musicians, pastors, comedians, teachers, here so they can afford to live their passion. There are students, morticians, sports coaches, sneaking in for a few hours before heading off to the rest of their lives. Some of us have doctorates and MFAs (when the bus drivers in a city have four year-plus degrees, you know there’s something wrong with the job market…).

For others, this is highest-paying job they’ve ever had. The gateway to a new life in a new country, a job that actually pays enough to make the dream real. Others are single parents raising children, or homebuyers, or here because the benefits will cover procedures and operations that are important to them, their families, paths to having agency over their lives. Or it’s a second career, something you always wanted to do for a few hours a day.

Some of us just like to drive. The heady mental rush of stimuli.

Some of us appreciate the faux-military nature of the outfit, perhaps familiar from earlier days. Others enjoy having coworkers who speak their language, who pray in their tongue and that of their forbears. And some of us really, really like the people, forwarding the tradition of being on this Earth to serve others. You know how it feels better to help others than to be helped, better to give than to receive?

What all of Metro’s drivers have in common is an remarkable amount of aptitude and responsibility. By any reasonable yardstick of measurement, it is difficult to get hired here.

Every driver you see succeeded in jumping through hoop after hoop of licensing certification, written tests, appointments, aptitude tests, equipment knowledge, intensive customer service and operations training, driving tests… they showed up early to class every day for a month, because they knew if you’re one minute late, you’re gone.

They stayed up nights studying for the CDL walkaround test, memorizing all the different parts of the bus and what to look for when inspecting each one, so they could recite it and demonstrate their knowledge with no notes and no mistakes, as required.

They prepared for the infamous air brake test, the one so many of my friends have failed, which involves verbalizing and executing a series of fairly complex actions in a specific order.

They tried their hand at the even more infamous driving test, where you’re thrown out onto the streets of Southcenter, with the full knowledge that if you run over even one curb, you’re toast, and it’s six months of waiting before you can reapply. It’s six months of waiting with no guarantees if you fail at any of the above. All of my colleagues set themselves up for that challenge, applied themselves, knowing the stakes, and managed to succeed, every step of the way.

I find that impressive.

They show up to work now in uniform, every day, signing in within a grace period that’s measured in seconds. I imagine each operator is probably the most time-aware person in their respective friend/family groups. I know I am….

When I wave at my colleagues driving past, I wave out of solidarity. Only they know, truly, what it feels like to be behind that wheel. The particular aches in our shoulders. The way you can process the entirety of the city’s demographic and traffic flow geography instantaneously, on a micro and macro level. How we can roll our eyes together at the zany and ridiculous chaos of these multitudinous streets, together knowing the weird safety in not expecting people to be reasonable or do things that make sense. We’ve learned the weird bliss of not asking too many questions, of exchanging logic for humor.

I love you all, my fellow brothers and sisters in arms. I love the lively chatter at Atlantic Base, and I love the mellow rhythms of North. I love you when you’re happy, resilient, healthy in mind and body. When you help a blind customer cross the street…and when you succumb to the pressure and abandon your better selves. When you’re insecure, standoffish and angry. It has its challenges, this gig; but we do it together. I even love you when you’re watching that awful news channel on the North Base TV set. (Meanwhile, somebody please grab the remote….) But most of all, during every moment you inspire me by trying to be a good person.

Jack, Jesse, Patricia, Paul, Abiyu, Ibrahim, Michael, Greg, Dawna, Brian… the way they love the people. The way they keep an even keel, through all this ridiculous madness. Apathy is easy; they put in the discipline for something greater.

Siret and I, both running late today, planning out a way to share the load using two buses leaving at the same time. The Control Center won’t help us now, at the height of rush hour; we figure it out ourselves, with aplomb. Our combined efforts result in him getting a break at the terminal he wouldn’t have gotten otherwise– and he spends part of it with me, sharing food from his home country by way of thanks, in brotherhood.

The way we breathed a grin of exhausted relief at the end of the busy trip. No one else can understand the unique multitude of things contained in that grin. That’s the swagger I’m honored to be a part of, and excited to share on this blog with you.