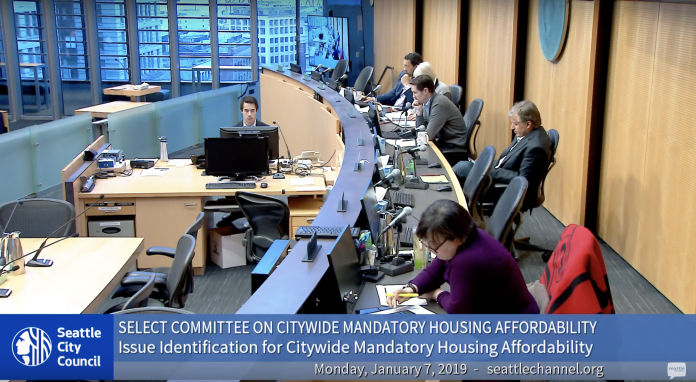 The Office of Planning and Community Development (OPCD) provided an update on work to wrap up an addendum to the Final Environmental Impact Statement (FEIS). In late November, Seattle Hearing Examiner Ryan Vancil ordered OPCD to consider historic resources but otherwise affirmed the adequacy of the FEIS. Since then, OPCD has conducted full analysis of impacts that MHA rezones could have on landmarks and historic districts.

OPCD took stock of designated landmarks by the Landmarks Preservation Board, eligible sites and historic districts on the National Register of Historic Places, and inventoried other historic resources. Revised maps identifying these areas and places will be published as part of the addendum to the FEIS. OPCD will also include recommended mitigation measures that the city could implement to protect historic resources.

To mitigate impacts to historic resources, policymakers could consider the following strategies:

Councilmember Rob Johnson expressed conceptual support for passing a companion resolution on follow-up actions to implement some of the recommended mitigation measures once the MHA rezone policy decisions have been made and the legislation is ready for final passage. Those decisions could affect what mitigation measures the city council should choose for separate action.

OPCD expects to complete the historic resources analysis by the end of January, which would pave the way for the city council to adopt MHA rezones. The city council has signaled the final adoption of the rezones could occur in March.

During the meeting, the city council was briefed on a slate of policy questions that could turn into amendments to the MHA legislation. The primary ones include the following:

Today, the Select Committee on Mandatory Housing Affordability will take up discussion on possible amendments to site-specific zoning and urban village boundaries for Council Districts 4, 6, and 7. The source of amendment proposals could be by individual councilmembers or members of the public. The discussion is anticipated to continue to a follow-on meeting this Wednesday (January 16th) for Council Districts 1, 2, 3, and 5. The city council will hold a public hearing on the totality of the “citywide” MHA rezone legislation, including changes to development regulations, on February 21st at 5:30pm. All of the meetings will be held in the Council Chambers at City Hall.