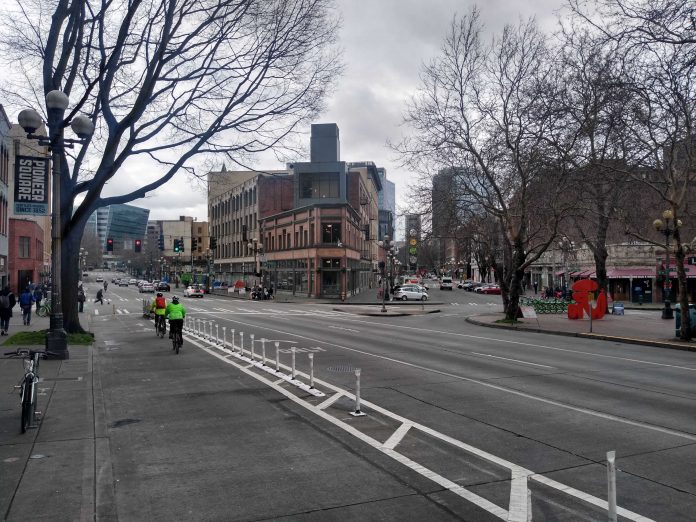 Seattle’s three official bike counters recorded more riders in January 2019 than any prior January on record. Now that’s worthy of the pomp and circumstance of a ribbon cutting; instead the local political brass were cutting the ribbon for the SR-99 tunnel this weekend–which opened to cars this morning–and hoping it was heavily used to justify its great expense.

The surge in biking shows that even though little was done to accommodate extra people biking during Seattle’s SR-99 highway closure, people will bike if it’s the most convenient and accessible option available to them. A dry and warm January absolutely played a role in the increase, after Downtown Mobility Director Heather Marx famously said that asking people to bike and walk in January was a “heavy lift.” But what’s also almost irrefutable is the fact that many of the biking trips replaced car trips that would otherwise have happened downtown if the closure had not occurred.

There were almost 73,000 trips on the Fremont bridge in January, 14,000 more trips than were made last January, the Seattle Department of Transportation (SDOT) reports. Spokane Street between downtown and West Seattle saw nearly 25,000 trips, more than 9,800 trips than January 2018, and the 2nd Ave bike counter downtown saw over 10,000 additional trips compared to last year, clocking over 25,000 trips last month. That’s over 34,000 extra trips that happened via bicycle and went past one of those three counters, or a 27% increase over 2018.

Where have all the car-boys gone?

Converting bike counter numbers into Seattle’s total number of daily bike trips requires some extra calculation, and SDOT hasn’t yet released those figures. Seattle Times reporter David Gutman took a stab at in his ‘90,000 cars disappeared‘ article that made the rounds. However, his method of calculating the increase only at the two main bike counters (ignoring that lots of bike trips don’t have to pass through them) undercounted severely, as Seattle Bike Blog pointed out. Instead of the 1,400 new bike commutes Gutman estimated, a more accurate number is likely at least triple that citywide, representing a decent chunk of the 90,000 trips shifted during the viaduct closure.

Numbers for people walking downtown, on the other hand, are not available, SDOT says. The department adjusted signals at many intersections to prioritize car traffic moving along the corridor, increasing wait times to cross the street for people on foot, on bike, and in transit. While vehicle traffic overall did not manifest itself in full gridlock on major thoroughfares, increased congestion has definitely resulted in more blocked crosswalks and intersections–the Seattle Police Department has admitted that it doesn’t prioritize enforcement so as not to exacerbate traffic even further with stopped cars.

Seattle will never know what a full highway 99 closure would look like with a complete bike network to downtown from all neighborhoods, but it would have if earlier plans for bike facilities had been followed through on.

With the Durkan administration completing a mere 4% of its 2018 goals for protected bike lanes last year, we are falling behind our commitments yet again. A resolution passed by the entire present city council last year outlined a laundry list of important connections to provide safe bike access to Downtown from all directions, but it isn’t binding, and the department hasn’t even released a list of the projects it intends to construct this year. The department has been working with the bicycle advisory board to cement a work plan for the remainder of the levy (through 2024) but even that list is subject to final approval by the Mayor’s office.

As we enter the next phase of the Period of Maximum Constraint, bicycle commuting will continue to be one of the most reliable ways to get to Downtown, as long as you can depend on a safe and accessible route. The city should get the backs of those residents who don’t currently feel safe using a bike to get downtown and fulfill its commitments. The dividends that will pay at the trip counters will show exactly what the numbers from January do: if it makes sense, people will ride.