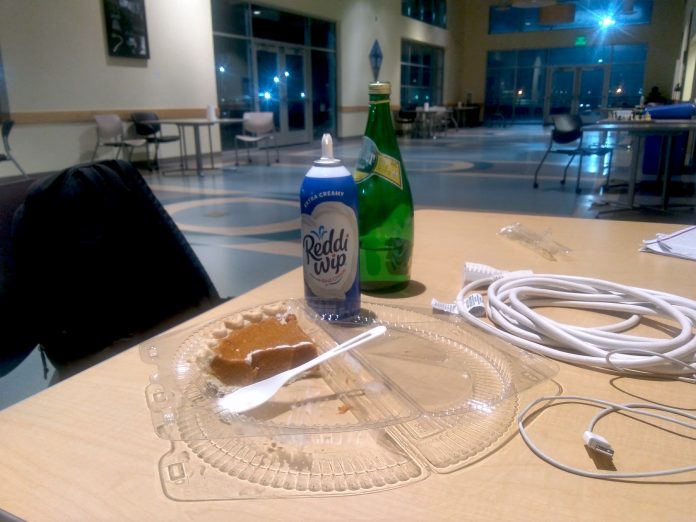 Here’s the thing. I love pie. How could I possibly answer his question? What am I supposed to do? Say I don’t like pie? It’s hard for me to lie, and especially about pie. Look at that crust.

There’s a 2013 interview with me where I say, “on rare occasions I allow myself to eat sugar.” Rare is a stretch, but I do attempt to avoid it. To pull off the this-isn’t-possible anachronistic oxymoron that is a skinny bus driver, you’ve got to make some sacrifices.

But the thing is: pie. And more than that– the gesture. Let me explain.

It’s my last trip in from the U District, a 49 to Broadway only. These trips are odd; they deviate from the regular 49 route in Capitol Hill, and rather than going downtown they essentially duplicate the streetcar routing from the Hill down to Vietnamtown and Chinatown on their way to the base. There’s no regular bus service along this stretch, and if you choose to pick up people out here, you could be helping in a big way, and not just because the streetcar is laughably slow; it stops running at 8 P.M. on Sundays (despite serving Seattle’s premier nightlife neighborhood), and is easily delayed when carshare vehicles or others block the tracks. Like tonight. Look at those beached whales– er, I mean two streetcars, across the street, helplessly stuck behind cars parked just so. Ah, what a trolley bus can do that a streetcar can only dream of…

These lost souls had been waiting a while. A fellow with one working leg and a lot of groceries on wheels, and a scruffy gent with a walker saddled with clothing and secrets; a silent woman, her mood perhaps frozen cold by the wind; a bespectacled young lady desperate to get home and thrilled at my unexpected appearance; a sleeper who got turned away from the U District shelter, having arrived too late. A hipster who thought I was the official ‘streetcar replacement,’ a planned event, though I was merely an accidental savior. Not a bad crew.

“So what route is this?” asked the gent with the walker.
“Well, I was a 49, but now I’m just going back to base, and thought I’d pick up some of the folks.”
“Get some of the stragglers?”
“Exactly! We got plenty of room in here!”
“Man, good on you, man. You gotta one of the best bus drivers out here, hands down. Sheesh. Pickin’ up people when you don’t even have to!”

They told me of other stories of people helping each other out. The best was an anecdote during last year’s snowbound Christmas, whereupon the speaker had been allowed by a driver to warm up on her bus, and who then helped navigate the driver through neighborhood side streets to get around blockages.

I felt a twin joy inside me, made partly from the joy that surfaces when one has helped others and feels the resulting appreciation, and also the burgeoning peace that comes from slowing down. We were taking our time. No need to rush through this traffic. We’d cycled the ramp and kneeled the bus a few times, missed some lights… And everything was fine. Route 49 deadheads may be essential service and are actively sought out by those in the know, but they aren’t listed on the stops; these folks were on a bus they never knew would come.

I helped Walker Guy on his way out. “Lemme come out here,” I said as I stepped in front of him and out onto the sidewalk. “I’m always scared people are gonna pitch forward.”
“Thanks man. It’s heavy.”
“I got it. There we go.”

Which is when he asked the pivotal question. The pie question. From the top of his walker, stacked on some clothes, he magically withdrew a half a pumpkin pie in its plastic casing.

“Do you like pie?”
“Well. I mean, yeah, I love pie. But are you sure?”
“Dude, I don’t need this. Here.” He didn’t just hand me pie. He handed me unopened pie and a can of whip cream that was still cold, with a plastic spoon sealed in a wrapper. There was an endearing quality to the gift. The pie accoutrements of spoon and whip, so instantly proffered, and the unglamorous nature of the pie, probably a QFC pie.

For me, the simpler and plainer a meal is, the more fully it is recognizable as a gift of kindness. Fanciness has a way of diminishing meaning sometimes. This wasn’t pie that you eat. It was pie that you appreciate as the gesture of gratitude it is.

Later, inside, I tried to pass on the gift of gratitude, but failed miserably. I accosted Mr Groceries as he wheeled out on the ramp. He’d been telling me his holiday pie recipes after seeing me walk back onto the bus newly gifted.

His expression conveyed that he knew the gift of this simple pie was a gesture intended specifically for me, and that I should bask in that because it wasn’t meant for anyone else.

So I sit here now, at 01:56 in the morning, trying not to eat this pie but loving it all the same. That man was so excited about people being good to other people that it was worth it to him to give away an entire pie, plus accoutrements. And he didn’t exactly look like he was made of money. More like the opposite. But it was the importance of the gesture. He wanted to return the act, keep the flame of goodness exchanged alive.

I may get a lot of holiday gifts this season, but I don’t think any of them will quite match the humble vastness of his offering. The things that hide in plastic silverware, store-bought dessert you only nibble at, and whip cream you don’t use. I may never finish this pie, but that doesn’t mean I don’t love it.