Living In Seattle, I am flooded with calls and texts from loved ones across the continent inquiring if we are OK. It is a warm feeling amongst the darkness how we mobilize and show up for each other.

“I’m off to do a grocery run for my friend because he can’t leave the house,” I say, closing a call.

“How are you gonna do that, you don’t have a car?” exclaimed my dear friend.

The following pause had made it clear that the eye roll I am infamous for was piercing through the phone straight at him. Conversations like these are basically platitudes for commuting cyclists, but they bear repeating. In times of disaster, these conversations are telling of our collective conditioning. Even with this friend, who was once a candidate for a cross country bike tour with me.

It is the 17th of March, 2020. I saddle up and ride out to greet the day. Seattle is sunny, warm, with a brisk wind. It is quiet. One can hear the birds. Without the roar of the nearby road, I can hear the flapping of crows wings overhead. The obvious is made clear and I am struck by the basic truth that yes, birds flapping their wings make noise. You just could not hear it before. Telling.

The spread of COVID-19 in Seattle, while deadly serious, has shifted longstanding paradigms to a new normal overnight. There is opportunity in the cracks to ponder what kind of world we want and could have as we residents all dream of a return to normal. For a brief moment in the stillness, I imagine a future of my dreams.

In the last four years while living in Seattle, I have seen what can only amount to a double-speak of residents: media and politicians voicing a concern for climate change while giving a free pass to cars, only to turn around and express dread for the city’s growing traffic problem. As a city, we are ranked as one of the worst in the country for congestion. Local radio station KUOW has initiated a reporting series on transportation and mobility in Seattle, and I have yet to hear the bicycle mentioned as a serious form of transport or remedy to the problem. The Seattle Times recently wrote a piece on new Amazon building construction in Bellevue, focusing on the congestion disruption. Again, no mention of incentivizing cyclists. Elected officials offering “we are a car-centric city.”

“A lot of people never use their initiative because no-one told them to.”

New York City just released a million dollar ad campaign with Billy Idol to encourage drivers to, well, not idle their cars and trucks. As an artist/illustrator, what I want to propose is a cycling public-relations campaign, invoking the PSA works of the New Deal era. Using the power of visual art to make the act of cycling both racially- and class-inclusive as well as the key ingredient: irresistible. We so often frame these conversations about what we have to lose, how about what do we have to gain? What would the stepping stones to that future look like? What kind of stories or narratives do we want to tell? My goal is to motivate, inspire, and draw wider, more inclusive circles in the world of cycling.

This kind of collective re-imagination of what we can choose to be is, to me, the embodiment of the better parts of our democracy. The better angels of our nature.

What if fighting the trajectory of a dystopian future leads to one where we are more happy and healthy? Both CNN and Forbes have reported that the reduction of air pollution in China as a result of their societal lockdowns following the COVID-19 outbreak have saved lives. Please let these reports illustrate how the collective “We” have become inured to certain types of casualties.

In Washington, when it comes to the cultural zeitgeist of driving, I think of Jim Inhofe, the momentary passage of Initiative 976, the short sightedness of a “30 dollar car tab,” and then I think about Ahab’s Whale. How one man’s singular white-hot obsession leads to near total ruin of the ship and its crew, leaving Ismael at the end floating on a coffin for survival. Telling.

Driving, and the metaphor of “cagers”, or the “behind the windshield mentality” is an excellent example of how strong the individual mentality is in the country. George Monbiot writes in his book Heat that we have been conditioned to see driving as our freedom and road blocks, speed signs or bike lanes as a direct threat to our freedom.

We, as a country, have not truly had to mobilize like this since the last World War.  As a country, these things are painful. No one wants to rip off a band-aid. COVID-19 is proving that, in the face of a mammoth public health crisis, it can and must be done. We can mobilize. We can act collectively. The PR campaign of Flatten The Curve could and should apply to carbon in the atmosphere as well.

“Only a crisis — actual or perceived – produces real change. When that crisis occurs, the actions that are taken depend on the ideas that are lying around. That, I believe, is our basic function: to develop alternatives to existing policies, to keep them alive and available until the politically impossible becomes politically inevitable.”

When things fall apart, I meditate on the thought of the Greek translation of apocalypse: lifting of the veil. “This Virus is breaking capitalism in Seattle!” I exclaimed to another friend. Indeed, the business-as-usual narrative has shifted in both the city and national conversation. At times, the tides have shifted so much that I find the need to pinch myself to remain present. The police are not processing evictions and more and more of the safety nets previously thought of as pie-in-the-sky ideas are rapidly becoming realities. Senator Mitt Romney proposed that the government should cut a check of a thousand dollars for every American. It would seem Milton Friedman was right, people are picking up whatever is lying around.

As a member of a non-profit bicycle kitchen in Seattle, my colleagues and I have experienced folks reaching out to us with questions requesting an introduction to cycling as the city continues to lock down. I wish the shop could stay open as a resource. At the moment, this is not an option. Yet at some point, this pandemic will pass and we as citizens (and those in power) returning to normal will have choices to make regarding what normal looks like.

The questions and concerns of steering away from a car-centric transportation model are great. However, I would argue that much like this Virus, incantation is an even greater risk

Shall we ride on to meet our future? 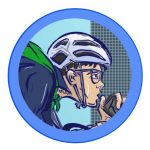 Reed is an active tour-cycling artist and soil-building enthusiast living in Beacon Hill, Seattle, WA.He has a strong background in agriculture and he enjoys volunteering at the Bikery on Hiawatha St. Follow him on Instagram @Reedonwheels.