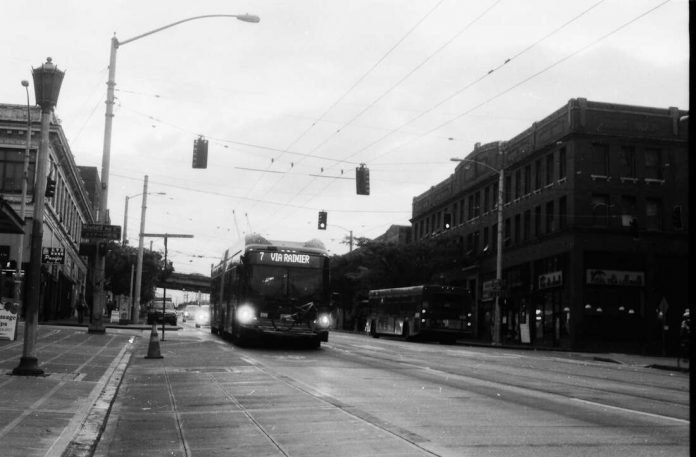 “People wait for your bus specifically. They say to me, Oh, I’m gonna wait for Nathan’s bus.”

So said Rahgeh, a fellow operator riding home on my night 7 after a long day of driving the E. We were laughing about why my bus was so full.

“Oh!” I exclaimed. “Yeah, I’ve heard that. Maybe it’s because they know I’ll give them a free ride.”
“Well also maybe because you friendly, you talk to them, nice…”
“Nice atmosphere, yeah. Maybe that’s why my bus is so crowded!”
“Yeah it’s a lot!!!”
“At eleven-thirty!!”

We were giggling. The bus being this full this late made no sense, especially on Sunday. Were some of them taking advantage of my kindness to get free rides or a warm place to lounge? Definitely.

But my answer to that would be, who cares?

I can’t do anything about that, and I’m not going to change my attitude towards all because of the actions of a small few– and who knows, perhaps a percentage of that few actually needs your help. You will never know. You have to give ten free rides so that the one person out of that ten who actually, desperately, legitimately needed you can benefit. It’s just part of the game. I try to go along with it.

His laughter subsided. We were drifting toward more earnest considerations. He said, “and your announcements.”
“Yeah I like to do some of the stops, or all of them if it’s busier, to let them know it’s a real person up here! Let them know that I care. I tell myself, I have to find a way to get along with them, because I’m going to see them again. Tomorrow, next week. Or tonight!”
“Yeah!”
“And if you respect them, talk to them, it helps everything. Of course you will have a few days out of the year that are really hard, but it’s okay. Most of the rest of it–”
“Yeah most of it, it’s pretty good. Yeah, I think so in all of life. How we look at it.”

The less often you’re on the 7, the more scared you will be of its people. Maybe the kids laugh at you because you’re white… And it stings, provoking thoughts in you you don’t like. Thoughts you know better than to have. I remember a 7 operator I trained with, blazing past a crowd of teens at a zone, because those were the days of unacceptable gang violence. I remember my black American colleague Alonzo telling an ill-mannered black girl, “man, you’re an embarrassment to our people.” I recall my driver friend Sonum saying “in the country I come from, if we talked to elders like those guys just did, we would get slapped.”

Yes, there is injustice out here, doled out by every demographic in every direction. But you can’t play judge, jury and executioner. You don’t know enough. You have to force within yourself the discipline to not be God, but rather just a witness. It’s enough to just bear witness. Try and get to know the people. That always helps, but so does something else.

Tell it to yourself again and again: Their morality is between them and the Universe. Yes, I believe in What Goes Around Comes Around, but I’ve realized in busland I don’t get to play a role in that. I have to prioritize the pleasant present, keeping things moving. If you can let people have the last word, this becomes a lot easier.

The operators I most look up to give out love without expecting anything in return. As a woman in a marriage once told me: In life, this advice isn’t appropriate. In a relationship it needs to go both ways. You deserve to be loved in return.

On the bus, things are different. You don’t need anything back. You’re teaching. You’re a saint– or, well, you’re trying to be. On the bus you are strong, self-contained, beautiful in your zen presence, infiltrating the air with respect and acknowledgement.

Look at you go.