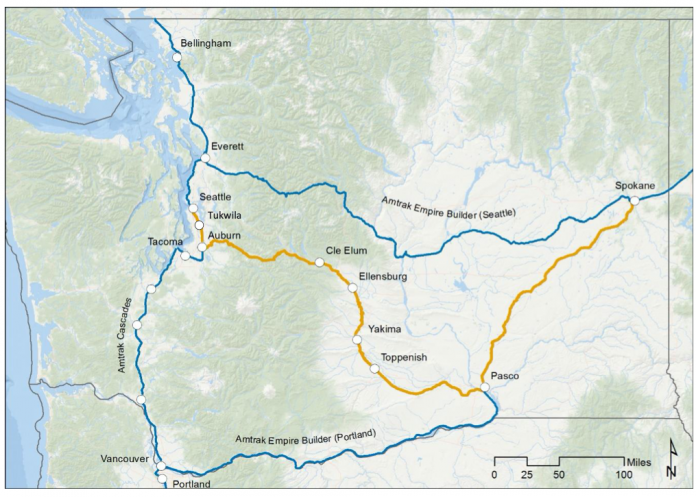 All Aboard Washington (AAWA) is pleased that the Feasibility of an East-West Intercity Passenger Rail System for Washington State (East-West) study previewed on Tuesday shows that passenger rail service between Seattle, Auburn, Cle Elum, Ellensburg, Yakima, Toppenish, Pasco, and Spokane is technically and financially viable. It is imperative that this preliminary study be followed up with a full analysis of the economic benefits that will accrue to the areas to be served by East-West passenger rail service via Stampede Pass.

In the current fiscal environment, we believe that East-West passenger train service will provide a significant environmentally-friendly transportation alternative using existing infrastructure at a reasonable cost. The proposed infrastructure upgrades will be an important part of Washington’s economic recovery plan, and will lay the groundwork for a statewide multimodal transportation network featuring a modern rail system. AAWA is concerned, however, that the study’s “key findings” do not appear to reflect the data included in the report.

The key point stating that East-West service will have “low expected ridership” is not borne out by the study’s own estimates. The ridership projections suggest up to 205,000 yearly riders for the twice-daily service between Seattle and Spokane, though this number varies, depending on which option is ultimately selected. The study compares these estimates to ridership for services such as the Amtrak Cascades and North Carolina’s Piedmont/Carolinian, both of which have more daily round-trips than the one to two proposed by the East-West study.

What the study does not state, despite providing the data to support it, is that the East-West service would perform remarkably well given the population density of the areas it would serve, and long run times. In fact, a key insight from the data provided is that this corridor is likely to benefit from more frequencies than are currently being studied. Amtrak route performance data shows that corridor ridership grows considerably once at least six to eight daily roundtrips are offered. We assert that more frequencies would significantly increase East-West ridership and, therefore, should be studied at levels similar to the Carolinian/Piedmont and Cascades corridors.

The study’s conclusions are predicated on the assumption that long travel times (8 hours 35 minutes) between Seattle and Spokane would make this train line uncompetitive with driving or flying, regardless of ticket costs. The study includes slightly higher ridership estimates for a service taking an hour less, but says that it “has not fully investigated” options such as using tilt-train technology that could reduce travel time over the tight curves in the Stampede Pass section of the route. The study also does not take into account traveler preferences for higher safety, reduced stress, improved reliability, and better environmental friendliness. AAWA questions these assumptions because of the nature of the travelers who are most likely to ride East-West passenger trains.

While AAWA recognizes that budget and timeframe constrained the current study, we are disappointed that the results give an incomplete picture of how East-West service could generate ridership and, more importantly, societal benefit.

For example, the study fails to identify potential sources for local funding contributions. The original Request for Proposals from the Joint Transportation Committee recognized the need for local communities to partner with the state in the creation and operation of East-West service. ADA-compliant platforms are necessary, but the study seems to assume that the state would bear the full, high costs associated with new station buildings, even though most communities along the route still have their historic stations intact.

Local funding opportunities, similar to the community-supported stations at Leavenworth and Olympia-Lacey, have not been identified in the study. In addition, the ridership estimates exclude induced demand, transit/intercity bus restructuring, demand in the Seattle-Auburn corridor, and diversion from air travel, among other factors.

AAWA is disappointed that the study development process included very little opportunity for stakeholders and citizens to participate. AAWA’s Luis Moscoso was named to the work group that was to have overseen the study, but the group had only one short meeting during the study process. In addition, the stakeholder meetings described in the report were very poorly publicized.

In spite of the limitations of the East-West study, AAWA believes that it can and must be the basis for fulfilling the 1993 mandate of the Washington State Legislature to create east-west service. Quoting from the Executive Summary of the 2001 study:

“In 1993, the Washington State Legislature established the goal of introducing high-speed* ground transportation between Seattle and Spokane by the year 2030 (RCW 47.79.020).

“…Local communities across eastern Washington support this service, but they also believe there is a need for a new, intrastate passenger train that travels during daylight hours.”

The 2001 report pointed out the need for further analysis of the Stampede Pass route to obtain accurate ridership, scheduling, and cost information. Twenty-seven years later, All Aboard Washington believes it is long overdue for the state to move forward with this sorely-needed project.

AAWA is reviewing the study in more detail. We will host a discussion of our findings during the upcoming Central Washington Passenger Rail Summit on July 11. Registration for online participation is available on the AAWA website. The event will also be broadcast on TVW and streamed online. 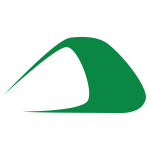 All Aboard Washington (Guest Contributor)