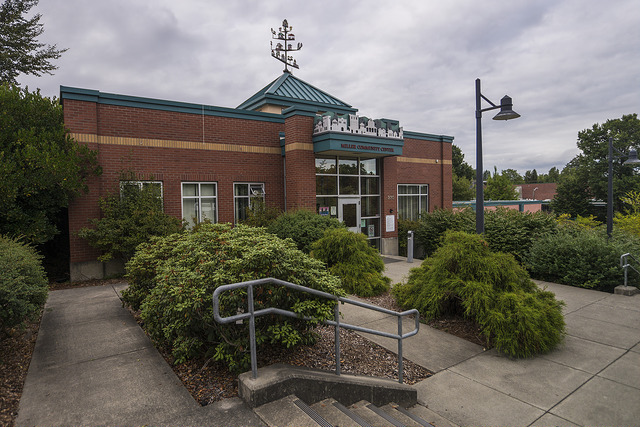 In 2018, Seattle Mayor Jenny Durkan announced that the Miller Community Center would soon be home to a $3.3 million solar microgrid. This project is being funded by Seattle City Light and Governor Inslee’s Clean Energy Fund. Construction is expected to be completed in 2020.

The microgrid will feature a 200 kilowatt (kw/the output capacity), 800 kilowatt-hour (kWh/the storage capacity) battery energy storage system. This is enough output and storage capacity for twenty thousand 10 watt LEDs to be powered at once for four hours. More practically, it’s enough to power an average home for almost a month. The battery system will be charged through a 50 kW rooftop photovoltaic array.

The demonstration project is aimed to improve the Capital Hill neighborhood’s grid resiliency and grant Seattle City Light technological knowledge on the installation and operation of a microgrid system. Through a partnership with the University of Washington (UW), the city seeks to gather analytics for research and development on microgrid technologies.

The potential of microgrids

A microgrid is a group of interconnected energy consuming units, electrical components (loads) and energy resources (generation and storage), within clear electrical boundaries. It acts as a single controllable entity with respect to the grid with the ability to communicate two-ways between the utility and customer.

Rudimentary microgrids often just deploy a carbon generator to maintain power during outages; grocery stores, hospitals, and other use cases during outages. Over time, the definition of the microgrid has expanded to encompass utility support, and generation and load management.

Local generation of energy lends microgrids energy efficiency boons. Electricity generated locally incurs much less loss than electricity that has to be transmitted from a long distance. Generally, 8% to 15% of energy generated from distant and centralized sources is lost during the transmission and distribution process. That energy is usually lost through heat production from the Joule’s first law.

All of this energy savings translates into less energy needed in the first place, reducing carbon costs related to generation and infrastructure. Not only is microgrid technology a potential part of reducing our carbon footprint through energy efficiencies, it will also be critical to integrating renewables.

Microgrid controllers leverage smart grid technology to utilize internal resources for high renewable generation integration. Energy storage systems can be used to maintain steady frequency and voltage in a power network, and perform other energy services. A comprehensive microgrid system will be able to maintain an energy supply in areas of high renewable adoption.

Solar energy is probably the strongest positioned to be incorporated into urban microgrids. The Urbanist previously covered how the rooftop solar could power Seattle. Microgrids provide a robust platform for high solar integration; pairing the energy source with an energy storage system and an advanced control system creates compelling economics.

An MIT study found that microgrids with solar generation significantly reduced energy demand. Researchers also found that Cambridge, with twice the population density of Seattle, could have half of its energy demand covered by 20% solar adoption on residential rooftops during daytime hours.

Not only does microgrid technology allow us to reduce greenhouse gas emissions, microgrids are also an application of smart grid technology that specifically increases the energy resilience of serviced areas.

When macrogrid outages do occur, microgrids sustain electrical generation that increase the resiliency of their localities by sustaining services needed by restoration crews. Energy security is strengthened by the redundancy created by microgrids and a layered grid system.

Climate change and rising electricity demand furthers the need to improved our energy security. As demand for electricity increases, so does the threat and damage posed by outages. The United States is already feeling the strain of evolving energy needs.

In 2017, seven blackouts were caused by over-demand. If changes to the grid are not made, continued electrification of the American automotive fleet and other devices will increase risk on over-demand driven outages.

Costs can be mitigated by the sale of metered electricity and thermal energy(heating, hot water, steam, cooling) to consumers within a microgrid’s network. Additional mitigation can be achieved through sale of excess electricity to consumers on the wider macrogrid.

A hindrance to microgrid development is state law regarding solar energy sales. Under current Washington state law, excess energy generated from solar systems up to 100kw are granted Kwh credits rather than cash credits that larger solar systems are granted for excess generation. A 100kw system would require 656 square meters of roof space, and the average residential solar electric system size in Seattle is 7kW. Additionally, Kwh credits are lost if not used within a year.

Current policy may hinder small players from engaging in a microgrid-enabled energy marketplace, reducing the incentive for households to adopt solar systems just under 100kw. If microgrids ever become more commonplace, policy needs to adapt to enable renewable energy platforms.

Microgrids have the potential to be a model we use to modernize the United States and local electrical grids. Overlapping microgrids over our existing system could increase the capacity, reliability, and resilience of our overall electrical system. Its especially local element makes it a compelling option for our cities.

The Miller Community Center microgrid system will be a valuable introduction of microgrid technology to Seattle’s people and institutions. The Capital Hill area will be the first to benefit from the microgrid, other Seattle communities will benefit from a more capable Seattle City Light.

If the Miller system performs well, data collected by the UW will support further development of microgrids in the Seattle area. The upcoming Green Lake Community Center redevelopment could be an opportunity for more Seattle microgrids. Perhaps a Department of Housing project could be used to trial a microgrid on residences, and eventually neighborhoods.

Microgrids are tools to grant localities more autonomy over their energy security. They further protect our evermore electricity dependent way of life. Moreover, the technology empowers cities to have greater ability to mitigate climate change.