We will never return to the world as it existed before the COVID-19 pandemic. Over the last year and a half, Seattle residents have lost jobs, friends, and neighbors to a deadly virus that changed how many of us work, school, and socialize.

Seattle residents fortunate enough to transition to virtual work or school were faced with a second barrier – unaffordable monthly internet bills or bandwidth too slow to accommodate the needs of a family attempting to work and school from home. Fortunately Seattle has been researching a solution since the late 90s: building a municipal broadband utility to ensure all Seattle residents are able to connect to the internet. This November, voters have only one choice if they want to elect a mayor committed to finally bringing us municipal broadband: Lorena González.

Municipal broadband, a publicly-run alternative to the privately-run monopolies currently providing internet service to parts of the Seattle area, has grown in popularity over the last decade. Approximately 900 communities across the country are served with some form of public network, much like how Seattle City Light provides low-cost and environmentally-friendly electricity to every house in the city.

Councilmember González has supported municipal broadband since her initial run for office in 2015. While in office, councilmember González voted to incorporate adding municipal broadband into the city’s comprehensive master plan. As the city council transitioned to an all-online public comment system, González repeatedly brought attention to how Seattle’s failure to build out a public broadband network created additional barriers to civic participation for communities already struggling to thrive in an expensive city.

Unfortunately, there is only so much a city council can do in the face of mayoral opposition.  Fortunately, this November Seattle can elect a mayor fully committed to building out a public internet utility.

Seattle’s next mayor will be sworn into office with a supportive city council in the aftermath of a deadly pandemic that demonstrated more than ever that high-speed, publicly-owned internet access is a necessity, no different than water, electricity, or garbage service.

Her opponent, Bruce Harrell made his fortune as corporate counsel for CenturyLink, and would rather record ads for Comcast than offer Seattle voters meaningful competition when it comes to internet service. During his time in office, Harrell was openly adversarial to any policies that would hurt CenturyLink and Comcast’s profits, and used his power on the council to thwart Upgrade Seattle’s push for a municipal broadband pilot project. Even worse, Harrell publicly took credit for the work of activists and other councilmembers. Harrell’s willingness to lie to voters on this one issue ultimately led The Stranger to rescind their endorsement of him in 2015. They have not endorsed him since.

Seattle needs a mayor who is committed to investing in our city’s own technological future. This November, a vote for Lorena González is a vote for municipal broadband. 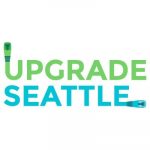 Upgrade Seattle is a grassroots group of Seattleites working to establish a city-owned internet utility with the goal of equity. We want to expand internet access to all Seattleites while improving speeds and lowering prices. Follow on Twitter: @UpgradeSeattle. Also follow our countywide partners at @UpgradeKC.