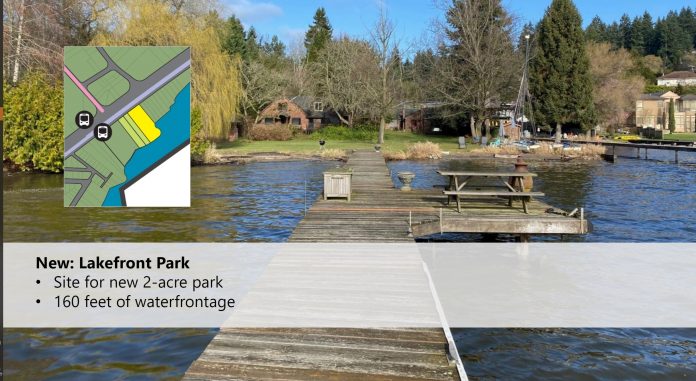 While Shoreline’s park bond measure did not make it to the November ballot, neighboring Lake Forest Park’s ballot contains a measure to increase funding for parks in this suburban city north of Seattle. Proposition No. 1 or the levy for walkways, safe connections, parks, and recreation also would also fund projects recommended in Safe Streets reports published in 2017 and 2018. Altogether, up to 20 projects with varying priority levels, and split evenly between parks and safe streets, have been sent to Lake Forest Park voters for approval.

Passage of Prop 1 would authorize the City to raise its maximum aggregate regular property tax levy to a rate of $1.57 per $1,000 of assessed value in 2021, and collection would begin in 2022. The levy should provide a permanent — so long as the city chooses — and annual $2 million to a special revenue fund for the levy proceeds. These funds would go toward implementing recommendations in the Safe Streets reports and the Lake Forest Park Parks Recreation Open Space and Trails (PROST) Plan. Accountability would also be enforced by a yearly review of the levy’s use.

Completed years ago with community input, a few high priority projects included in the plans have been waiting for funding to proceed ahead.

Safe streets projects around elementary schools stand out as top priorities for the LFP city council. The Brookside Elementary Safe Routes to School and the Lake Forest Park Elementary Safe Routes to School projects would provide dedicated pedestrian paths on streets lacking sidewalks and also add some bike lanes. Both of these projects are already shovel ready. Another high priority project would provide safe pedestrian access to Briarcrest Elementary school, which serves Lake Forest Park children but is located just outside of city borders.

In terms of parks, a new lakefront park emerges as the flagship project that the levy would fund. Next to the small Lyon Creek Waterfront Preserve, the proposed park would cover two acres and include 160 feet of public waterfront access. Lake Forest Park already owns the land, 90% of which was paid for by county and state dollars, so levy dollars would first go toward a two-year planning process in 2022, which would develop a master plan with park features decided by the community.

More proposed new parks, plus bathrooms, sidewalks, and other improvements

Tier two, or lower priority, projects include traffic calming for 37th Avenue NE, Perkins Way pedestrian/bike infrastructure, North Area pedestrian and bike connections, a sidewalk for 55th Avenue NE, and sidewalk projects at NE 187th Street, 184th Street, 47th Avenue NE. These projects would greatly improve safe pedestrian access to major destinations in the city, such as the Burke-Gilman trail, the Lake Forest Park Town Center, neighborhood parks, and schools. Fully built out sidewalks are not promised in any of these potential sites, but the city is in need of any improvements it can make to alleviate dangerous pedestrian conditions.

In addition to the lakefront park, two other new parks could be pursued by the City, which wants to develop sites at Five Acre Woods and Brookside Park into accessible parks on land it acquired in 2017. Both projects would include removal of invasive plants and restoration of native species. The plan for Five Acre Woods includes a trail network, while at Brookside Park, the city wants to renovate the fireplace and greenhouse, and add play and outdoor education space.

All existing parks in the city, with the exception of McKinnon Creek Trail Park, could also see improvements resulting approved levy funds. Pfingst Animal Acres could see the most investment: planned improvements include a renovated lawn, picnic shelter, restroom, zipline and play area, and ropes course. Big changes could also come to Horizon View Park, which could see the addition of a dog park, lawn renovation, and restrooms. The remaining five parks could see a mix of new play areas, seating, wayfinding, and planting plans, among a myriad of other improvements.

An effort to plan for tomorrow

Lake Forest Park is a small city with low taxes, leaving it unable to pursue projects like these without a major levy like Prop 1. Underinvestment currently leaves glaring inequalities related safe street infrastructure throughout the city, with more recently annexed neighborhoods suffering the most from poor pedestrian conditions. Despite its name, Lake Forest Park’s residents have some of the lowest park lands per capita in the area. In fact, the public only has access to a tiny .89 acre waterfront preserve right now. Two private clubs are the primary way for residents to access Lake Washington, so the levy would significantly expand public access.

The levy will only lead to a minor property tax increase of 4.9% for the first year with the average homeowner paying $30-40 per month. Future city councils will be able to lower the levy amount if deemed necessary, but the percentage will automatically lower if there is increased housing supply and/or an increase in property values since the levy only allows the city to collect a flat $2 million annually. Future parks, recreation, and safe streets projects could be funded by the levy, but increased maintenance costs and inflation may chip away at the flat levy’s ability to achieve future goals.

With many priority projects already lined up for funding, the current levy would go a long way toward ensuring fairer park access and securing safer streets in Lake Forest Park. Prop 1 is a good start and deserves voters support.

Find more information at a community discussion and a pro and con forum on Prop 1.