Baron Harkonnen answers a question with another in the movie Dune, based on the Frank Herbert sci-fi saga of royal houses’ murderous struggles to control the desert planet that produces the most valuable substance in the universe.

With the infrastructure bill that the president signed on November 15, we would do well to ask ourselves the same thing.

There are some things in the bill that are just plain good. Getting rid of lead pipes in the water distribution system across the country. Making sure rural areas have broadband internet access. Upgrading power lines to deliver the clean energy that we will, hopefully, generate tons more of. Supercharging superfund cleanup. Protecting vulnerable communities against droughts, floods, heatwaves, and wildfires.

All very good stuff that advances environmental justice by addressing some of the heinous burdens of pollution and climate risk that Black and brown communities bear.

But the transportation portion of the $1 trillion dollar largess could prove as ominous as when the emperor kindly lent Duke Leto of House Atreides his dusty little planet Arrakis.

Without forceful intervention from activists, and an unprecedented display of courage and imagination from state officials, the bill could very well end up driving up emissions and making inequality worse.

Working for a Just Transition in Transportation

That’s why Front and Centered, Disability Rights Washington, and many other organizations have launched our Just Transition in Transportation campaign. Front and Centered is calling on the state of Washington to adopt a frequent and accessible transit standard that will bring fifteen-minute service within a 10-minute walk to at least 50% of households served by each of the state’s transit agencies by 2030. A one-quarter mile radius around transit stops on the frequent transit networks should have a complete network of ADA sidewalks, curb ramps, and biking and rolling paths. Coupled with the new federal investments in capital for transit, this could be transformative in the lives of millions across our state, particularly for people with disabilities and people of color who typically make up 60% of transit riders.

The infrastructure bill does make a big investment in public transportation, the biggest ever by the federal government, reauthorizing the $50 billion for transit in the surface transportation act and upping the ante by $39 billion over the next five years. This will buy lots of buses and trains and pay to maintain and expand rail lines. What’s left unsaid is this money, as federal dollars for transit have historically been, is almost all for capital and requires a local match. In other words, to get federal dollars to buy new buses and hire new drivers, cash-strapped cities and counties will have to come up with money of their own, likely in new fees or taxes. Not so for roads and highways by the way; the feds pay 100% for those.

This is a powerful engine of inequality. Poor and rural communities in general, and especially Black and brown minorities in anti-tax areas dominated by Republican lawmakers, have little hope of getting transit funding measures on the ballot, much less passing them. Earlier this year, U.S. Congressman Hank Johnson (D-GA) proposed a fix with a bill that would have provided $20 billion annually specifically for transit operations. This would have been a game-changer for an unbelievable number of people across the country, for instance, increasing the number of jobs reachable within 30 minutes on transit by a factor of eight in parts of Atlanta.

But the bill which was cosponsored by 44 representatives including Pramila Jayapal and Suzan DelBene (and not a single other Washington congressperson) did not make it this time around.

As things stand, many of our state’s transit agencies have not even spent the dollars from the American Rescue Plan act intended to staunch the bleeding during the peak of the Covid downturn for fear of extending new service only to have to cut back when the funds run out.

This is no way to run a railroad — or a bus company.

Frequent transit should come standard for everyone just like running water, and electricity; not as an optional upgrade for wealthy urbanites. Yes, it’s hard to imagine transit for everyone from our car-centric moment, but in 1920 only 1% of houses had indoor plumbing and electricity and as late as 1960, 25% of houses lacked an indoor toilet or a shower. What changed is we made a commitment to dignity in housing for everyone and created standards in the 1930s and 1940s that are still with us today in the form of plumbing codes.

Like electricity and running water, public transit can be one of society’s great equalizers. Good, reliable transit opens up opportunities for everyone including those of us who can’t afford a car or don’t drive because we’re too young, too old, or have a disability. Put simply, creating more opportunities with fewer emissions should be one of the highest priorities in our society.

And now for the part of the Build Back Better bill that we really have to watch out for. By far the biggest portion of the bill goes towards ‘repairing’ the interstate highway system; plunking down $110 billion in addition to reauthorizing the dollars already in the surface transportation programs for five years. There is a catch, of course. Often ‘repair and rebuild’ means ignoring crumbling roads and bridges and building entirely new ones or vastly expanding them. The federal government, it turns out, doesn’t require states to ‘fix’ anything before building more.

The highway industrial complex has caught on that building more roads is not all that popular so they have come up with cagey justifications for building lots more roads anyway. These include congestion relief, safety, HOV and HOT lanes, and adding bus lanes. And even, emissions reductions.

Promises they almost always fail to deliver on because when we build more roads we induce more driving and create more congestion and emissions causing more health harm, more asthma, more cardiovascular disease, and drive up our climate-changing gases, impacts that are not borne equally. Blacks and Latinos breathe on average 56% and 63% more pollution than they make.

Unfortunately, until now our state transportation decisions have been made without regard for people’s health or the impacts to our climate. Clearly we have to change that. This fall, Front and Centered and our allies partnered with the Rocky Mountain Institute to launch the Highway Pollution Calculator that advocates can use to show elected leaders the impacts of the road expansions proposed for their communities during this year’s legislative session and beyond.

Now here is the ray of hope. Though the feds don’t require that we spend these dollars well, we actually have lots of flexibility in how we use them. Washington State could use this windfall for good, taking responsibility for maintaining sidewalks and delivering a solid backbone of frequent transit for the people throughout our state. This would be an unprecedented turn for our legislature and transportation officials at all levels. Let’s hope we can convince them it is possible.

Otherwise, we might find ourselves wishing we never got this generous gift. 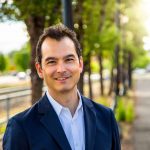 Paulo Nunes-Ueno is a consultant on sustainable mobility and Front and Centered's transportation and land-use policy lead.