Last summer, we started organizing block parties. We applied for a permit from the city, and blocked off either end of our street to through traffic, setting up folding tables and chairs on the street for weekly BBQs. The kids on the block loved it, and barreled up and down the block in a flotilla of scooters, trikes and bikes. The worst part was that after the block party ended, the next day, the youngest of the kids couldn’t understand why they couldn’t ride in the street anymore, why they had to try to maneuver their trikes on the cracked, and bumpy sidewalks. They would head out into the street and we’d have to be on extra alert, ready to grab them and steer them back.

In reading Peter Norton’s Fighting Traffic, I was both shocked and horrified to learn that playgrounds were actually the invention of the auto industry who, recognizing the backlash that cars in cities were creating when they killed children, manufactured a new narrative around the need for children to go to designated places to play, to get off the street, to leave public space. They were brilliantly successful.

There was a point, back when this neighborhood was first built as a streetcar suburb, when we could have let all the three and four and five-year olds on the block run between our houses. When playdates didn’t have to be pre-arranged by text and some adult on standby to make sure little bodies aren’t smushed by oblivious vehicles.

A hundred years ago, we ceded the public space of streets to cars, to the detriment not only of children, but to everyone else who might want or need to go somewhere without driving themselves. Not without contention, but eventually, car-dependence redesigned our communities and redefined how and where we worked and socialized. We now live in communities that have fully committed to life organized around the automobile.

As someone who this doesn’t and can’t possibly work for, I see the failings of this system all around me, failings of access, impacts on public health, the climate catastrophe auto-dependence has wrought. Going back isn’t possible, almost every part of our economic and social lives are built around car dependency. Even the smallest changes, like funding for a block of missing sidewalk next to a youth center, require herculean amounts of advocacy.

But more than that, car dependency has changed the way we interact with our immediate physical communities. We are less likely to encounter our neighbors when the closest physical interaction is passing each other in automobiles. We no longer frequent the same corner groceries or coffee shops because it’s so easy to hop on the freeway to Costo, to hit the drive-thru Starbucks on the way to the freeway, to drive our kids to school because “it’s too dangerous to walk.”

But we are social creatures. As the pandemic has taught us all, we seek ways to connect. We find other communities. We turn to online forums, to social media. And in these online spaces, it’s easy to find those who agree with us. The algorithms do that for us.

We are funneled into echo chambers and in these echo chambers, we create our own realities, sometimes without even realizing that those we are speaking to, those who are agreeing and liking and amplifying our thoughts are all trapped in the same small bubble with us. That these social networks have created many little universes that are all independently radicalizing, moving further and further away from each other as we stop interacting with those within our immediate physical geography.

And then the unprecedented heat dome, the turbo-charged hurricane or the once-in-a-100-year flood arrives. And it will arrive, because that is the climate destiny we’ve manifested for ourselves and our children.

And the power goes out.

My moment of reckoning came in 2012, when Hurricane Sandy hit New York. We were living in a commercial loft in Red Hook, a neighborhood in Brooklyn. Along with a number of commercial tenants, my partner and I, and two other artist couples lived in our units. None of us planned to heed the mandatory evacuation order. Hurricane Irene had passed through the year before, and there had only been two feet of water in a big puddle on the street. We figured it would be similar. But after it got dark, the water started rising, and rising really quickly. When it was about two feet, our downstairs neighbors left. An hour or so later, it was up to eight feet. Their first floor apartment was completely inundated. We didn’t know if it was going to keep rising. The power went out and we kept peeking our heads down the stairway to check the levels.

The next day we heard that our neighbor, who was pregnant, had given birth that night in the hospital after they evacuated. They lost everything in their apartment. The smell of water and diesel permeated everything for weeks. It’s a smell that still makes me gag when I catch a whiff of oil on streets after it rains.

Red Hook, right across the water from the glimmering towers of Wall Street, didn’t have electricity for two weeks. It was fifteen days before it was restored in our house. In the Red Hook Houses, one of the largest public housing complexes in the country, the boilers on the first floor flooded, and the tenants there were without heat or hot water for months.

I worked on a fundraising video for one of my union clients after Hurricane Sandy, who were trying to raise funds for members that had lost their homes in the storm. Hearing the stories of that night reinforced for me the idea that what matters most in surviving these climate catastrophes, perhaps just as much as wealth or resources, is knowing and caring for your neighbors. The communities that figure out how to meet people’s needs, even in moments of dire crisis, are the communities where people know each other.

And to this day, I feel terrible that I didn’t know our downstairs neighbors better. As they evacuated in the dark, we lent them a bike light to use as a flashlight. But we didn’t offer to help rescue anything out of their apartment, nor did they ask. Months later, after our landlord had gutted and repaired their home, they returned. They even brought back the bike light, which I still have in a drawer.

Because of what happened in Hurricane Sandy, when we moved to Seattle, I made it a goal to get to know everyone I could on our block. As we hosted backyard BBQs and the organized block parties, I learned it wasn’t just us meeting neighbors for the first time, many of them hadn’t known each other either.

It’s not easy to get to know your neighbors when your only interaction is yielding to let them pass you as you both leave for school drop offs in the morning. I dream about how different it would be if anyone other than our family walked to the bus stop. It’s easy to make small talk when you’re standing in a bus shelter with someone. But for now, my desire to build community and build resiliency is manifested through block parties.

And it’s working. Last time we were threatened by wildfire smoke, one of my neighbors texted me that he had an extra air filter, and asked me to check if everyone I knew on the block could use it.

Want to host your own block party? If you want to make it official, here’s where to apply for a free Seattle DOT Block Party Permit. 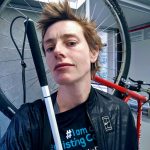 Anna Zivarts directs the Disability Mobility Initiative at Disability Rights Washington, where she is working to build a transportation system that is accessible to everyone, reduces carbon emissions, and remediates public health and environmental justice disparities. She sits on the Washington State Cooper Jones Active Transportation Council and Autonomous Vehicle Work Group and WSDOT’s Transportation Demand Management Executive Board.