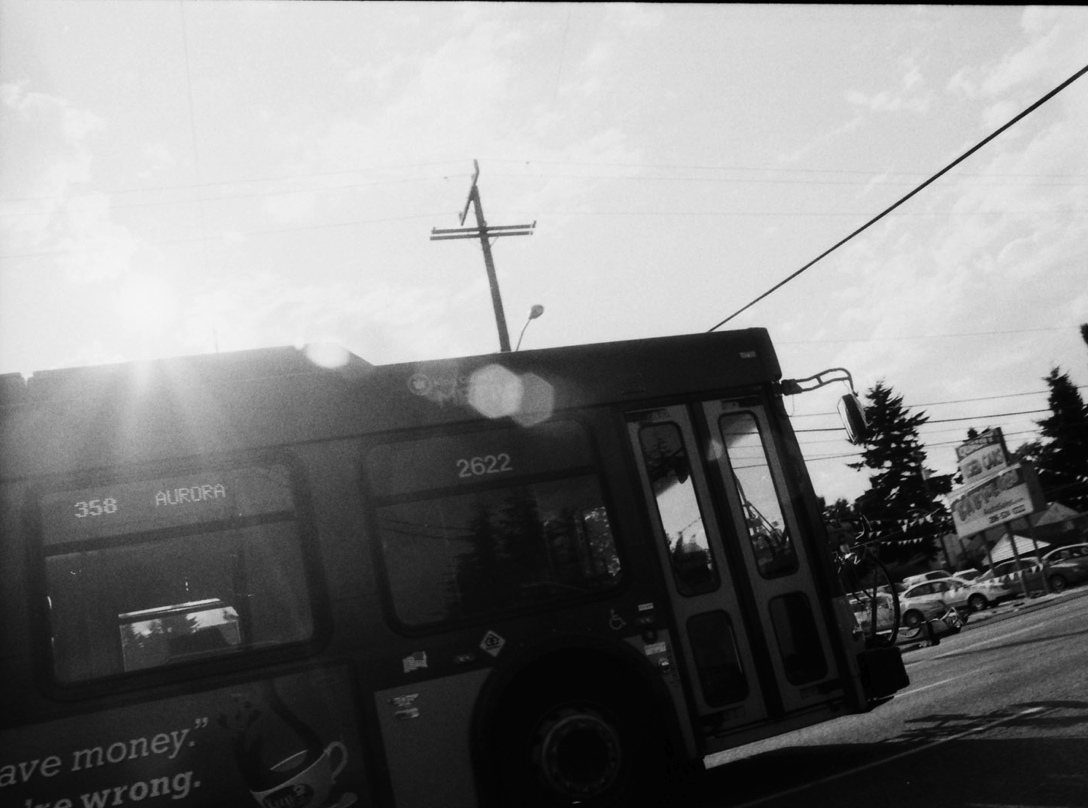 This post is a follow-up of sorts to two writeups from last year, “(Hopefully Not) The Last Day I Drove the 358,” Parts One and Two.

Her black baseball hat has some sort of lettering on it, black calligraphy on a black background. She tosses in the correct amount of coins for youth fare, shoulder-length curls framing clean olive skin and tastefully dark make-up.

“What does your hat say?”

Why did I say her cunt hat was awesome? Because a silent response would carry a meaning that wouldn’t be true. Silence would too easily be misconstrued as judgment. She’s trying to stretch the muscles of her identity, searching for herself in the far corners of adolescent expression, and in that respect her boldness is an inquiry to be commended. I’m excited for when she settles a little, relaxing into her being, able to calmly touch the shapes of who she is. She’s taking part in the great search, and that is awesome.

Earlier there was a runner, moving slowly, hurrying as best he could toward my first outbound stop at Second and Main. How could I refuse anyone on the last day? I’m Don Corleone, and it’s my daughter’s wedding. The runner turned out to be someone I knew- Ken, a shorter African-American gent in his forties, always with a ready smile. He’s general manager of a restaurant in Pioneer Square, and they’re in the process of renovating the building. We make the turns gently on Main and Prefontaine, and he’s telling me about an unfortunate hospital incident which led to his temporary inability to run for the bus. He’s still smiling though, busy as ever, and seems excited to find a seat and relax into the cocoon of a nice, long ride home.

I take it slow up Third. I want to get overloaded today.

“Hope you have a lot of tissues for everyone,” says an older gentleman boarding at Union.

“I know! I’m about to burst into tears myself!”

At Denny a woman in her twenties gets on. She seems uncharacteristically haggard, but excited by my attitude. I ebulliently announce the upcoming changes (“Starting tomorrow this’ll be called the E Line. E is for excellent.”), and we’re on our way up Aurora, merging with the afternoon madness of Friday traffic.

Later, at 46th, another older gentleman looks at me, accosting me with: “Okay. This isn’t gonna work. I’ll be needing to see some I.D.”

“Definitely not. I have a ways to go.”

“Well, you’ve got the edge, being young,” he says seriously.

“Well, the trouble with having the wisdom is, nobody listens to you. I got four kids, and they don’t hear a word I say.”

“That’s their loss,” I respond. “Instead of listening to you they’ll have to make a bunch of mistakes to get to the same conclusion.” Inwardly I’m thinking, as true as that may be, it’s unavoidable. In a way, we need this problematic aspect of existence. Our emotions and experiences feel new to us, though they’ve been undertaken by untold billions of others; love, joy, and pain are older than time, but they feel real when they happen to us. Would we really want it any other way?

“Exactly,” he said, in response to what I’d said aloud. I didn’t feel the need to voice my thoughts.

“How old are your kids?”

“I wonder about that sometimes. Having kids. Often I’m not sure that I want to.”

We’ve never met, but somehow it feels natural to quickly shift gears into a meaningful, personal discussion. Sometimes that’s possible with intimate family- and, curiously, with strangers. He’s telling me his fears of the dangers the world contains today, and I’m telling him how ill prepared I feel to tell others how to live, when I’m still struggling to work that out for myself. I want to tell him the world has always been a dangerous place, but we deal with it. Someone else chimes in, telling me we’re always trying to figure things out, figuring out how to exist. But we deal with it. We’re considering the angles, finding ways to agree with each other, and then a mob gets on and our older friend retreats with the incoming tide.

It’s a continual game of shifting gears. I find it exhilarating- each of these unique lives, with a contrasting set of concerns, each of us in a different space in life. A close friend recently told me no matter what sort of attitude a person confronts us with, we can realize we’ve experienced a similar frame of mind, or at least a similar root that could’ve led to comparable emotions. Through the stream of these wildly disparate parts of life I’m being confronted with, I realize we’ve all experienced similarities over the course of our lives.

Three Big Brothas (not the Orwellian variety) come up from the back to address me. The leader is walking a touch slowly.

“I was wondering I coul’ ask you a favuh.”

“I got to ask you fo’a courtesy stop jus’ pass 117th. We got to check out this motel tha’s right there.”

“Man thank you. ‘Cause I know after this you don’t stop until,”

On hearing that my thoughts from a moment before are reinforced. This man doesn’t know it, but Ken, the restaurant manager sitting a few rows back, is also having hip problems. That’s why he wasn’t able to run up to my bus as he normally can.

“No worries, man. Happy I could help.”

They go back to the back lounge, and I make the announcement: “okay folks, we’re going to make an extra stop tonight, just to be nice, far side a 117th right here, 117th. I got to ask us to use front door only here, front door only, watch your step tonight…”

Each of the three brothas thanks me from the heart. The last one, tall and skinny with corn rows, ducking his head to avoid hitting the ceiling, has in his eyes a gratefulness I only occasionally see even in people I know well. Maybe because he knows he may not see me again, the emotion is allowed to be an outpouring. I feel humbled; what a complete privilege it is to be here. There is the sensation of something tactile is being built in such moments. Stewardship, global and real, budding in the dirty blue shadows. Everything starts somewhere. “Tha’ guy’s hella cool,” I hear somebody muttering outside as I close the doors.

The uncharacteristically haggard young lady from Denny comes forward. I say uncharacteristically, though I see her only rarely, because her sad look appears out of place on a face built for smiling. Periodically I had glanced in the mirror, noticing her taking in the ride.

“Seven can be good.”

“Yeah, seven can be pretty awesome. Are you ready for the weekend?”

“You and me both! There we go,” I say, pulling up to the stop. “Treat yourself to something nice tonight.”

“I will.” She seems rejuvenated by the idea. “Thank you!”

Ken himself comes up at 145th. Before he’s even at the front I’m already talking to him: “Restaurant mus’ be busy tonight! Valentine’s!”

We get back to the renovations he’d been discussing. I’ve been to his establishment before, and can picture the layout.

“I remember you said there was all kinds a red tape, ’cause it’s- is it a Historical?”

“Yup, it’s classified as a Historical (building). But lemme tell you, when we took out the floor of the stage and seen what was underneath, I couldn’t believe those last couple a bands didn’t bust through the floor!”

“Oh, the amount of wood that was rotting, everything falling apart,”

“You’re a pro though! I know you’re gonna make it look beautiful!”

“Thanks. Hey, I’ma get off at Walgreens here tonight, go look for something for the wife.”

We cackle with laughter and do a great big handshake.

“You too, happy Valentine’s day!”

At the end of it all the cunt hat girl steps out, the last passenger of the evening. The bus’s signage changes automatically to “North Base,” having displayed “358 to Aurora Village” for the very last time.

“Have a really good night,” I say to her in a meaningful tone.

It felt important to me to get that last exchange out. I wanted her to know there are people who don’t look down on her, and that I certainly wasn’t judging her for her 358-appropriate hat. It’s a frame of mind we can all relate to.