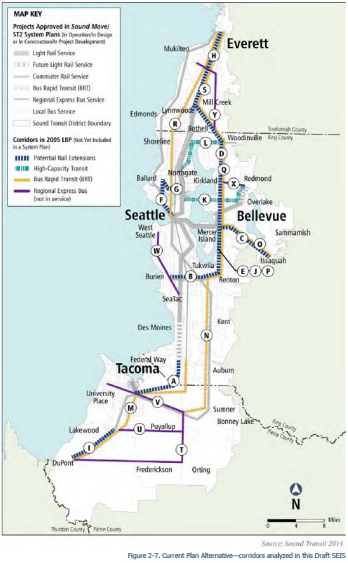 Ambitious training–Sound Transit is doing just that and in spades. With the unfurling of the Draft Supplemental Environmental Impact Statement (DSEIS) last week, ST’s leadership has given us urban/transit nerds a taste of what may be proposed in a future ST3 package. To the right, we see the 2005 Current Plan Alternative map for light rail and high capacity transit (HCT) with the alignments outlined below.

A. Tacoma to Federal Way

B. Burien to Renton

C. Bellevue to Issaquah along I-901

G. Ballard to University of Washington1

K. University of Washington to Redmond via SR-5201

1Portions of these corridors could be constructed in tunnels.

We’ve known for some time about most of these corridors, but what we didn’t know before was that some corridors could be constructed by tunnel. In the 2005 LRP, there was no mention of that potential. This gives further credence to the hopes that Downtown to Ballard and Ballard to the U District will in part, if not wholly, be achieved via tunneling. NW Seattle needs another route across the ship canal. And not just any new route, but one that is quick and hassle-free. Everyone in North Seattle can agree that going east-west, west-east is a pain considering the distance and inevitable congestion. Light rail in a tunnel mitigates both of these current pains.

To the right, we see the 2014 DSEIS Potential Plan Modifications Alternative map for light rail and HCT with the alignments outlined below.

5. Lakewood to Spanaway to Frederickson to South Hill to Puyallup

6. DuPont to Downtown Tacoma via Lakewood, Steilacoom and Ruston

8. Downtown Seattle along Madison St or to Madrona

10. North Kirkland or University of Washington Bothell to Northgate via SR 522

11. Ballard to Bothell via Northgate

14. Tacoma to Parkland via SR7

A potential new tunnel under Downtown Seattle could also or alternatively support a Ballard-to-Seattle light rail line, which is included in the Current Plan Alternative1.

Under the current plan alternative there are eight corridors. Under the potential plan modifications alternate, there are 15 and that doesn’t include the three HCT corridors. I mean, how sweet is that?

And from first glance, I like what you’re showing ST. We’re seeing at least the following being proposed as potential modifications for the updated Long Range Plan:

Once again, the 1footnote, hopefully indicating a strong willingness to build Downtown to Ballard via tunnel.

Now, there are lots of other goodies in the DSEIS to get excited about (like buses and streetcars all over the place!), and I encourage you all to dive in and see them for yourselves. Once you’re done with that, please provide feedback on what you think of this draft before July 28, 2014, it will only take a few minutes of your time. Remember that there is arguably a ton of power in your feedback.

In the Downtown to Ballard Study results, a resounding 76% of respondents indicated a preferred alignment that would be fully grade separated. The study also found that the alignment would have the highest ridership. In my humble opinion, that is exactly the type of investment we should ask for because the infrastructure being constructed will be long-lasting. Remember to get your comments into ST before July 28th, and then shoot us a comment on this article about which potential plan modification alternative you are most excited about!