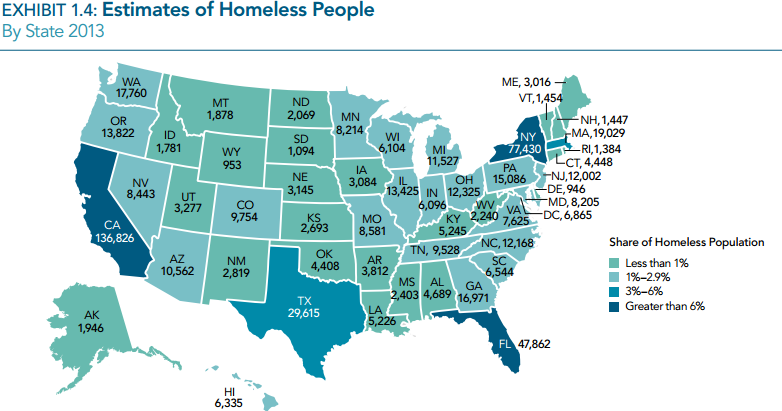 (There’s a lot of data in the 2013 HUD report on homelessness. This is part 1 of The Urbanist’s series to better understand this data. You can see Part 2 here.)

The Department of Housing and Urban Development (HUD) does a yearly analysis of homelessness in the US and released their research for 2013 in August. This report is largely based on a single night count of homelessness among participating Continuum of Care (CoC) organizations, local planning organizations that manage all aspects of homelessness from providing shelter to providing permanent housing. The federal government provides most of the funding for homeless services in the country and ties the use of that money to guidelines regarding those services. Among these guidelines are requirements regarding the structure and responsibilities of local organizations that want to be eligible for funds and these organizations are referred to as CoCs. In Seattle, there is a coordination of resources and organizations, referred to as the Seattle/King County CoC. (I will be publishing a series of posts about the data found in this report, focusing on the Seattle/King County CoC.)

To get a handle on the makeup and number of people experiencing homelessness, HUD attempts to collect accurate information on the entire homeless population without counting anyone twice. Data collection mostly depends on a ‘single night count.’ Organizations responsible for solving homelessness conduct a count of the population within their jurisdiction on a single night each year. The count usually takes place at the end of January, and the results from Seattle were widely published this year. This method isn’t perfect—it relies heavily on volunteers and possibly misses variations in homelessness during the year—but it is the best data available for understanding homelessness in the United States.

The scale and details of the homeless problem in the US can be very discouraging, but there are also reasons for hope. Some of the particularly stark findings from this year’s report include:

While Seattle saw an increase in homelessness between 2013 and 2014, the region was growing. Additionally, there is good news on the federal level regarding homelessness:

The federal government has four primary goals regarding homelessness:

Some of the notable data from 2013 in Washington State includes:

All the data for Seattle is a combination of Seattle and King County since there is a coordinated effort in this region. Some of the notable data in 2013 from the Seattle/King County CoC includes:

In future posts, I’ll expand further on the data for the Seattle/King County CoC since the national report does not discuss these numbers in detail.