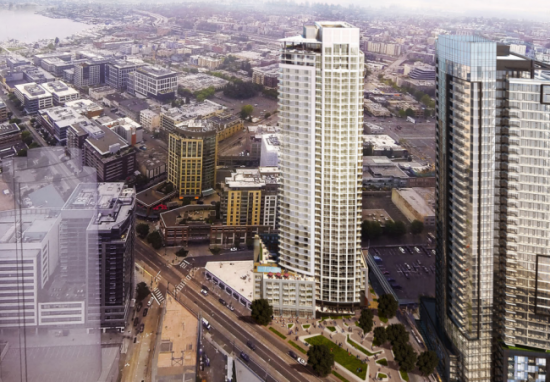 The NC3-85 and NC3-125 zoning designations (Neighborhood Commercial 3, 85-foot/125-foot height limits) are used extensively throughout Seattle. Ostensibly, the goal of NC3 zoning is to create large, pedestrian-oriented, mixed-use commercial districts. But in fact, these two designations are limiting Seattle’s ability to develop, while presenting the illusion that the city has more available building capacity than it really does.

To start, let’s compare the 4 different height limits used for NC3 zones. Suppose that there are four lots, each one 28,500 square feet and with a different NC3 zoning designation:

It’s important to remember that height is not density. Imagine a parcel of land that is divided into two halves: one half has a one-story single-family home while the other half is vacant. If the homeowner builds a second-story addition and rents it out, they have doubled the density of their property. But if the homeowner simply builds another one-story home on the vacant part of the lot, they have doubled the density as well. Ultimately, the floor-area ratio (FAR)–i.e. the total amount of floor space that a building can have, given the size of the land it sits on–is a much better measure of how dense a neighborhood can get.

A new development on a parcel zoned NC3-85 can have 26% more floor area than if the parcel were zoned NC3-65. Despite this, NC3-65 remains the leader in new, low-rise development in Seattle. The reason for this is simple: geology. According to the United States Geological Survey (USGS), Seattle is in seismic category D. This designation limits the allowed heights of buildings that use wood for structural purposes (a.k.a. “seismic force-resisting systems”). In particular, buildings that use wood for bearing walls or building frames cannot be taller than 65 feet. Here’s an excerpt from the ASCE 7 Standard (American Society of Civil Engineers): If this seems weird, think about the opposite: how many 6-story buildings have you seen being built out of concrete or steel? Wood-framed buildings are cheaper and easier to construct, and so developers generally don’t want to use sturdier materials until they have to.

Given this limitation, every real estate developer must ask themselves, “Are two extra floors (20 extra feet) worth the hassle of concrete and steel?” For most developers, the answer is “no“. Instead, they choose to buy and develop lots with NC3-65 zoning.

Only the 160-foot height limit (NC3-160) offers a meaningful improvement over NC3-65. Its FAR of 7.00 is over 50% greater than NC3-65’s max FAR of 4.75. And NC3-160 is nearly 2.5 times as tall as NC3-65, which allows for 7 floors worth of premium-priced high-rise units. Those premium rentals are key in helping the building “pencil out,” even with the added expense of concrete or steel construction.

As an aside, it’s worth noting that NC3-160 encourages good urban form in a way that NC3-85 does not. A 6-story building on an NC3-85 parcel can cover 100% of the lot. Too many of these “bread loaf” buildings can create an imposing facade. With NC3-160, if a developer were allowed to go “straight up”, over half of the lot would be undeveloped. In reality, developers follow the pattern used by buildings like Olive 8, with 2-4 stories of full-lot coverage and a skinnier tower on top. This urban form can feel more airy and inviting than full-coverage 6-story buildings, even though it’s actually denser than the latter.

While they have good intentions, the NC3-85 and NC3-125 zoning designations simply don’t live up to their potential. Construction costs and FAR limitations will prevent these zones from achieving the high density and good urban form that NC3 is designed for. If we’re lucky, the market will price these parcels at the same rate as NC3-65, and these lots will be redeveloped with needlessly short buildings. If we’re not lucky, then a lot of existing buildings, parking lots and “brown fields” will miss out on the redevelopment that they deserve.