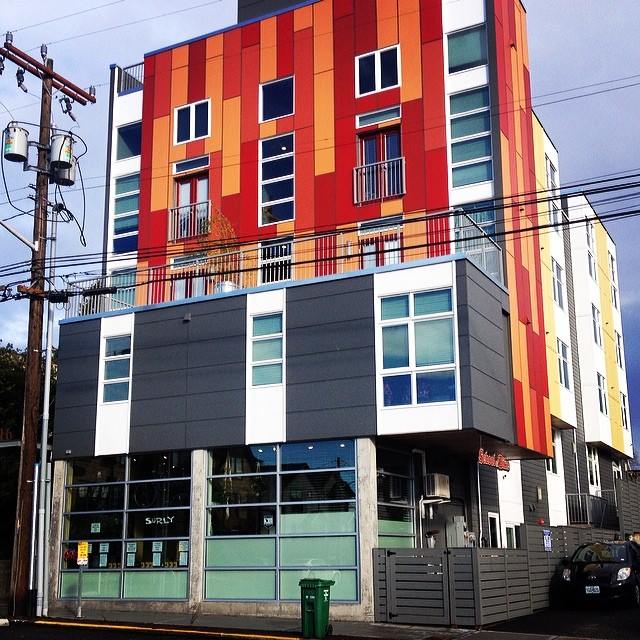 Image: Microhousing in Wallingford by Footprint.

The long hard road to a new set of rules for microhousing may finally be coming to a conclusion. The Planning, Land Use, and Sustainability Committee meets this afternoon and is expected to vote on a final set of changes (see the legislative brief and code language) to microhousing legislation before sending the bill to the full council. Capitol Hill Seattle has the details in an article today and says that:

The new rules pounded out after over years of debate will continue to allow microhousing development in dense areas like Capitol Hill while setting a new average size requirement for the apartments built in lowrise-zoned areas. Under the compromises forged by [Council Member] O’Brien, Seattle will end up with two types of microhousing. In areas zoned lowrise where you’re more likely to find single family homes or small apartments, microhousing units must average 220 square feet–though Tuesday’s amendments may adjust size thresholds.

Over the past two years, the process for developing reasonable microhousing regulations has been hijacked by anti-development single-family residential groups. The groups have consistently used the typical concern trolling tactics of raising non-issues and emotionally inflammatory arguments. What started out as simple opposition to perceived parking, building height, and density issues morphed over time by condemning developers, residents, and city staff.

The anti-development crowd in its zeal doubled-down to define what was a humane amount of livable space, how many people could use a kitchen, and what constitutes a unit. When that wasn’t enough, they proceeded to make specious claims that developers wouldn’t provide proper waste collection facilities and that every sleeping room needs a sink (or the world might just collapse in on itself).

When I first learned about the Department of Planning and Development’s effort to create a regulatory framework for microhousing, I had hopes for superior development policies like increased bicycle parking ratios, a review process for building design, restriction of vehicle parking to residents, and establishment of enhanced site development layout requirements. Indeed, some of these broad elements have been incorporated in the final legislation.

However, the concern trolling of neighborhood groups and endless council consternation largely won out in the end. It’s unfortunate that the microhousing legislation will come out as a mixed bag of rules that no one will be happy with. But to add insult to injury, the process reached far beyond the common interest of the public and instead into the bedrooms of future residents, the real victims in this battle for choice and affordability.

CHS hits the mark saying that:

Critics and some developers are not thrilled about the pushback. Capitol Hill microhousing developer Scott Shapiro–who also helped create the Melrose Market–recently told the council there is “no good policy reason to limit size” and called the regulation a “a de facto downzone” amid “a housing crisis” in Seattle. “Design review is broken,” he said and needs to be fixed before it is “imposed” on microhousing. Shapiro offered no opinion on the sinks.

Council Member Mike O’Brien perhaps summarizes all of this the best: “People living in smaller units is a choice. What we really care about is how big the building is on the outside.” It’s too bad we aren’t likely to give people a choice.