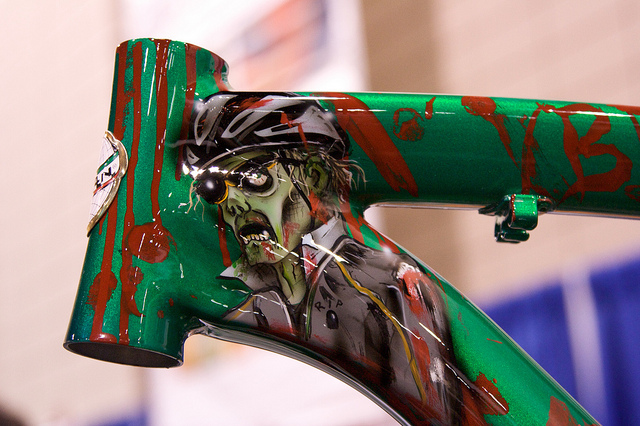 If you haven’t had the chance you should read this great article explaining why smart people say dumb things when talking about bikes. It is an interesting analysis, trying to pin down the reasons people people react so negatively to cyclists but it doesn’t address the range of recurring comments. Most of these comments have been thoroughly debunked and appear dead but seem to come back to life every now and then. These are zombie arguments.

This article is meant to be a resource for killing those zombies arguments. This claim often rises from the dead when there’s a street design change to accommodate cyclists.

Building bicycle infrastructure isn’t special treatment. All modes have unique infrastructure, including cycling. The amount of infrastructure for cyclists pales in comparison to other modes. This estimate puts the number of  separated, green lanes for cyclists at about 288 miles nationwide. Compare this to the 3,952 lane miles in Seattle that were designed and built to prioritize the safety of motorists. The only treatment that cycling receives which is different is vastly less infrastructure.

But all of that is beside the point. There are many paths, side streets and greenways not built for cyclists but that can be used comfortably. More importantly, suggesting that modes are in competition misunderstands the nature of streets, to allow everyone to travel where they are going efficiently and safely. Street design should allow modes to complement each other and this is the case with bike infrastructure. Bike lanes reduce collisions which isn’t just good for bikers, it’s good for drivers, who may be found culpable in accidents, and pedestrians, who are less likely to be hit. In addition to safety, bike infrastructure encourages more cycling, reducing congestion by reducing the number of cars on the road. In fact, the best evidence shows that bike lanes don’t increase travel times but do improve safety.

2. Changes to accommodate bikes are being driven by powerful, shady interests.

Of course, like nearly every other political group in the city, cyclists have tried to exert political power through organizing. Nearly all of this success springs from the fact that most people support safer bicycle infrastructure. Polling indicates nearly 78% of Seattlite voters have favorable feelings towards cyclists and 45% ride their bikes at least a few times a month. If someone is looking for the special interest group supporting cyclists in the city, the best place to start might be their neighbor.

This argument ambles back from the dead to eat lanes built for bikes.

Most people don’t realize where the money comes from that builds our roads and other transportation infrastructure, assuming gas taxes and car tabs pay for all of it. This is false. Car tabs and gas taxes only begin to cover a small percentage of costs related to car infrastructure. A lot of the money comes from general funds, unsustainable debt or is passed on to others as externalities. In Washington, only about 33% of total road spending is paid for with gas taxes and user fees. For example, in 2009 gas tax revenue only accounted for 4% of SDOT’s budget. There are a lot more resources illustrating this basic point.

This line of thinking again misunderstands how our transportation network actually functions. All forms of transportation are subsidized and most people use multiple modes. This of course means that a lot of cyclists drive cars and pay their car-tabs as well as gas taxes. Regardless, roads are public. Even if someone paid no taxes at all, they would still have a right to use the road and society would have a moral duty to ensure the road is safe.

This zombie argument stumbles after memories of perceived slights.

As can be seen in the comment above, many complaints about cyclists breaking the law are instances in which the cyclists is behaving legally, like riding on the sidewalk. But do cyclists break the law more than the general population?

Of course not. Unsurprisingly, the data indicates that 94% of cyclists wait at read lights. It should also seem obvious that drivers break the law all the time. This research indicates that 79% of people think it is safe to speed.

The truth is cyclists don’t have some character flaw that makes them more disrespectful of the law. Like motorists who speed or pedestrians who jay-walk, they also occasionally break the law. Most importantly, because some individuals break the law doesn’t mean that all cyclists are less deserving of safety while using the road.

This zombie argument tries to force defensiveness. I usually takes the form of here’s an example of “someone killed by a cyclist.”

We shouldn’t minimize deaths caused by cyclists or suggest that cars are evil but we should focus on real dangers. A study over a four year period in the UK showed 98% of fatalities in urban areas were cause by vehicles. There were only 9 pedestrian fatalities from bicycles compared to 1,361 from cars.  If we are actually worried about safety, it makes sense to focus on what actually makes our roads unsafe. Cycling is responsible for a tiny amount of injuries in comparison to driving. Over a five year span in New York, there were 3 pedestrian deaths caused by cyclists, compared to 766 by motor vehicles. Driving a car requires a magnitude of responsibility greater than riding a bicycle. This is why there are age limits to get a driver’s license but most people learn to ride a bike as a child.  Time spent ticketing cyclists for not wearing helmets is time taken away from enforcing speed limits or other laws that are meant to prevent the 30,000+ deaths and 3+ million  injuries every year connected to motor vehicles. The fact that there are examples of deaths cause by cyclists is not a good argument against bike infrastructure or to increase enforcement of bike laws.