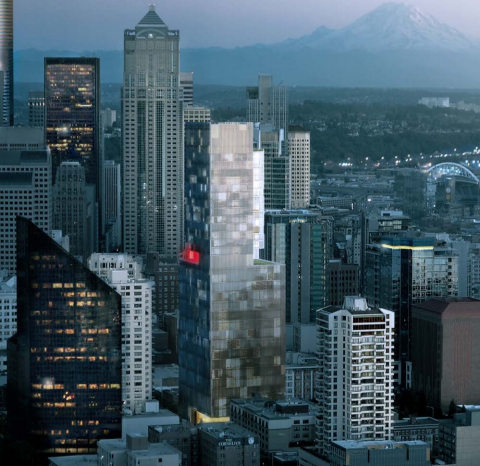 Another skyscraper could soon join the Seattle skyline, this time in Belltown. 3rd and Lenora Tower–as it is known–is the brainchild (permit number 3018686) of long-time Seattle developer Martin Selig and designed by Perkins+Will. The tower would soar to the heights of 440 feet, or about 31 stories. The building would provide a mix of uses that includes retail, office, and residential space. This proposal comes on the heels of at least five other Seattle-based projects by Selig in the past year. Most recently, Selig entered the Ballard development market with two new projects, one office and the other residential.

The site is zoned as DMC 240/400 with the Belltown Urban Center Village designation, which allows high-rise construction of this type. Selig’s project would provide up to 560,000 square feet of space for 150 residential units, 270,000 square feet of office space, and 250 parking stalls. While the building itself is 31 stories, another six floors below grade would be provided for the parking.

As is customary with design review, three different designs have been analyzed by the project proponent for alternative massings: a box scheme, a bar scheme, and a z scheme (the preferred alternative). Each alternative would feature a retail/lobby floor, office in the lower half of the structure, and residential units in the upper half.

One massing explored was the box scheme, similar to the Aspira Tower. This is a boot-shaped tower form whereby the core of the building extends to fill the full site of the parcel in a rectangular fashion. Rising upward, the core continues unobstructed until a middle height until the building form changes. The building under this scheme would stepback along the longest horizontal plane of the building. The structure would then continue upward as a square core for the remaining half. Because of the mid-building stepback, a plaza space would be fill the open roof area.

Another massing explored was the bar scheme, similar to the Russell Investments Center. This is a another rectangular variation on a tower. However, the difference between this and the box scheme is the upper half of the tower. Instead of stepping back at mid-building to create an upper box-shaped core, the core remains rectangular. At mid-building, the stepback would occur toward the alleyway of the building, leaving an imposing unobstructed facade along Third Avenue. As in the box scheme, a mid-building plaza space would be provided.

The preferred massing chosen by the project proponent was the z scheme. This alternative is a unique approach for the tower because the facade is repeatedly broken in the upper half of the structure. Indeed, the lower half of the structure is an unobstructed rectangular core, but the upper form would modulate in partially broken rectangular forms along the facades of Third Avenue and Lenora. The benefit of this, of course, are the many distinctive views for residents that become possible by this design. Again, a mid-building plaza would be featured, but on two sides of the structure as opposed to one continuous, unobstructed space.

On a somewhat related note, another skyscraper project, called 600 Wall Street, is moving into its final design review phase for Board recommendation (permit number 3015251). 600 Wall Street is a 43-story residential tower situated at the confluence of Denny Way, Wall Street, and Sixth Avenue. The building will reach heights of 396 feet and consist of 39 residential floors, one floor each of retail and leasing space, two floors of amenities, and six floors of underground parking. The breakdown of this translates to 400 residential units, 1,941 square feet of retail, and an astonishing 315 parking stalls.

The convergence of these three streets presents a very unique circumstance in a triangle island lot is created. Because of this, the project proponent has responded by captializing on the triangular urban structure to replicate the shape in the tower’s design. To take some of the edge off of the triangle, the architects have rounded the northwest corner to give a soft terminus point from the street while opening up additional view points along the building’s curvature.

While not obvious from the image above, the changes from the previous design are quite significant. The building’s northwest corner was much more enhanced by a blunted curve toward the interior of the site. Meanwhile, the building’s finishes on the ground floor and “podium” levels had brash, orangish box canopies and functional space that projected from the building facade. These have since been removed. Instead, the architects have deployed a design that is less complex and eye-catching. The revised facade features white whiskered finishes at the base, and simple screening, glass balcony projections, and white rectangular frames for effect.

Parking doesn’t usually rise to a particularly noteworthy feature for a building, however, 600 Wall Street’s parking facility does. In the schematic above, you should note the one-way system for vehicle circulation. Cars enter from Sixth Avenue to a parking hall assembly area on the ground floor, and exit onto Wall Street. One would usually expect some sort of ramp system to take vehicles under ground or above ground. However, that is not so in this case. Instead, the developer has chosen to employ a lift system for the parking garage. Vehicles ascend and descend three different lifts. Previously, an even more elaborate system of lifts was proposed, including two turntable lifts. But these were dropped from the revised proposal. This kind of parking system in a tower is a first for Seattle, if not for the rest of the West Coast, too. It’ll be interesting to see it action regardless of one’s feelings on more Downtown parking facilities. it certainly is for Seattle.

How to Get Involved

If you’re interested in attending the community design review meetings for either project, you can do so tonight. The Downtown Design Review Board will convene the meetings at City Hall in Room L280, located at 600 Fifth Avenue. The 3rd and Lenora Tower meeting begins at 5.30pm while the 600 Wall Street meeting will begin at 7pm. Alternatively, if you wish submit comments in written form, you can do so by e-mailing DPD at PRC@seattle.gov.