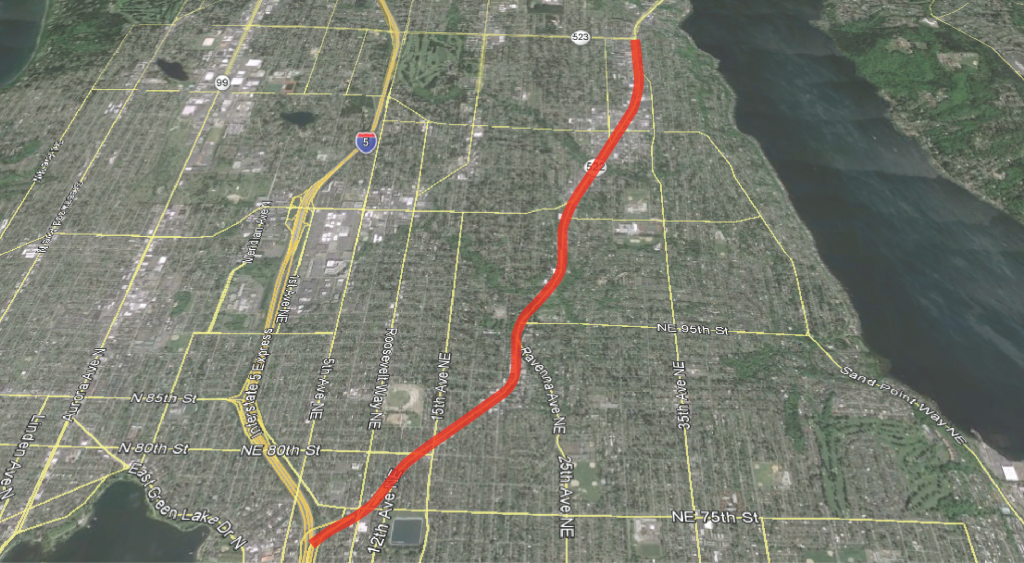 Lake City Way is an arterial street in northeast Seattle that has been chronically unsafe for all users. It’s also a State highway, so features beyond sidewalks and beg buttons for people walking are mostly an afterthought. The numbers show it: a multi-agency effort that began in 2007 collected specific data on collisions for five years on the street’s 3.6 mile stretch, recording astounding rates of 143 collisions and 88 injuries per year. The City of Seattle, the Washington Transportation Safety Commission (WTSC), community groups, and others are working to improve the situation.

The WTSC acts as the State’s highway safety office and is working towards a goal of zero traffic fatalities by 2030 through a combination of engineering, education, and enforcement. They selected Lake City Way for funding improvements because of its particularly poor safety record. The five-lane route has a speed limit of 30 to 35 miles per hour that is often broken, many turning vehicles, and poor crossing options for pedestrians. Previous WTSC projects in Seattle were on Aurora Avenue (SR-99) and Rainier Avenue (not a state route). The results of those two projects were noticeable, but significantly more work remains to be done.

Even so, Janine Blaeloch with Lake City Greenways told me that residents along the corridor are grateful for the ongoing efforts. She and the group have been involved from the beginning and are providing feedback that helps prioritize which intersections should be fixed. The corridor is home to large numbers of vulnerable elderly and disabled people, who are most at risk and in need of safety features. The actual design of new curb ramps, sidewalks, median islands, and traffic signal phasing takes a while, so in the meantime Blaeloch and others have been working on education. One effort has been regular “crosswalk actions”, during which a group of residents will cross the street with signs for drivers: “streets are for everyone”, “let me cross safely”. To target younger drivers, Lake City-based Elliot Bay Brewing agreed to print information on their drink coasters.

The Seattle police and Washington State Patrol have also stepped up enforcement of traffic safety laws, and some simpler additions have already gone in. At the intersection with NE 125th Street, the city’s transportation department (SDOT) has installed temporary cameras to monitor how cars and people interact during the current traffic signal phases. People are frequently blocked by turning vehicles, as in the photo above. Blaeloch says the formal monitoring is the result of Lake City Greenways conducting their own impromptu study one afternoon and observing.

Last year, flashing beacons were installed at the mid-block crossings north and south of the intersection with NE 125th Street, the heart of the Lake City neighborhood. Radar speed signs were also installed around NE 95th Street, where collisions are frequent. The project is not adding any bicycle infrastructure, which is fine by Blaeloch. “I ride my bicycle everywhere, but I will not ride on Lake City Way”, she says. In addition to being a freight corridor, the route carries an average of 40,000 vehicles per day, which is higher than SDOT will consider for a road diet that might include protected bike lanes.

This year, larger projects will be undertaken by SDOT. One of the first will channelize the intersection at 24th Ave NE, which comes in at an angle like a freeway on-ramp. Blaeloch says this area is particularly dangerous for the many people who use a nearby bus stop. The changes will include new sidewalks, a bulbout to make the intersection a right angle, and signalized crosswalks. At NE 110th Street, where high school students catch buses, SDOT will install curb bulbs and median islands.

Jim Curtin, lead SDOT staffer on the project, says in a blog post that additional changes are coming for intersections at NE 125th, 130th, 135th, and 145th Streets, along with 15th and 20th NE Avenues. With transportation dollars so scare, piecemeal projects like this serve as an example of how small improvements can make a world of difference for those who choose to walk.

Scott Bonjukian is a graduate student at the University of Washington’s Department of Urban Design and Planning. He writes on Seattle planning and design topics at this personal blog, The Northwest Urbanist.