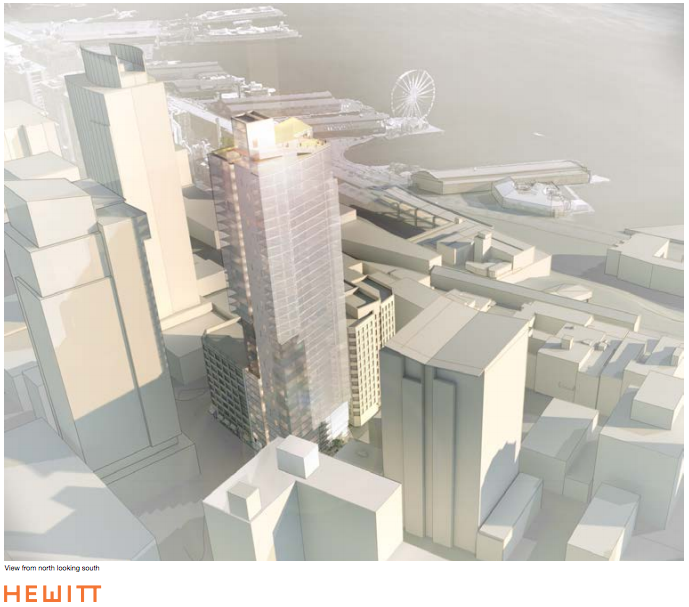 A half block of Second Avenue could soon be home to a new mixed-use high-rise skyscraper called 121 Stewart.  This new tower proposal is nestled on the southwest corner of Second Avenue and Stewart Street, two short blocks from the heart of Pike Place Market. The current site has a two-story commercial structure called the MJA Building, which pours out to the street in modest style: multiple spaces are partitioned on the ground floor with a prominent corner entry; a classic transom rounds the first floor windows to frame the structure; and a plain parapet tops off the building roofline, typical of 1910s masonry construction. Adjacent to this building towers a mixed-use neighbor, the Broadacres Building, which is planned to remain.

The surrounding vicinity is already busy with development. On the other side of Second Avenue, another tower will be constructed under the project name 2nd and Pine. Site excavation is well underway on the project with building construction soon to follow. The site previously served as a surface parking lot, but those days are mostly gone. Meanwhile, a project kitty-corner to 121 Stewart just started site excavation on the northeast corner of First Avenue and Stewart Street, named 1900 1st Avenue. This building will be of a smaller scale; the residential block will rise 11 stories. Like 2nd and Pine, it was previously a surface parking lot.

121 Stewart will rise to 400 feet–or 39 stories–which is the maximum height for the DMC 240/290-400 zone. While the structure is intended to be mixed-use, there is a strong emphasis on residential space. Approximately 230 residential units are planned to be built within the tower. Retail space will occupy a mere 1,000 square feet on the ground floor. But, a whopping 140 parkings stalls will be located below and above ground. Despite the fact that the building will be market rate, the applicant plans to provide affordable housing through fee in-lieu payments to the City.

The applicant hopes to capitalize on the unique features of the site. Because of the changing nature of the Seattle grid here, the streets run into each at angles to create a trapezoid-like shape for the block. At the same time, the property is located at a high point in this area of Downtown, with the slope quickly descending along Stewart Street to the waterfront. This all combines to create an opportunity for an iconic building, and that’s just what Hewitt Architects hope to achieve in their tower design for the applicant.

Here’s how they describe the site context and preferred tower option:

Stewart Street is pedestrian-scaled and has a strong visual relationship to the Market and Elliot Bay beyond. Second Avenue is a broad, north to south, heavily-used city connector for vehicles, bicycles, and King County Metro and Sound Transit bus services. Each street is highly active but unique in character. The design responds with an entry on Stewart that is pedestrian-scaled and highlights the water/market connection, while the Second Avenue frontage offers a tall, transparent public face to the tower. A visible elevator lobby entry and double height space anchors the corner. The facade and street edge intends to facilitate the heavily used transit stop.

The upper level massing of the structure uses the shifted geometries of the street grid to reduce scale and gesture to the surrounding environment. Massing is stepped back to respect the Broadacres Building. The elevator core at the edge of the building mass is flanked by residential units and wraps around the above-grade parking, reducing undesirable inactive portions of the facades. The roof, a common recreation program, and elevator penthouse provide a unique and signature merging of the structure and skyline. This allows occupants to connect with dramatic urban and natural vistas.

Materials for the proposed tower are a clever mixture of steel, glass, and stone cladding. The core of the building is intended to feature a stone material that is paneled from top to bottom. Occasionally, this paneling includes recessed and projected stone to keep the linear column of the core interesting. Meanwhile, the tower will be laced together with steel and translucent glass. The superstructure and individual units should be clearly seen from the street level.

Modulation of the facade and structure further helps to keep the tower visually interesting. The architects are playing with an option to open up the southeast corner of the building through the creation of a gap mid-structure. Floors above the gap would overhang not only the gap, but a portion of the Broadacres Building. The gap will open additional views that otherwise would not be possible with a linear tower column wall. Other modulations will be provided throughout the building facades to keep the structure flowing and striking. Ultimately, it seems like the architects will achieve a very iconic building design for this location.

The first argument is on very shaky ground. Generally, leasing area–which is effectively office space–is not considered an active use, especially on the ground floor of such a high trafficked area. The applicant is hoping that the City will categorize this as “general sales and services” under the Land Use Code. If the City doesn’t, it puts the project as proposed in serious doubt for approval because it’s predicated on the second point. The structure on its own, even if the leasing area were counted as “general sales and services” couldn’t meet the code requirement.

The applicant is further hoping that the three frontages of the Broadacres Building and 121 Stewart will be considered together through averaging of the street level active use calculations. By doing so, the applicant would be able to exceed the 75% minimum of active street level frontages if the leasing area is deemed a “general sales and services” use. In such a scenario, 87% of the frontages would be categorized as an active use with the remainder providing internal services like residential entry space and elevator shafts.

The crux of the problem of why the applicant even has to request a departure is that so much space has been given over to parking. Three or four floors above the ground floor could be just parking space. Instead of placing the office-oriented leasing area above ground, the applicant has forced themselves into providing it on the ground floor. The parking further exacerbates opportunities for active street level uses because ground floor space must still be provided just to service building residents through elevators, stairs, lobby, and building maintenance uses.

If you’re interested in attending the community design review meeting for this project (or the other Downtown project), you can do so tonight. The Downtown Design Review Board will convene their meeting at City Hall in Room L280, located at 600 Fifth Avenue. The 2200 7th Ave meeting begins at 5.30pm while the 121 Stewart (aka 1613 2nd Ave) meeting will begin at 7pm. Alternatively, if you wish submit comments in written form, you can do so by e-mailing DPD at PRC@seattle.gov.