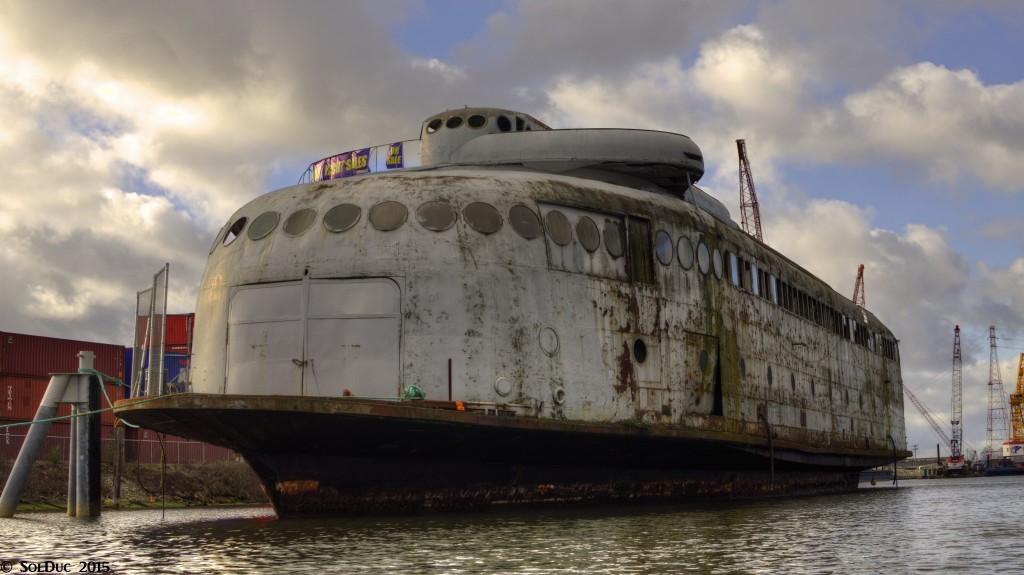 That’s it. Today, the Kalakala is going to the breakers. The 276-foot ferry’s last trip is scheduled for early morning today, from the Hylebos Waterway to the neighboring Blair Waterway in the Port of Tacoma. After that, it will be scrapped in the drydock that was used to build some of the pontoons for the SR-520 floating bridge.

Built in 1926 in Oakland as the Peralta, the ferry was used in the Bay Area until the night of May 6, 1933 when it caught fire. The superstructure all gone, but the hull still intact, Capt. Alexander Peabody of the Black Ball line bought the hull and towed it all the way to the Puget Sound. In was in Houghton (part of present-day Kirkland) that the iconic streamlined superstructure of the Kalakala (Chinook Jargon for “Flying Bird”) was built on top of the Peralta’s hull. Entering service on July 3, 1935, the “silver slug” was an immediate hit on the Seattle-Bremerton route, where the ferry spent most of its career.

From 1935 until its retirement, the Kalakala was the icon of Seattle. Before the days of the Space Needle, the classic Seattle postcard featured the Kalakala. The ferry was rated the #2 attraction after the Space Needle during the 1962 World’s Fair. However, in the 60s the ferry proved more and more difficult to operate efficiently. She couldn’t carry the bigger cars, and her engine and superstructure were showing signs of wear. Even with improvements done, the ferry still vibrated a lot. The ferry last ran in revenue service on August 7, 1967, replaced by the Super Class (Hyak, Kaleetan, Yakima, and Elwha, still in service today).

After that, the ferry was sold to an Alaskan cannery and moved to Kodiak, AK, where it operated first as a floating processing vessel before being beached. Found by a Seattle native in 1986 after being abandoned, it took several years of efforts to partially restore the vessel and tow it back to Puget Sound. Since coming back to Washington at the turn of the century, the Kalakala has spent time on the Seattle waterfront, Lake Union, and Neah Bay before settling on the Hylebos Waterway in Tacoma. Deteriorating quickly, the owner of the Kalakala, Karl Anderson, announced his plans to scrap the ferry earlier this year.

I paid a last visit to the Kalakala on January 19th when she was still in one piece. Here are some photos I took from my kayak.

Editor’s Note: All of the pictures in this article were taken by Guy de Gouville on January 19, 2015 on the Hylebos waterway in the Port of Tacoma. © 2015 Guy de Gouville/SolDuc Photography. All rights reserved. Do not copy, print or distribute without permission from the photographer.

More detailed information about the Kalakala can be found on Evergreen Fleet, a website dedicated to the Pacific Northwest’s ferries, run by author Steve Pickens.