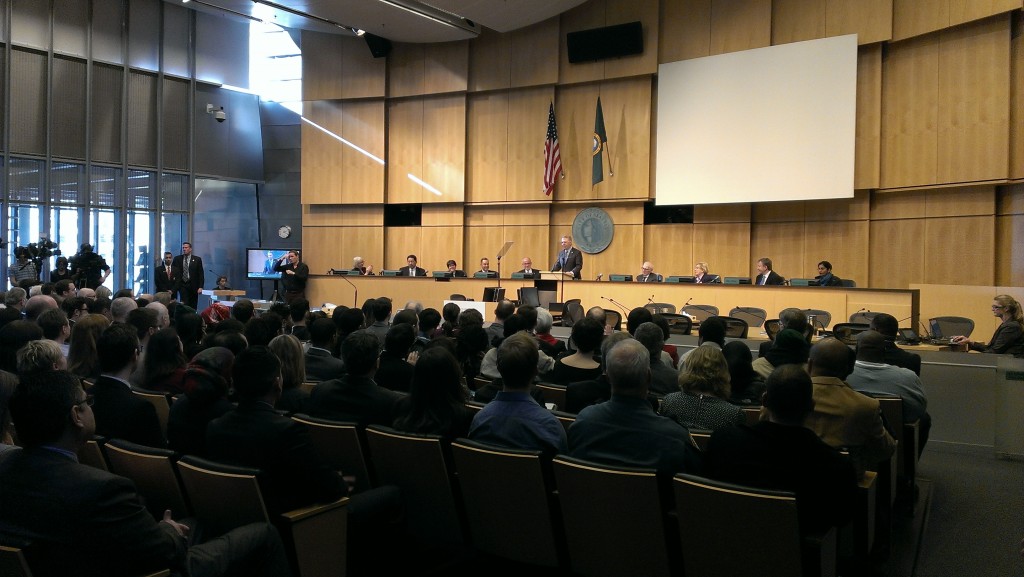 In his annual address, Seattle Mayor Ed Murray remarked on the city’s significant progress towards some of its goals and made a number of announcements about initiatives to pick up the pace on others. He also spoke at length about city planning, including the ongoing comprehensive plan update, the need for an integrated transportation policy, and funding infrastructure and ensuring affordable housing is more equitably spread across neighborhoods. He plans to host a number of summits on social and economic issues with community leaders while increasing government transparency through new performance and budget tracking tools.

Noting that the state of the city is strong, Murray pointed to the city’s many social achievements that were implemented over the past year or will begin this year. The city’s minimum wage ordinance will take effect in April, starting at a citywide standard of $11 per hour. Permanent funding for parks maintenance will also begin in April thanks to the voter-approved Seattle Parks District. In June, Seattle will get the biggest increase in bus service in King County Metro’s history. In July the city will implement a new priority hire program to increase contracting opportunities for local and disadvantaged workers on  public construction projects. And, in September the city will start up its new preschool program to improve long-term academic performance.

Highlighting the number of young people in the audience, the mayor noted that half of Seattle residents are younger than 35 years old, and this large group has a major say in the future of the city. He highlighted Seattle’s rapid growth that is outpacing the suburbs for the first time in 100 years, and applauded the fact that three-quarters of that growth has been happening in designated urban villages. However, services and infrastructure have not kept up with these changes even as 120,000 new residents are being planned for by 2035. Ballard, for instance, has grown 25 percent in the last decade alone with concurrent increases in transit service. Rainier Beach has three times the unemployment rate of the city as a whole. The Seattle 2035 comprehensive plan update, he said, is an opportunity to explore the long-term response to such issues.

Murray announced that he will set new policies for social equity in city planning, saying, “Growth must be about placing without displacing”. He used the example of a Downtown worker who can only afford to live in South King County, commuting hours each day, and declared that everyone who works in Seattle should be able to live in Seattle. Seattle’s rents having been growing faster than any other major US city, so last year the mayor convened a Housing Affordability and Livability Committee. On Tuesday, he announced that he will commit $35 million to implement the committee’s recommendations, due later this year. Murray emphasized that affordability will not be solved with a single tool, possibly in reference to the controversial linkage fee program. But he did point out that, along with the private sector, non-profits, and a concerned public, the city government has a large role in solving housing problems.

Transportation was also briefly touched on. Murray touted the outcome of his rideshare services committee that ultimately brokered a deal between taxi companies and new app-based services like Lyft and Uber. He also mentioned continued expansions of protected bike lanes, the launch of Pronto! bike share, an increase in the cap of free floating car share permits, and the upcoming opening of two new light stations as examples of the city’s growing multi-modal network. He urged a quick passage of state legislation that will enable Sound Transit to ask voters for funding to expand and connect West Seattle and Ballard with light rail to Downtown. Murray announced that a holistic strategy for integrating the city’s transportation systems, under the name “Move Seattle”, will be unveiled by next week.

The mayor also announced two new city websites that will increase government transparency and availability of data. Performance Seattle is a new civic metrics system that will track key statistics like crime, carbon footprints, affordable housing units, and more. Open Budget is an unprecedentedly detailed and interactive way for citizens to view the city’s $6 billion annual budget. It is organized by the city’s operating and capital budgets, and divisible by department and specific projects. The city is increasingly opening up its data to the public, including for hackathon events.

More so than last year, Murray spoke extensively about police reforms. He said it remains a top priority for his administration. The Seattle Police Department will be directed to increase the diversity of its force, collect better data, increase deescalation training, have more civilian oversight, and implement other changes as ordered by the federal Department of Justice. Though he avoided discussing specific incidents of use of force, the mayor also pointed to “smart policing” tactics that been developed to target upticks in crimes like car thefts in South Seattle and robberies in Capitol Hill.

Moving forward, Murray intends to help close social and economic gaps by increasing opportunities across racial divides and neighborhood boundaries. A grant from Bloomberg Philanthropies will help the city create 2,000 summer jobs for youth, and this spring, Murray will hold a youth summit. There will also be an education summit in the fall to pave the way towards 21st century urban school system, though there was no mention of the recent failure to secure a Downtown school. Last year an economic summit with industrial and maritime businesses led to beefing up key truck routes, but Murray cautioned the city cannot continue to rely on luck and geography for economic development. He hopes to continue working with businesses interests on creating an attractive economic environment. In addition, a new labor office is starting up to help businesses cooperate with the minimum wage law. And, finally, later this spring there will be another neighborhood summit that invites residents to a citywide conversation.

Seattle is an increasingly attractive city to people and business alike, and with continued leadership on these many issues it will surely become more so. Initiatives on social equity, environmental stewardship, and economic vitality are needed to continue striving for a high quality of life and vibrancy of diverse neighborhoods and communities.