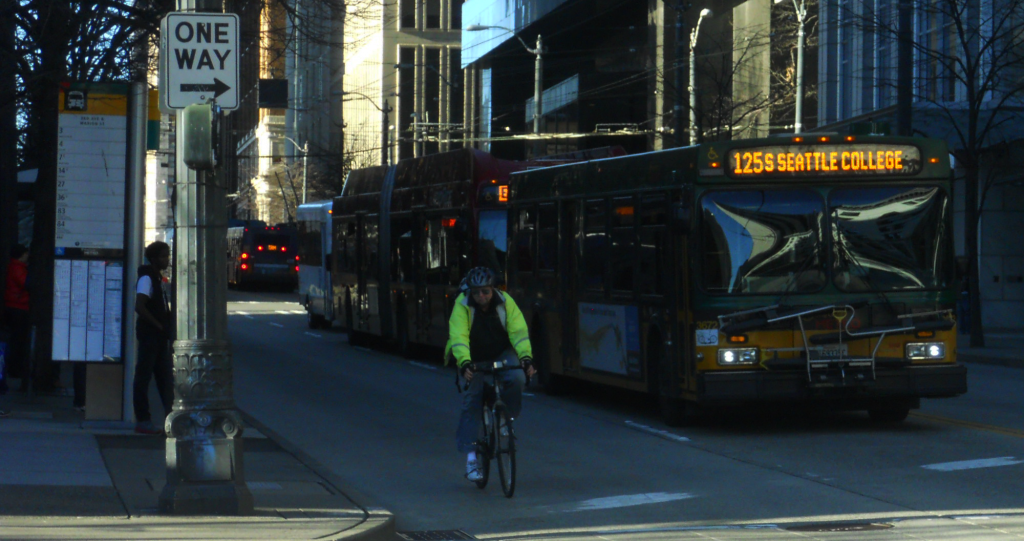 UPDATE:  Metro released formal alternatives on Thursday. The new information and maps have been updated throughout this post.

This week King County Metro and Sound Transit will jointly release two alternatives for bus service restructures to happen in 2016. The effort is intended to better connect riders with two new Link light rail stations opening one year from now, nine months ahead of schedule, in Capitol Hill and the University District. I’m a member of the citizen ‘sounding board’ on the project but the opinions here are my own.

The network in ‘Alternative 1’ is an aggressive strategy of consolidation, with elimination of duplicate routes in exchange for increased frequency throughout the day. It attempts to quickly connect people with the new light rail stations, which will cut down on travel time overall. The ‘Alternative 2’ network has few changes and is similar to the current bus system, but still has some key changes worth noting.

The two alternatives encompass central and northeast Seattle and represent an equal number of annual service hours. Service hours are Metro’s currency (equal to about $150 per hour) and represent the time a bus is operating. While Seattle voters have approved buying extra service hours from Metro starting in June, this restructure process is only based off the current network. After getting public feedback this month, the agencies will come back to the sounding board to craft a final proposal for the King County Council by July.

Typically, increased frequency would bring buses by stops every 10 or 15 minutes, up from every 30 or 60 minutes. ‘Peak hours’ refers to commuting times of 5-9am and 3-7pm, with peak-only routes being those that only operate during those hours. ‘Midday’ is in-between and ‘night’ is after 7pm.

The following are route deletions under Alternative 1, and in parentheses are the frequency adjustments to the routes riders would use instead.

Other than those listed in parentheses above, the following routes would also see increased, decreased, or rerouted service:

And along with scheduling changes, a number of routes would be realigned. This includes some Metro and Sound Transit routes on the Eastside; see this map for Eastside routes. The most significant route changes in Seattle are listed below with commentary on those routes I am most familiar with:

Alternative 2 would have much fewer changes and is focused more on geographic distribution, with less frequent service and greater transfer times. Some changes are made to serve destinations based on public feedback last year. General service and realignment changes are listed below.

Alternative 1 is a great start to a higher frequency network for the people of north and central Seattle. It will require some riders to walk further to their stops, which many will probably consider worthwhile if the bus schedule is more robust. But in places with steep hills, poor or non-existent sidewalks, and other safety issues, the city should improve walking facilities. The consolidation of routes and stops could also allow unused stop shelters to be reallocated. Keep in mind that the opening of three more light rail stations only six years from now will necessitate another major network restructuring.

There are also maps available of travel times between various destinations under each alternative, factoring in the Link service. Under Alternative 1, travel times from the northeast neighborhoods to Capitol Hill will significantly improve. It’s a mixed bag in terms of travel time from those neighborhoods to downtown and South Lake Union, while there will no time advantage in getting to the University District from the north. Under Alternative 2, it’s also a mix of travel time advantages from points north to the south, with some places experiencing much slower travel times. These are very general observations, check the travel time maps on Metro’s website for details.

I have a particular concern with routes in the core of the U-District. Because 15th Avenue has double the lanes, wider sidewalks, and no on-street parking, I believe it should continue to carry the bulk of north-south bus routes in this area. There is potential to establish bus-only lanes. It also quickly connects students, the majority of riders in the area, with the university campus. Metro funded a makeover of The Ave’s streetscape a decade ago, and so are understandably reluctant to abandon it. But what’s best for the growing community here is to retain The Ave’s special and eclectic retail character. Converting it into a pedestrian mall, is a possible game changer. Getting buses off now, or at least reducing their number, would help build momentum for such an endeavor. But a transit-pedestrian mall may also be worth studying, especially if the streetcar comes back to town.

In response to this specific issue, Metro staff provided the sounding board with travel time data comparing 15th Avenue and The Ave between Ravenna Boulevard and 41st Street. The Ave wins out by a minute most of the time and up to two minutes during peak. But this isn’t a fair comparison. The Ave has one less traffic light (41st Street) and one less bus stop (52nd Street), making it naturally faster despite parking cars, mid-block crosswalks, and bicyclists slogging uphill. Plus, the minute or two speed advantage doesn’t matter for the vast majority of riders, who are heading to or from campus, if Metro makes them walk an extra block and wait to cross 15th at a light. Metro should, in short, prioritize 15th for bus service.

Early on I was also concerned with bus-to-rail transfers through the Montlake Triangle area, which was designed for high speed car traffic. Fortunately, Metro, the city, and the UW are taking a hard look here. Bus stops on Pacific Street will be moved closer to the south intersection, beg buttons will be removed, and stops may be consolidated on Stevens Way. Bicyclists won’t have an issue making a quick connection to the new Rainier Vista or Burke Gilman trail, but pedestrians will still have to walk several hundred feet. Wayfinding, shelter, and lighting investments could improve the experience if the agencies commit to funding them.

That’s my take. Check out the maps and Metro’s website, which has much more information, and let me know what you think and which changes would better serve the citizens of Seattle. Look out for Metro’s announcement this week of the public process, which will include online components and community meetings, and for the analyses of other local blogs who can dig into deeper details.