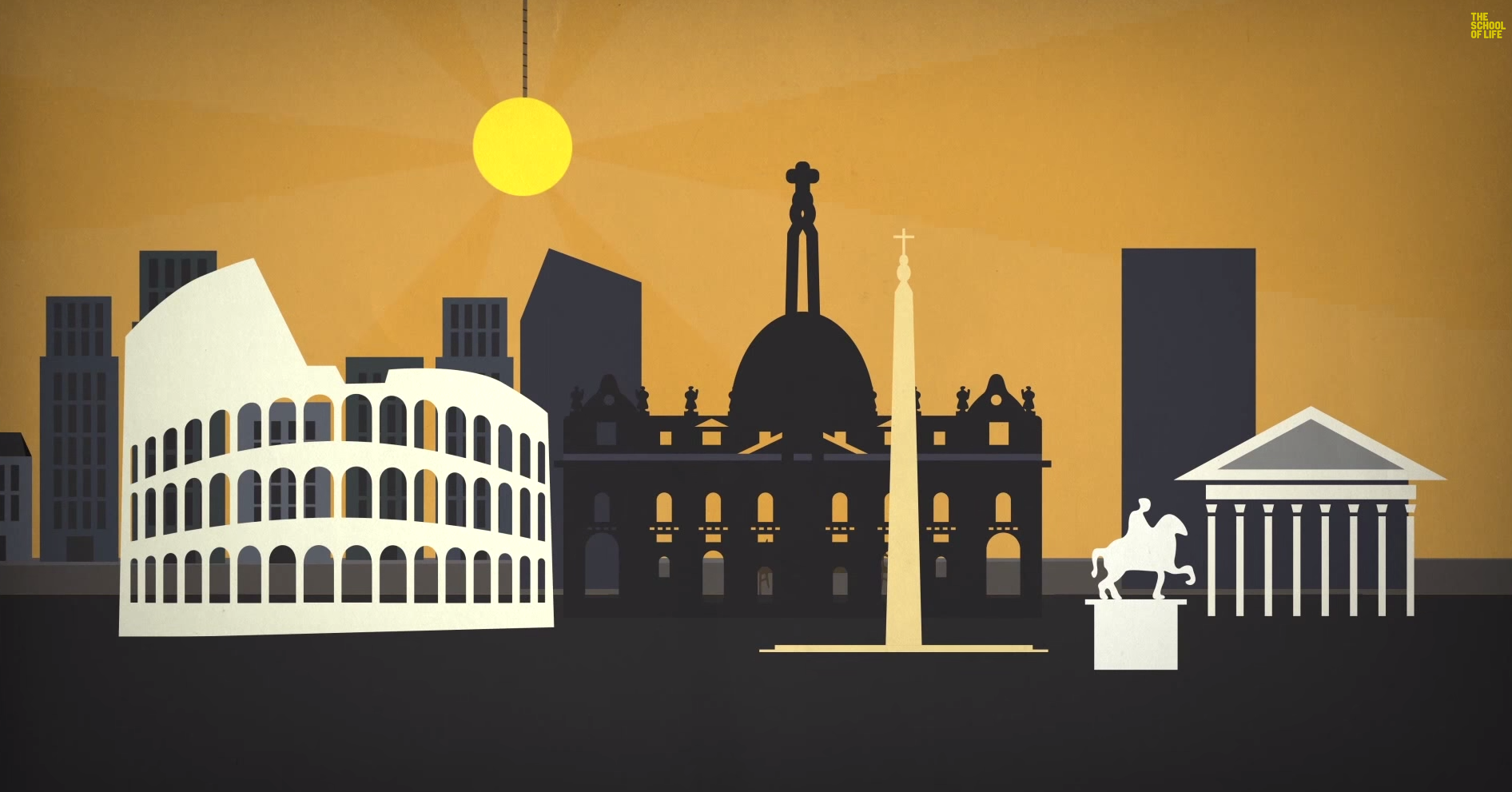 Only a few cities in the world are truly beautiful—and none of them were built in recent history. At least, that’s what folks at the YouTube channel The School of Life say. In their video “How to Make an Attractive City,” they lay out six fundamental rules cities need to be beautiful. Below is a summary of their urban vision, and a response about what they get wrong.

Not Too Chaotic; Not Too Ordered

An ordered city has balance, symmetry, and repetition. When it’s a mess, it feels like no one is in charge—like a skyscraper springing out of a low-density neighborhood—while excessive repetition is harsh and bleak.

Cities should seek order and variety to create organized complexity. The city of Telc in the Czech Republic, for example, requires that every home is the same width and height but they are allowed to vary in form and color, allowing passersby to focus on a few key differences without being over stimulated.

Modern cities are filled with brutal, anonymous office buildings on dead streets connected by cold freeways. There is no life or activity on the ground, even as colorful ideas percolate inside.

The streets we love are alive with activity. They are filled with people and lined with transparent storefronts that allow us to see people at work.

Imagine if a pipeline were placed across a scenic river—people would throw a fit (and they have). But the Roman aqueduct isn’t upsetting because it blends functionality with a beautiful form. It’s not the pipe we hate, but the ugliness.

We’re under the illusion that we want to live alone. “More and more people,” they say, “tuck themselves away in a private realm—and it’s been a disaster. It’s become deadly, cold, boring, and very, very wasteful on the environment.”

Beautiful cities have bustling public squares where people can drink coffee or read the newspaper. These squares should be intimate and enclosed enough to feel like an extension of your home, but large enough to give us relief from our cozy private quarters. They even offer an ideal size: 30 meters across. If it’s too large, we feel dislocated and out of proportion—you should be able to recognize a face across the square. It should feel contained, but not claustrophobic.

We need small back streets to feel cozy and get lost with wide boulevards to help us navigate and establish a sense of place.

Close proximity to our neighbors is also important, since people are nicer when they’re always a bit on display.

The showpieces of a city show our priorities as a society—and currently it’s giant towers housing even bigger corporations. Often cities are known for their most iconic skyscrapers—be it the Sears Tower in Chicago, Chrysler Building in New York, or Transamerica Pyramid in San Francisco. The big things show what we want because they demand our attention.

We should reserve the honor to symbols of our higher priorities. “Towers have to be worthy of their prominence. They must be aligned with our best ambitions and long term needs.” That’s why they propose a general height limit of five-stories with dense, compact development.

Each city has its own culture, character, strengths, and weaknesses. They should connect their character with distinctive local materials and forms. In Seattle, that might mean rich cedars and local sandstone. Setting a distinctive character gives a city a sense of place and a unique identity. If a city is too generic, there is no reason to live, work, or visit it over any other city.

First, an intellectual confusion about beauty. “We think that no one has a right to say what’s beautiful and what’s ugly.” But this type of relativism is dangerous, and leaves the community vulnerable to the aesthetic whims of each developer.

We know which cities are beautiful, and we can tell by the crowds of tourists they attract. So we ought to develop a scientific approach to beauty and enforce it through government regulation.

That leads us to the second obstacle: a lack of political will. We’ve given over the responsibility to build beautiful cities to private corporations. “Beautiful cities have only ever been created when cities impose strict and ambitious regulations,” they claim.

The goal of building is to make us not regret the nature that’s been lost. People need to decide on their local flavor of beauty and gather the political will to enforce it. That’s how we’ll build the next beautiful city.

What they get wrong

The proposal suffers from tunnel vision—it sacrifices function for beauty, it forsakes the variety it claims is essential to good living, and it shoehorns other essential traits of great cities under an aesthetic umbrella.

Cities are human habitat. They need to be healthy, productive, enriching, and functional—not just beautiful. Active and bustling streets are important because they build strong economies, offer mental and social stimulation, and provide a density that makes public investments worthwhile. It’s hard to say a bustling street is beautiful, per se, and even harder to say it’s important primarily for that reason.

Most great cities did not arise from ambitious regulations, but rather formed organically over hundreds of years. It’s overly strict regulation that can stifle the complexity and variety that give a city its beauty and function. Regulations are great at keeping the worst of urban planning at bay. But they’re not responsible for bringing the best either. Many zoning laws are responsible for the very auto-oriented dead zones that the video decries in modern cities.

In talking about scale, they’re right in asserting that density looks and functions best when focused rather than peppered through a city. A skyscraper can stick out like a sore thumb in a low-rise neighborhood—like the 33-story First Hill Plaza that sparked a sharp community response and new zoning legislation. But the solution isn’t to enact five-story height limits. It’s to create and expand the urban village model that Seattle has become famous for. It’s to put density where it belongs.

Finally, cities must provide varying levels of activity and privacy for their residents. Many seek out urban environments for their bubbling activity and social nature. But some will always need and want a quiet, private place to relax and recharge. It is unfounded to say that we all secretly like being on display to our neighbors. And a city that operates on this assumption will be an unattractive home to many.

The video does a service in making the case for beautiful cities. Too often beauty can be lost to function, leading to soulless and uninspiring cities that leave people feeling lost and disconnected. But a beautiful city without function is its own vice. Finding a balance and respecting the variety of ways that can be achieved is the formula for a great city.