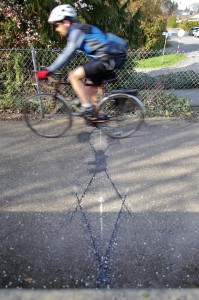 The counters are loop detectors built across the trail (see image to right), much like those installed in Seattle on the Fremont Bridge and West Seattle Bridge, but without the visual interface. Some parts of Seattle already have similar bike counters that forego the visual interface, including one on the west end of the I-90 floating bridge.

Funded by Washington State Department of Transportation, the two bike counters will monitor bike traffic at the two locations and help guide Bellevue’s future bike infrastructure investments. More bike counters are expected to appear throughout the city later this year through a grant provided by Cascade Bicycle Club. The future sites of these counters is currently undetermined.