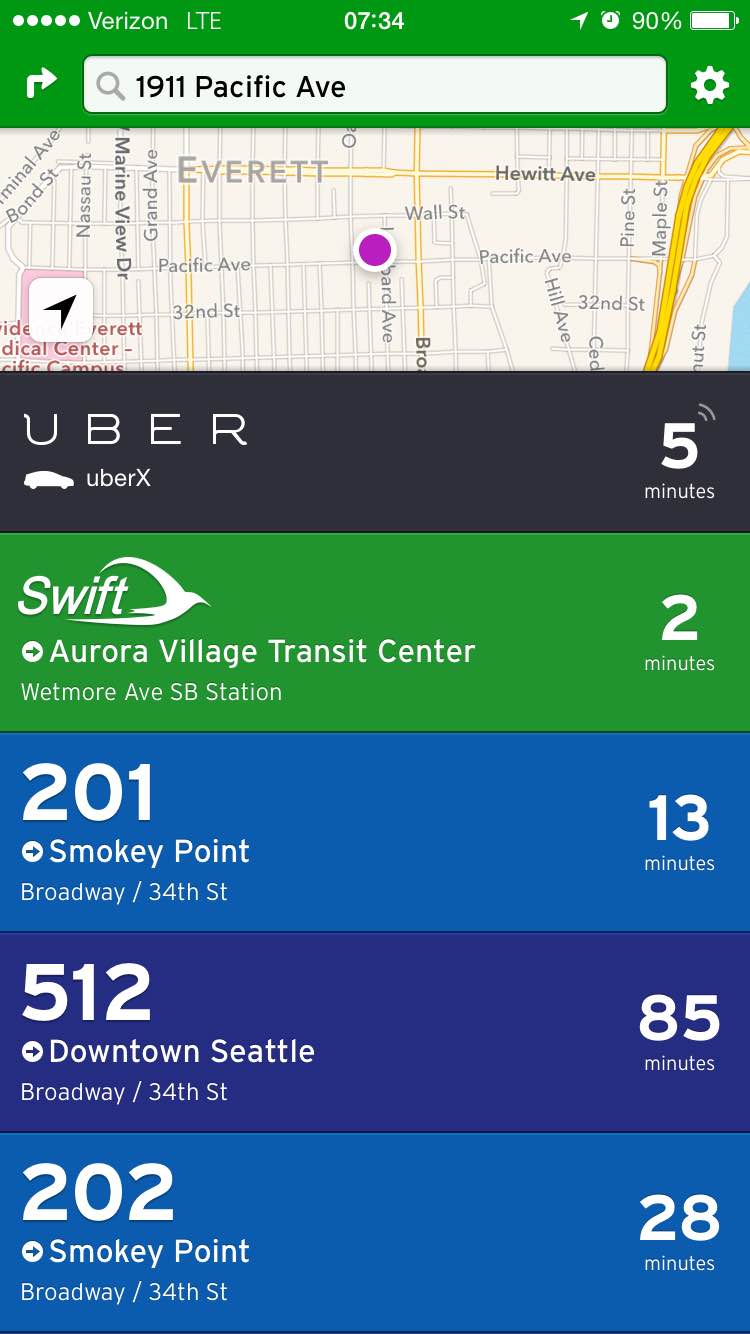 The Transit App gave the Puget Sound a very quiet, but welcome update last week. The long-awaited—and constantly requested—integration of scheduled data for Community Transit was finally dropped into the app service. You won’t see any real-time data for Community Transit buses just yet, but you can find out when the next scheduled departure is expected along with the convenient trip planning that the Transit App supports. Transit App developers say that they are still perfecting the data integration, but it’s pretty reliable from personal experience.

One interesting feature of the new Community Transit data are the color swatches in the app’s Nearby Mode. The Transit App differentiates each service type of Community Transit by color unlike the King County Metro-operated routes–which are universally blue. Community Transit routes are easy to pick out with baby blue (local routes), green (Swift, also has emblem), orange (commuter routes), and navy (Sound Transit Express buses operated by Community Transit).

To take advantage of the update, users of the Transit App need only open their app. Data for new services is automatically pushed out to the app. Essentially, the app is localized for users so that they automatically get every service and route presented to them based upon their current region. For instance, if a user is in Seattle, but pans all of the way across the US to DC, the app will automatically present data from the DC region.

There’s still a few other Puget Sound transit agencies that we hope developers at the Transit App will include in the future. Our ranked wishlist includes the following: 1. Whatcom Transit Authority, 2. Everett Transit, 3. Skagit Transit, 4. Island Transit, and 5. Amtrak Cascades. Adding these five agencies would fully round out the local public transit agencies to give local Puget Sounders seamless data from the Canadian border to the State Capitol.

On a final note, Community Transit is still in the process of perfecting their real-time data system before launching their own Bus Finder app and service. Presumably, this will eventually lead to developer-accessible real-time information, too. But whatever the future holds there, it’s great to see an agency like Community Transit provide scheduled data for their buses now. Today’s riders get the benefit of open data from services like the Transit App who can transform those pieces of data into a consumable way that highlights a variety choices on-the-fly. That’s a huge win for all.

*Service providers providing real-time arrival information on buses, except those operated under contract by Community Transit.