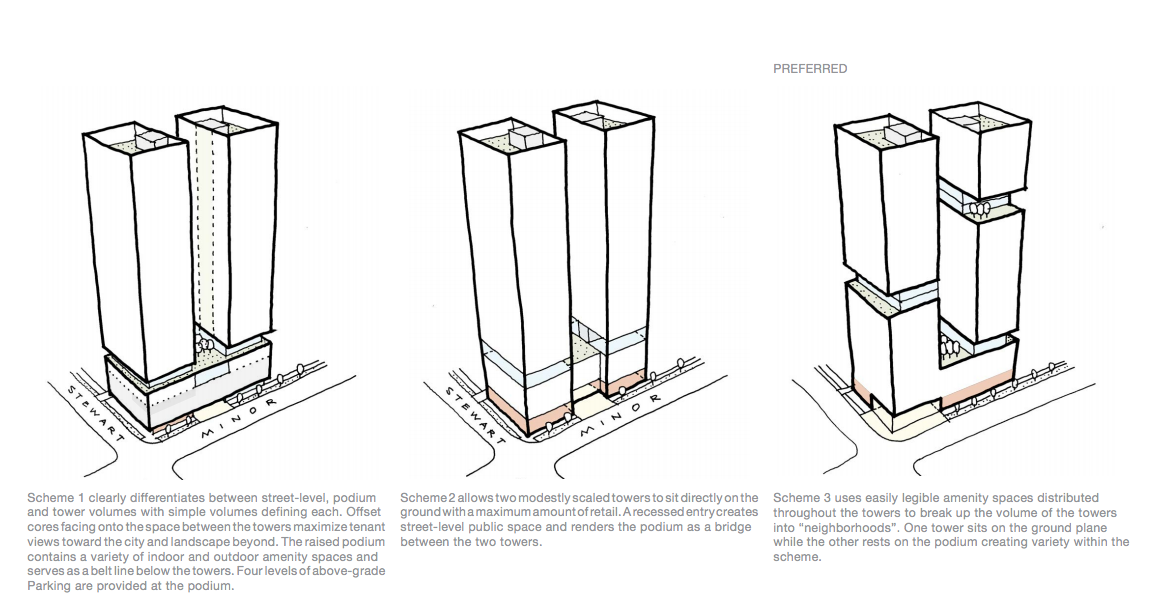 The Denny Triangle is a hotbed for highrise construction with over a dozen different projects are either already planned or under construction. A new project, Crescent Heights, could end up delivering not one, but two new towers within the neighborhood if all goes according to plan. Designed by architecture firm Gensler, the twin towers would rise to a height of 400 feet and sit atop an 8-story podium. The project is residentially-focused with a planned total of 600 dwellings and 437 parking stalls. A modest amount of ground floor retail will also be featured in any final design (up to 7,500 square feet is planned).

Crescent Heights is situated near the northern edge of the Denny Triangle, located at the crossroads of Minor Ave and Stewart St. The site consists of two lots, one that serves as a large surface parking and the other which houses a single-story office building. The office building is planned for removal. Many of the surrounding parcels of land contain a mix of surface parking and single-story office and retail buildings as well. But as seen below, most will swiftly convert to a mix of highrise buildings in the coming years.

Three different schemes have been proposed by the applicants. Each scheme proposes two towers over a podium structure with 39 stories (400 feet). Maximum zoning for the site allows structures up to 400 feet, so the maximum height of the structures is no coincendence. In fact, DMC 240/290-400 zoning requires residential structures in excess of 290 feet to use some form of inclusionary zoning provisions to maximize the zoning potential. The applicants in this case have chosen to provide low-income and medium-income housing offsite, likely by fee.

In the first scheme, the architects have explored a massing that consists of nearly two identical towers. The parapets at the top of the structures flare upward in opposing directions to distinguish from the interior portions of the towers. Very modest balconies are nestled into the buildings almost as if to create some depth to the structures and reinforce the linearity of the design.

Meanwhile, the podium structure is of a completely different style from the tower structures, which is more than just a soft hint at its street-level orientation. In fact, this design would allow an abundance of open space–on top, above the podium, and adjacent to retail.

Architects highlight some striking negatives in the design. For one, this design would contain four levels of parking above ground instead of below grade. Minimal retail would be located at the street level. And, the podium-to-tower relationship would not be much of a departure over the typical office or residential tower design. In other words, the architects feel that it would be a stereotypical design.

In a second scheme, the architects have again chosen a twin approach to the tower. However, the towers almost stand entirely on their own. Instead of sitting atop of podium, the towers are connected by a common structured setback from Minor Ave.

The towers have considerably more volume that appear to weight them down to the street. More emphasis is placed on having balconies at the corners of the building than in Scheme 1. The parapets also fold over to give some additional architectural expression. And, parking in this scheme would remain below ground while retail would be able to maximize the street level.

The architects do see two big negatives in this design. Because the towers are symmetrical, they inherently lack a context to surrounding and are inward looking. And beyond that, towers of this class require that building facades are highly detailed in order to ensure that they’re visually interesting.

The third scheme is the preferred option by the architects. This option creates the most visual and physical variety in the tower designs. The tower facades have multiple articulations at various levels, which facilitate in unique massings throughout the structures. While these articulations create sections of the towers, they are consistent in their design which visually ties them together as one complete building.

At these articulation points, the architects plan to implement the building amenity program, which include things like terraces, solariums, lounges, decks, libraries, and more. For residents, this spreading out of amenities throughout the buildings could be a wonderful feature.

Like Scheme 2, parking is located below ground and retail is maximized at the street. Meanwhile, to further distinguish the buildings beyond massing and articulation, the architects have proposed some rooftop features that will add flare and visual interest amongst the skyline.

The floor plans of the Scheme 3 show a variety of residential unit sizes and forms. Units will range from studios to two-bedrooms mixed throughout all of the structures and floors. Two primary retail spaces would be located on the ground floor. The largest retail space is planned for Minor Ave, but a significant retail space would also be focused on the Stewart St side. Between these frontage spaces, a lobby and lounge area would be situated for the residential uses. Also worth noting, garage parking access will be located at the rear of the building via the alleyway connecting Stewart St to Virginia St.

Streets throughout the Denny Triangle are substandard with most lacking adequate pedestrian facilities for amount of today’s foot traffic and very poor planter strips. All proposals of Crescent Heights would greatly improve the public realm. Sidewalks would be extended from 4 feet to 6 feet on Minor Ave while Stewart St would see sidewalks go from 4 feet to 10 feet. The two mature trees on Stewart St will be retained within an improved set of planter strips. New trees will be planted along Minor Ave to enhance the frontage landscaping there and provide amenities to residents and passerby. A curb bulb will also be deployed at the northeast corner of the site match a planned one at … This should slow traffic down and provide some ease to pedestrians crossing.

If you’re interested in attending the community design review meeting for this project, you can do so tonight. The Downtown Design Review Board will meet at City Hall in the Bertha Landes Room, located at 600 Fifth Avenue. The design review meeting begin promptly at 7pm. Alternatively, if you wish submit comments in written form, you can do so by e-mailing Garry Papers, Project Planner, at Garry.Papers@seattle.gov and the Department of Planning and Development (DPD) at PRC@seattle.gov.