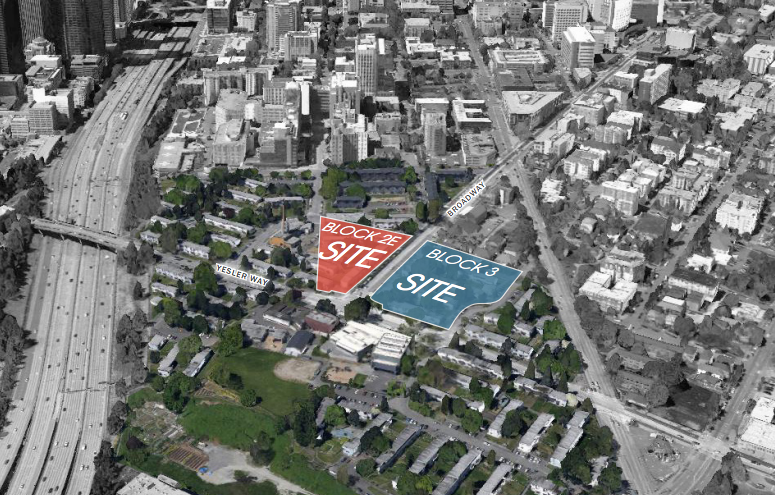 Vulcan Real Estate has teamed up with Runberg Architecture Group to develop plans for two central blocks in Yesler Terrace. Known as Block 2E (123 Broadway) and Block 3 (120 Broadway), the sites comprise 2.7 acres in the city’s most notable social housing community. Vulcan purchased the properties back in October from the Seattle Housing Authority (SHA) with the goal of creating a vibrant mixed-income community. The news wasn’t surprising; SHA had long had Vulcan in mind as a preferred neighborhood developer. Money raised from the land sale will help SHA realize its efforts to replace aging social housing buildings and add income-restricted units to the neighborhood.

The sites are zoned as MPC – YT, a special Master Planned Community zoning for Yesler Terrace that allows a wide ranging mix of uses and building heights up to 240 feet. Vulcan has moved forward development proposals that emphasize residential use with a modest amount of ground floor retail. In total, the projects represent up to 435 apartment units and 10,500 square feet of retail space. Building heights would cap out at 7 stories.

Vulcan’s sites are in the very central core of the master planned community with ample access to Downtown Seattle (mere blocks away), social services, transit (including a new streetcar stop), employment centers, retail services, and recreational opportunities. Yet, the proposals drastically undershoot the maximum potential for development given that local zoning would permit greater density in the form of towers. Vulcan chose a smaller scale approach for their proposals because they felt it would better reflect the neighborhood character and meet the overall vision that the company has for their future tenants.

Vulcan has developed three different options for Block 2E massings. The options range from 193 to 202 residential units, 2,051 square feet and 2,773 square feet retail space, and 136 to 137 parking stalls. Each option would see retail focused on the ground floor and at the intersection of Yesler Way and Broadway.

Option A is a traditional courtyard apartment block approach. To break up the block and comply with code, the massings would be broken into two buildings and create additional permeability via a new passageway for pedestrians. Option B is a variation of Option A, but creates one structure as opposed to two, and has a courtyard open onto Broadway. Option C flips the massing of Option B toward the pedestrian alleyway. The block massing is modified to create two open courtyards and link views toward the steam tower and Downtown Seattle.

The applicants list the pros and cons of each option as follows:

Vulcan has developed three different options for Block 3massings. The options range from 227 to 240 residential units, 5,835 square feet and 13,023 square feet retail space, and 164 to 179 parking stalls. Each option would see retail focused on the ground floor along the Yesler Way frontage.

The applicants list the pros and cons of each option as follows:

In advance of large construction and development projects like Blocks 2E and 3, SHA and its partners have been working to improve the local infrastructure and streetscapes within Yesler Terrace. Most prominently, the City of Seattle has installed bike lanes and the First Hill Streetcar line on Broadway and Yesler Way, a hillclimb at 10th Ave S, and new pedestrian realm features like the Green Street Loop seen below.

Vulcan will further deliver quality improvements in the form of a 9th Ave Pedestrian Path, curb and gutter, planter strips and boxes, and generous sidewalks. Over three dozen new street trees will line the perimeter of proposed buildings and extensive landscaping will enhance the comfort of the pedestrian realm. North of Block 3, a small pocket park is likely to be developed in accordance with SHA’s vision for the neighborhood. Combined, these amenities will make the blocks feel leafy and green for future residents and shoppers.

If you’re interested in attending the community design review meeting for this project, you can do so tonight. The East Design Review Board will meet at Seattle University in the Admissions & Alumni Community Building, located at 824 12th Avenue. There will be simultaneous design review sessions for the respective projects beginning promptly at 6.30pm and lasting until 9.30pm. Alternatively, if you wish submit comments in written form, you can do so by e-mailing Shelley Bolser, Project Planner, at Shelley.Bolser@seattle.gov and the Department of Planning and Development (DPD) at PRC@seattle.gov.