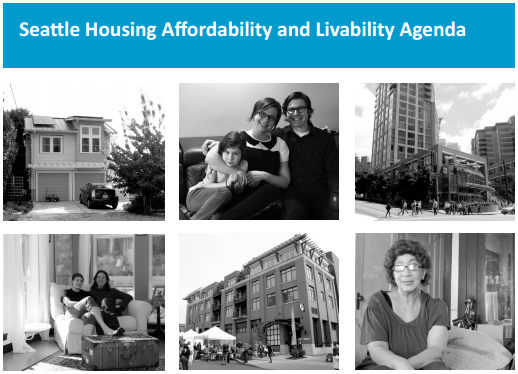 Last week, amid much histrionics, The Seattle Times leaked a draft report of the Housing Affordability and Livability Agenda (HALA) Committee. Owen chimed in on the absurd Time article in the week while I shared my take on the recommendations and Scott added some in depth context and analysis.Today, the final HALA recommendations were publicly released, and they’re quite extensive with 76 pages of policy priorities and analysis.

I’m a pro-rent control, pro-linkage fee, pro-inclusionary zoning, and pro-social housing nerd–which obviously puts me on really good terms with developers and market urbanists. I was initially skeptical of the composition of HALA. But, I also realized that the only way for my list of housing priorities to have any shot at succeeding, we needed to liberalize our planning and zoning codes. So I was amazed and shocked that the recommendations were so progressive–but there is work to be done, because we can make them even better.

What follows is the e-mail I sent Mayor Murray and sitting Councilmembers late last week to argue for making Seattle more accessible to all. I stand by this in light of today’s final recommendations. I’m tired of visionless charlatans championing failed policies and continuance of the rampant (49% of the city!) exclusionary zoning practices that have lead to rising land prices, rising housing costs, and are pricing people out of the city. We passed $15 per hour. We righteously won gay marriage. We can win an inclusive city, and walk back the injustice of 92 years of exclusionary zoning.

I’m writing in full support of the HALA draft recommendations. Every. Single. One.

Seattle’s original zoning plan was a snapshot as things existed, haphazardly, in 1923 – shortly after the surrounding cities – villages, really – had been incorporated into the City. In subsequent years, especially outside the downtown core, much of that plan has – confoundedly, immorally, unjustly – been downzoned and adjusted to be even more exclusionary.

This is incredible, as Seattle’s population has nearly double since then – and continues to grow. The original zoning plan was not a means to allow the city to innovate, build, grow, adapt as zoning plans should.

The sum total of 92 years of exclusionary zoning through widespread adoption and protectionism of single family zoning has increased the real value of detached homes in this city 400, 500, 600, 700% in as little as 20-30 years. That equity has come at the expense of ever-increasing rents for tenants, citywide. It has come from the ever-increasing costs to own a home for newcomers and those attempting to move up the economic ladder, regionally. I’m sick of watching my friends have to leave the city or struggle to afford – let alone find – housing. I’m appalled that we’ve made it nearly impossible for those without means to find adequate housing in this city.

Tragically, this was entirely avoidable. We have some of the worst land use policies in the U.S., if not the world.

At Barcelona’s density, Seattle could house over three and a quarter million people – imagine!

The City of Stuttgart, roughly the same area and population of Seattle, has less than 5% of it’s land dedicated to single family housing – and 50% dedicated to green space, forest. Beautiful!

Thankfully, the zoning code is not built in stone! Let’s correct the travesty of 92 years of zoning designed for EXCLUSION, by aiming for a century (or more!) zoned for INCLUSION.

Let’s support the means for developers to build more housing, of all types, everywhere.

Let’s build a city for all, a city that stops the displacement of very low, low and even moderate income residents to South King County, to Pierce County.

Let’s allow families and residents like those above, below and beside mine on the economic ladder to be able to share in the privilege, security of tenure, and equity of this city – and not just those privileged or lucky enough to have moved here before us. Equity that is created and increased by folks moving to the city, many of which ultimately are priced out by 19th century zoning.

Stop pricing us out. Share the city. Share the equity. Don’t punish newcomers and children to protect the inequity-increasing status quo.

With the greatest of hope,
Michael Eliason