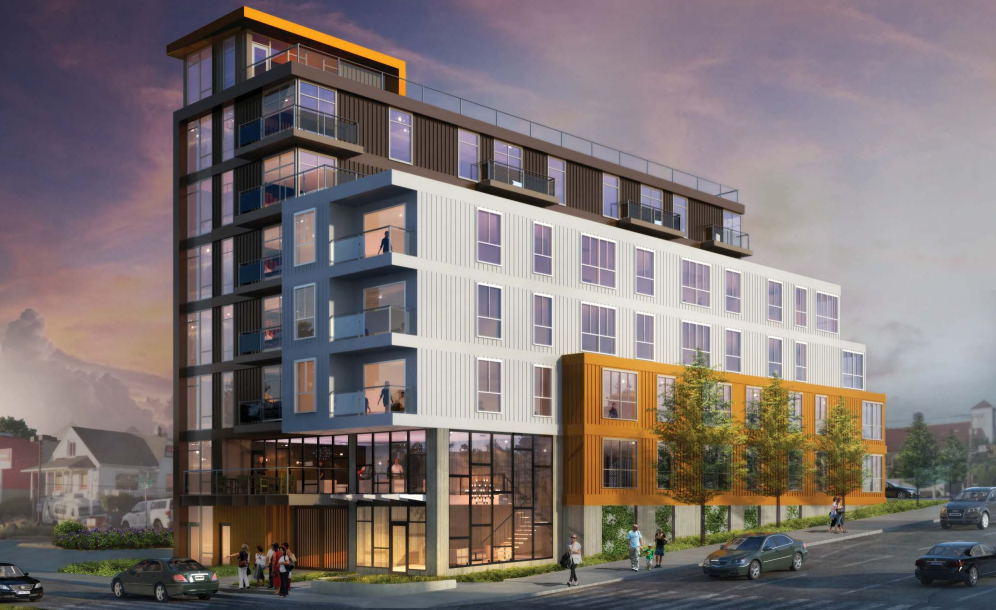 One project in Interbay embodies how big development can be accomplished at a definitively fine grain and tailored toward the human scale. The proposal for a 7-story multifamily residential building borrows from Interbay’s gritty industrial characteristics and warmly transforms them into a lightweight and daring modern design. Clark Design Group, PLLC, a Seattle architecture firm, was commissioned by developer Paragon Real Estate to prepare site plans for the project. Working project documents refer to the building as The Crane @ Interbay, presumably inspired by cranes operating in the nearby Balmer railway depot.

The project itself is located in the growing urban heart of Interbay, on the northern block of W Dravus St just west of 15th Ave W. The site is relatively constrained given the confluence of streets and smallness of the site — coming in at just 7,424 square feet — but the architects have worked within those parameters to create a masterpiece using tried and true techniques like connected vertical fenestration, complimentary but contrasting colors, and upper floor stepbacks.

Plans call for 38 one-bedroom dwelling units with onsite amenities for residents.  Building amenities will consist of both indoor leisure space and two outdoor terraces located on top of the 6th and 7th floors. Due to the height and zoning, the developers will buy additional height through the provision of onsite affordable housing units for 50 years, though the number has yet to be determined. The land use code also requires one parking space per dwelling unit, but Paragon has hedged their bets and decided to go in for an exception to reduce the number of spaces. 19 parking spaces will be provided for residents, a parking ratio of 0.5 spaces per dwelling unit. Bike storage will also be available onsite.

The site is presently developed, but the existing single-story commercial building will be removed in order to prepare the site for redevelopment. Prevailing uses in the vicinity are generally commercial in nature, including an insurance company and the Seattle Film Institute just north of the site, while industrial uses predominate blocks further north and west.

If the building resembles railway boxcars or storage containers, that’s no accident. Architects took their design cues from the massive rail-based container transfer facility just west of the site. The facade reinforces those attributes with corrugated steel painted in a variety of showy tones. The brashness of mercurial orange is balanced with the hues of charcoal grey. Adding a bit of pizzaz to the pallet is a ghostly white featured on the bulk of the building. On the main frontage of Dravus, the colors appear successively every two floors, but it’s at the edges of the building that they are accentuated. Here, they emphasize the boxy form of containers and build verticality while serving to breakup the scale and bulk of the structure.

Perhaps most striking in the building is the exterior staircase framed by a ribbon of mercurial orange. The framing offers the perfect opportunity to highlight the namesake of the building to passerby on 15th Ave W. Meanwhile, the architects have also implemented progressive stepbacks of the structure to further reduce the weight of the building over the public realm below. Doing so has enabled space on the upper floors to be used for semi-private spaces like balconies and common gardens for residents.

Knowing that 16th Ave W and W Dravus St is the best place for public interaction with the building, the architects have focused their efforts on creating a prominent facade that appears as an entrance and lobby at the corner. Transitioning from the solid corrugated metal facade on Dravus, the corner opens up with a large, recessed all-window facade standing two stories tall. The third floor projects outward to create a small cantilevering above and landscaped beds breath animate life at the edges.

Meanwhile, the lobby provides a space for the respite of residents at the ground floor, but also leads to an airy, open staircase to the amenity area on the floor above. This amenity area is directly connected to residential units on the second floor, an internal staircase to all floors, and the elevator core. But perhaps not so noticeable on the western frontage is the secondary residential entryway and access to the garage just north of main lobby. Architects have cleverly screened the entryway by using golden tones similar to the corrugate metal panelling on the same frontage. Sticking with the cantilever projection theme, balconies and semi-weather protection also jut out on the west facade.

In order to make all of this happen, the developers hope to secure a series of departures from the land use code by way of the local Design Review Board. The most important of these departures are requirements for upper floor setbacks. As a development in the Seattle Mixed-Dravus 40-85 zone, a setback of 50 feet is typically required along Dravus when building above the first 40 feet. The proposal at hand offers a smaller setback for the 6th and 7th floors at 27 feet. As the architects suggest, the decreased setback would have little overall effect on the character of the Dravus streetscape. In fact, their solution would present gradual vertical and horizontal changes to draw attention to the unique features of the building and create a neighborhood focal point. If the standard setback were applied, the design solutions offered would simply not be possible.

So there you have it, that’s Interbay’s next big project.