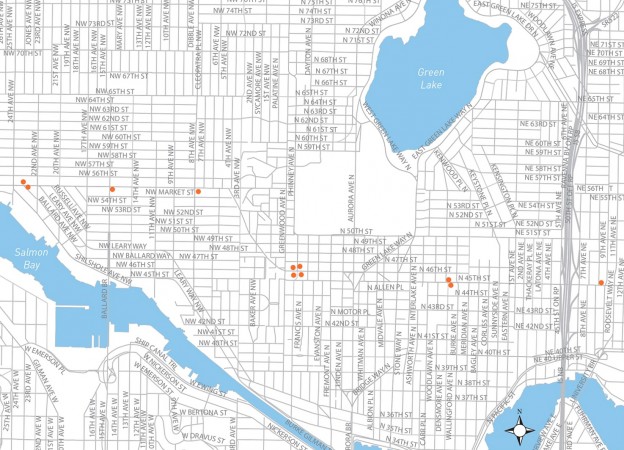 Later this month, the Seattle Department of Transportation (SDOT) will flip the switch on newly installed real-time information signs (RTIS) in North Seattle. Between Ballard and the University District, riders at 11 bus stops will see the fruits of RTIS as part of technology and service upgrades along the corridor of King County Metro Route 44. RTIS, however, represents just the first of many big investments that SDOT hopes to make in the corridor over the coming years.

I spoke to Bill Bryant, SDOT Transit Division Deputy Director, to get a clearer picture on the RTIS program and where SDOT plans to go in the future. Bryant was candid about improvements to the corridor of Route 44 saying that RTIS will enhance the user experience of riders in a variety of ways:

SDOT is using real-time information signs similar to those seen at many RapidRide and Rainier Avenue stops. The signs contain LED-lit reader boards viewable from two sides. Depending on sign size, up to four bus trips can be displayed on the reader boards simultaneously with routes cycling through sequentially based upon next arrival times. All buses departing within a 30-minute window will be shown on the Route 44 RTIS displays. Data for the signs is sourced from OneBusAway (OBA), which is powered by Metro’s bus tracking system. But unlike RapidRide stops, the real-time information signs along the corridor will not be equipped with ORCA card readers. When asked if they would be in the future, Bryant said that they were designed to easily accommodate ORCA readers in the future.

Riders will want to know that data being provided by RTIS is reliable. Bryant is confident that OBA’s data should be fairly accurate throughout the corridor. But he did noted that the information shown on signs is only as good as the data going in. Data for buses close to the beginning of the routes (e.g. Market St & Ballard Ave) could occasionally spit out bad information as buses return to their terminals, much like they do today with OBA data. So there’s a word of caution there, but it will still be a dramatic improvement over the status quo.

Initial installation of the signs required temporary closure of some bus stops along the corridor, which many local riders may recall from earlier this summer. Working in conjunction with Metro, SDOT chose to temporarily close these stops in order to anchor the signs into sidewalks and tap into the City’s fiber network.

It’s also worth mentioning that SDOT chose stops with the highest number of average daily boardings along the corridor. Each stop currently has between 100 and 1,000 daily weekday boardings. Individually, the stop-level boardings may not seem like much, but it’s worth bearing in mind that Route 44 serves upwards of 7,700 riders each weekday. The stops selected by SDOT for RTIS collectively serve nearly 4,225 riders across 16 bus routes each weekday, meaning that a substantial number of riders will benefit from reliable bus arrival information.

Route 44 isn’t the only bus line getting some swanky tech upgrades. Bryant said that SDOT is mulling over a package of RTIS projects as spot and corridor improvements in Greenwood, Uptown, and along 23rd Ave: