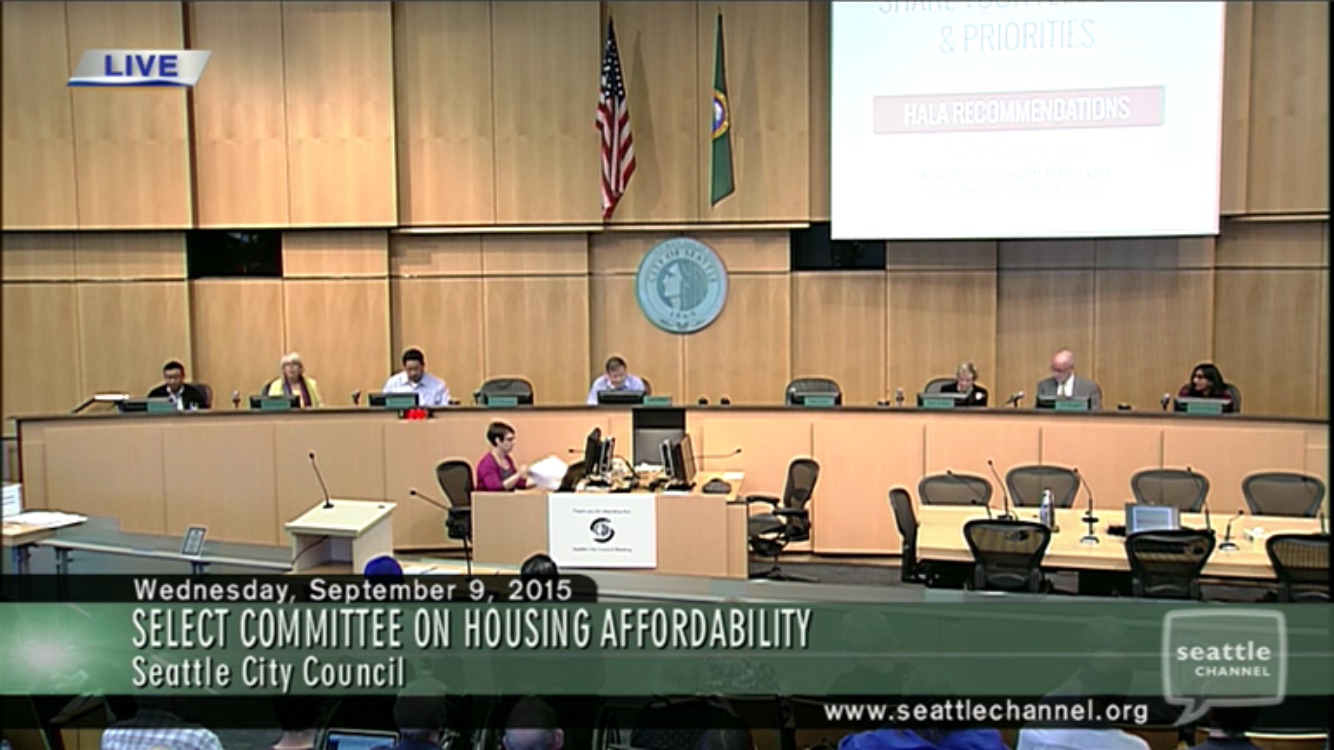 The Seattle City Council met last night as the Select Committee on Housing Affordability, an ad hoc committee formed to discuss, vet, and realize the Mayor’s Housing Affordability and Livability Agenda (HALA) recommendations. The meeting represents an important milestone in the Council’s overall legislative agenda as it considers how to establish a formal framework to process and adopt the range of HALA policy recommendations. The breadth of these recommendations is astonishing and total sixty-five individual policies on affordable housing through regulations and programs.

The meeting was designated as an initial public hearing on two specific resolutions regarding the HALA work plan and policy direction on Commercial Linkage Fees (CLF) and Mandatory Inclusionary Housing (MIH) tied to future upzones. The hearing solicited over two hours of public comment and served as a clear refutation of claims that the HALA recommendations were meant to be secretive ($) or somehow being forced on the city. In fact, this public hearing is part of a longer process that is meant to provide education to the public and feedback to the Council.

Councilmember Mike O’Brien opened the meeting outlining the items on the work plan and the timeline to adopt the recommendations. Development of regulations for the CLF and MIH policies are being fast-tracked for early adoption to ensure affordable housing regulations are in place as zoning changes are implemented. Meanwhile, the total HALA work plan is envisioned to take two years with final implementation occurring late 2017.

There was a huge amount of positive support for the HALA policy framework — including us from The Urbanist. Chris Persons spoke on behalf of Capitol Hill Housing and as a single-family homeowner, indicating that the “HALA recommendations are the right course” and “that we have to make room in all our communities” for new residents, running counter to some skepticism that affordable housing advocates don’t support upzones.

A representative from the Downtown Seattle Association spoke in support of the recommendations and called out perhaps the most important reason for supporting mandatory inclusionary zoning — people need to be able to live near where they work. The bid-rent curve makes this difficult in central cities and generally, lower incomes are priced out of these areas.

There were also a lot of personal stories, including one from Zach Shaner, a local writer and entrepreneur, who described his experience living in many different parts of the city and not fitting into the traditional mold of putting down roots. Yet at the same time, his professional work in transit advocacy and innovation adds to the depth and diversity of the city. He emphasized his desire for a ‘radically progressive city’ and called for the Council to use their power to build as many units as possible.

Unsurprisingly, there was some criticism of the HALA recommendations. As one speaker put it, the ‘Grand Bargain’ is only a ‘Grand Giveaway to developers.’ Some critics felt that the Council should merely consider development impact fees while others thought the recommendations weren’t enough. Indeed, some speakers instead called for the City to use its bonding capacity to build affordable housing. But nearly all the criticism of the recommendations were laser focused on upzones. The criticism of zoning changes should be familiar. Speakers repeated points about developable capacity or expressed the preference to see some neighborhoods developed, but not theirs.

Supporters of the HALA recommendations shouldn’t be discouraged. The unofficial tally indicated that comments in support outnumbered those opposed nearly five to two. Perhaps most tellingly, the comments from those opposed were nearly all from individuals. In contrast, those in support came from a huge number of individuals and organizations. And perhaps the most satisfying aspect of the comments, nearly all of those working professionally on affordable housing spoke in support.

You can watch the 3-hour long meeting below and weigh in with your comments to the City Council via e-mail.