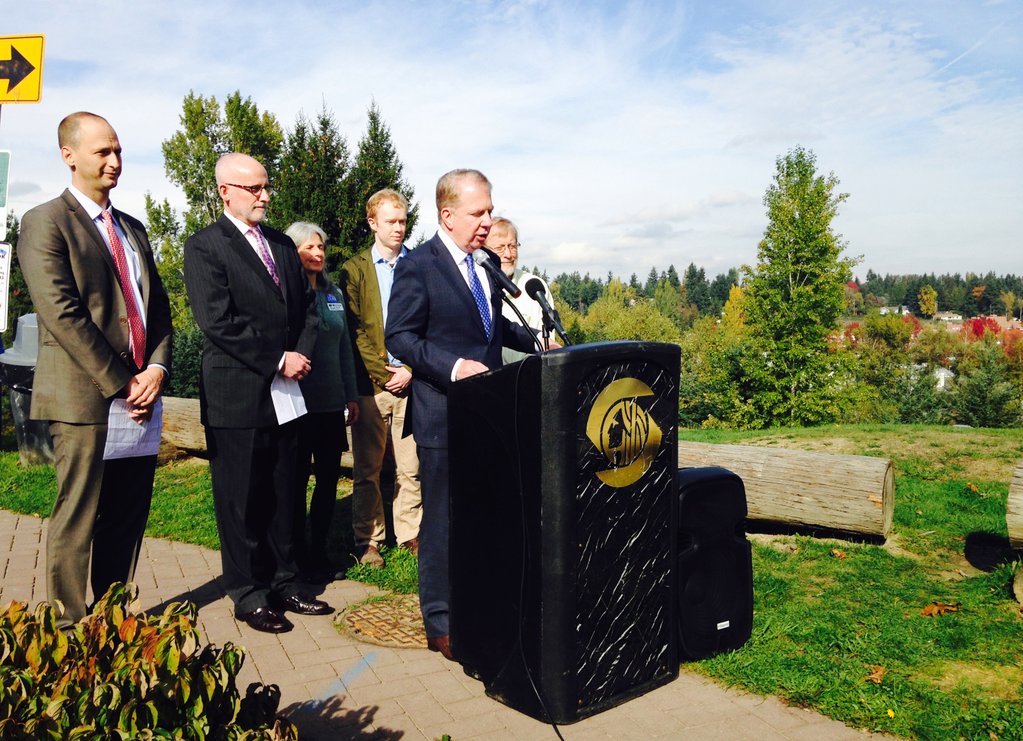 Walking is getting a lot of attention in Seattle recently, and unsurprisingly, much of that has to do with rapid growth and changing expectations about how people get around. Walking, in a sense, has become a top priority in almost everyone’s minds. Neighbhoods across the city are demanding better walking facilities now while residents and workers in densifying neighborhoods push for wider and always-open sidewalks. At a press conference yesterday, Mayor Ed Murray released his latest proposal to give more Seattleites more options when it comes to getting around on foot using innovative approaches. Flanking the Mayor at his press conference, Councilmember Tim Burgess, SDOT Director Scott Kubly, and supporters from advocacy groups like Seattle Neighborhood Greenways lined up to back the plan.

The Mayor laid out the challenge and vision for a city of walking:

To be a truly walkable city, we need to provide safer pathways to schools, parks, transit and shops. This innovative approach stretches our dollars to meet this need across Seattle by significantly reducing sidewalk construction costs. Everyone – from schoolkids to seniors – should have the opportunity to walk their neighborhoods safely.

Murray wants to stretch City dollars for sidewalk projects. His plan would implement more cost-effective techniques in sidewalk materials and designs. In fact, some “sidewalks” might not even be what we consider as a traditional sidewalk. Murray is also proposing the development of new tools for and partnerships with private individuals to construct walking facilities.

Under the Mayor’s plans, the Seattle Department of Transportation (SDOT) will deliver at least 250 blocks of new sidewalks over the next nine years if the Levy to Move Seattle passes in November. Those sidewalks would be constructed at the same cost of 150 blocks using the traditional concrete sidewalk model. To make that happen, sidewalks could be constructed with stamped concrete, stained asphalt, at-grade sidewalks separated by curbs or bioswales and landscaping, and other quick-to-implement, low-cost pedestrian infrastructure solutions. Those construction methods can result in substantial savings over the traditional concrete sidewalk. In Seattle, the full curb, gutter, and concrete sidewalks can cost well over $300,000 per block-face.

Blocks to be constructed using lower-cost methods in 2016 will be located in four geographic areas of the city. Those improvements are being paid for by $1.5 million earmarked from the Safe Routes to School and Sidewalk Development program funds. Seven blocks will appear in North Seattle on 3oth Ave NE from NE 130th St to NE 137 St. Another two blocks will be constructed near Arbor Heights Elementary School in West Seattle. The Broadview Neighborhood could get extensive sidewalk improvements due to a partnership with Seattle Public Utilities. That City department has plans to upgrade stormwater throughout the neighborhood meaning that drainage installation could partially reduce sidewalk installation costs by tying projects together. And while a determination for a precise location hasn’t yet been made, Southeast Seattle is slated to get two more blocks of sidewalks as well.

That may not sound like a lot, but as Scott Kubly, SDOT Director, plainly noted at the press conference, “SDOT can deliver three blocks of sidewalk at the cost of one traditional block” through the low-cost sidewalk program. Indeed, that’s not an inconsequential difference in service delivery. And taken as a whole, 250 blocks over nine years gets Seattle a lot closer to fully connecting the city’s walking network, especially in areas with serious gaps. But it’s worth bearing in mind that about 28% of the city’s block-faces still lack any pedestrian facilities. That’s a somber number. But by targeting investments on one side of a street instead of two where none yet exist, the benefits are almost equal to improving both.

Murray’s plan doesn’t just stop there. He also wants private parties to help expand the sidewalk network. The first way that this could be achieved is by developing new partnerships with homeowners and businesses. Installation of new sidewalks could be directly paid for by private individuals or piggyback on targeted development funds. New development is an obvious way to build out sidewalk infrastructure, but the Mayor realizes that this could be better leveraged. Through incentives, the Mayor believes that even better pedestrian environments could be developed saving the City future efforts later.

Murray has also made it a priority to step up enforcement of sidewalk repair when responsibility is in the hands of private entities. This could involve greater oversight and inspection during project construction and disturbance of sidewalk conditions or more actively requiring property owners to fix cracks or broken blocks. In extreme cases of non-compliance, the City could more rigorously institute liens against property owners. On the flip side, Murray hopes to empower people on the ground to look out for where sidewalks improvements are needed. Using their local knowledge of sidewalk conditions, SDOT can better track them as assets and program improvements.

But perhaps most importantly, the Mayor recognizes that the needs of every pedestrian environment is different. In the same vein of the low-cost sidewalk program, Murray has put his support behind developing concept plans that fit the specific conditions within neighborhoods. Using these, private entities can more efficiently build sidewalk infrastructure that fits those local needs.

For its part, SDOT is in the middle of updating the Seattle Pedestrian Master Plan (SPMP) in consultation with the public and Seattle Pedestrian Advisory Board. Through technical expertise and public outreach, the SPMPS update will tease out many community desires, best practices, top priorities, establish performance targets, and develop a five-year implementation plan to expand the pedestrian network in the spirit of Vision Zero and Mayor Ed Murray’s campaign for safe, equitable, and interconnected communities. As part of this, SDOT is actively asking for public feedback on the SPMP through an online survey, which is open through late November.