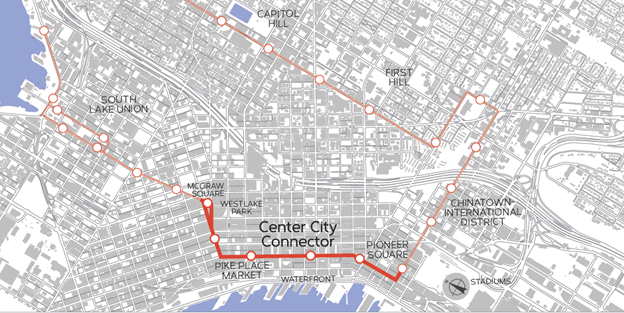 Back in September, the Seattle Department of Transportation (SDOT) held their latest round of public open houses on the Seattle Streetcar to discuss the updated design of the Center City Connector (CCC) Streetcar line. This was the last round of open houses before the project enters the Final Design phase.

The CCC is essentially a working-revenue connection between the existing South Lake Union (SLU) line and the new First Hill Streetcar (FHS) line. The CCC will feature overlapping service in central core of the city from Pioneer Square to Westlake by both lines. This will allow for an operational frequency of as little as every five minutes. Furthermore, the CCC will take full advantage of exclusive streetcar-only lanes in the center of First Avenue bypassing much of the usual traffic congestion.

At one meeting, the audience was presented with the usual collection of mounted display boards illustrating the various aspects of the project, from its preliminary schedule to visualizations of each future streetcar stop. SDOT staff and their consultants were on hand to discuss the project with visitors.

The Center City Connector will connect with the First Hill Streetcar at the existing station on S Jackson St and Occidental Ave S.

New track will be laid on the south side of the existing platform and a new connection will be required to the existing outbound track. The existing turnout will be retained to allow for trams to reverse direction here, if required.

Depending on the final design of the Madison BRT line, there is the potential for those trolleybuses to use the northbound streetcar lane at the Madison Street & Spring Street stop. This may require slight adjustments to the station in order to support both types of vehicles.

The last stop on First Avenue, serving Pike Place Market, will be located between Pike Street and Pine Street. This is also the beginning and end of the exclusive transit lanes on First Avenue.

The CCC line will then head east on Stewart Street, running along the south curb towards Westlake Avenue. While general traffic will remain westbound only, there is a chance that the contraflow streetcar lane may also be used by other transit vehicles.

The next stop, at the intersection of Stewart Street and Olive Way (between Third and Fourth Avenues), will be repurposed as a streetcar — and potentially bus — stop. The island with the great tree will be kept and the eastbound streetcar track will wrap around it. This will be the closest stop to the Downtown Seattle Transit Tunnel and should provide decent connections to the plethora of Third Avenue bus lines.

Upon reaching Westlake Avenue, the CCC line will turn north and serve a brand new island station across from the Westin Hotel and the existing South Lake Union line terminus. As with S Jackson St and Occidental Ave S, the ability for the SLU streetcars to reverse here will be retained. The existing terminal track at McGraw Square may also be retained for special events, but this will ultimately depend on the costs involved with the additional added complexity.

As mentioned, the Center City Connector will not be a “new streetcar line” as much as extensions of the existing South Lake Union line and First Hill Streetcar line. When operating, trams from SLU will operate all the way to 8th Ave S and S Jackson St, and FHS trams will operate all the way to a terminus on Westlake Avenue. This overlap of the two lines is what will allow for a frequency of every five minutes to be realized.

The CCC will operate along First Avenue, from S Jackson St to Pine Street in its own exclusive lanes. When completed, the separation between traffic and streetcars will be clearly defined, both by height (similar to Link Light Rail on MLK Jr Way S) as well as by the surface materials chosen for the trackways. The four new stations along First Avenue will all be shared, island platforms that will extend the entire block connecting to the adjacent crosswalks.

The CCC line will not be funded through the Move Seattle Levy if it passes. Instead, funding for this project will come from a mix of Federal-matching grants (FTA Small Starts) along with local sources, such as: municipal bonds and other related fees and sources (namely on-street advertising and naming rights). This particular project has already seen favored response by the Federal Transit Administration (FTA) and Federal government, which should assist the City in their funding efforts.

Along with the reconstruction of First Avenue, attention will be focused on repairing the sidewalks and making any necessary ADA compliant changes while maintaining the unique look of the existing neighborhood.

The preliminary design calls for the installation of table-top intersections along First Avenue. This will involve raising the street surface at each intersection, except Pike Street, so to ensure they are level with the sidewalks. The design of raised intersections allows for easier crossing by pedestrians while dissuading vehicles from speeding through the corridor. The First Avenue and Pike Street intersection was excluded from this treatment because the City does not wish to harm the “charm” and “character” of the entrance to Pike Place Market.

Finally, pedestrian-scramble (all way walk) signal cycles are being considered at these locations to further improve pedestrian safety. These are similar to those at Pike Street and University Street.

As part of the streetcar line construction process, First Avenue should receive a complete structural rebuild, which will ultimately provide a better ride to those driving on First Avenue. Vehicular traffic will be relegated to a single lane in both directions. Where possible, commercial loading zones will be retained, added, or relocated. And finally, signalized left-turn pockets will be provided for vehicles where appropriate.

The addition of dedicated left-turn lanes and signals as well as dedicated pedestrian crossing cycles should help improve the general traffic flow along First Avenue.

On-street parking spaces on First Avenue will largely be retained. However, there will be an overall loss of about 144 spaces — of which many currently time-restricted. Countless studies exist that show a direct correlation between less parking and improved business. But the City realizes that many people still drive into Downtown.

To help mitigate this minor loss of on-street parking, the City work with the many underutilized parking garages, located near First Avenue, to encourage their use instead — potentially offering a free tram ride in the process.

One of the noticeable omissions from this new streetcar line is a stop outside of the Seattle Art Museum (SAM). The logic behind limiting the number of stops in order to speed service indeed a priority, however, the SAM is worthy of a stop. Adding a stop there would maintain the current stop pattern of one every two blocks, and the exclusive exclusive lanes should make up for the additional 30 seconds or so that the additional stop would generate per trip. It also closes the only obvious service gap along the line.

If a stop at SAM is desirable, even if only in the future, the track layout must be planned now in order to accommodate the space that an island platform would require. As it stands, omitting a station here (even if only planned) will be seen in the future as a missed opportunity. And one that will not be easily correctable after the fact.

The past year has seen many refinements to the overall design of the Center City Connector line, leading finally to the Final Design stage of the project. The next steps will be for the City to file the required Environmental Assessment and SEPA documentation. There will be at least one, preferably two, more open houses during 2016 where the Final Design will be available for public comment and where the public will receive further updates on financing and construction.

Provided there are no serious delays, construction of the CCC may begin as early as late 2016. There are currently three different scheduling options being studied, mixing the balance between time and cost. However, at most, it should take about two years to complete the line.

As the line will require off-wire capable streetcars, it is very likely that Inekon, the current vendor, will be retained to produce the new streetcars. Now that the necessary experience exists, future purchases should be much more timely and trouble-free. However, both Pennsylvania based Brookville, and Japanese based Kinkisharyo (manufacturer of Link’s LRVs), also offer competing off-wire capable trams so alternative vendors are available to meet our city’s requirements if necessary.

While one may easily debate the merits of streetcars in modern-day cities, in the context of this project and article, it is clear that City of Seattle has tried to learn and prevent many of the problems that the two existing lines face operating in mixed traffic. By overlapping the service from the two lines, Seattle will have a frequent, reliable connection between different neighborhoods in Downtown Seattle. Whether a tourist visiting, or a worker exploring new opportunities for meals, the Center City Connector should help invigorate and improve the corridor for the better.

For further information about the Seattle Streetcar lines including the Center City Connector, please visit SeattleStreetcar.org.

Special thanks to SDOT for the graphics and Ethan Melone at The Seattle Streetcar for answering my many questions.