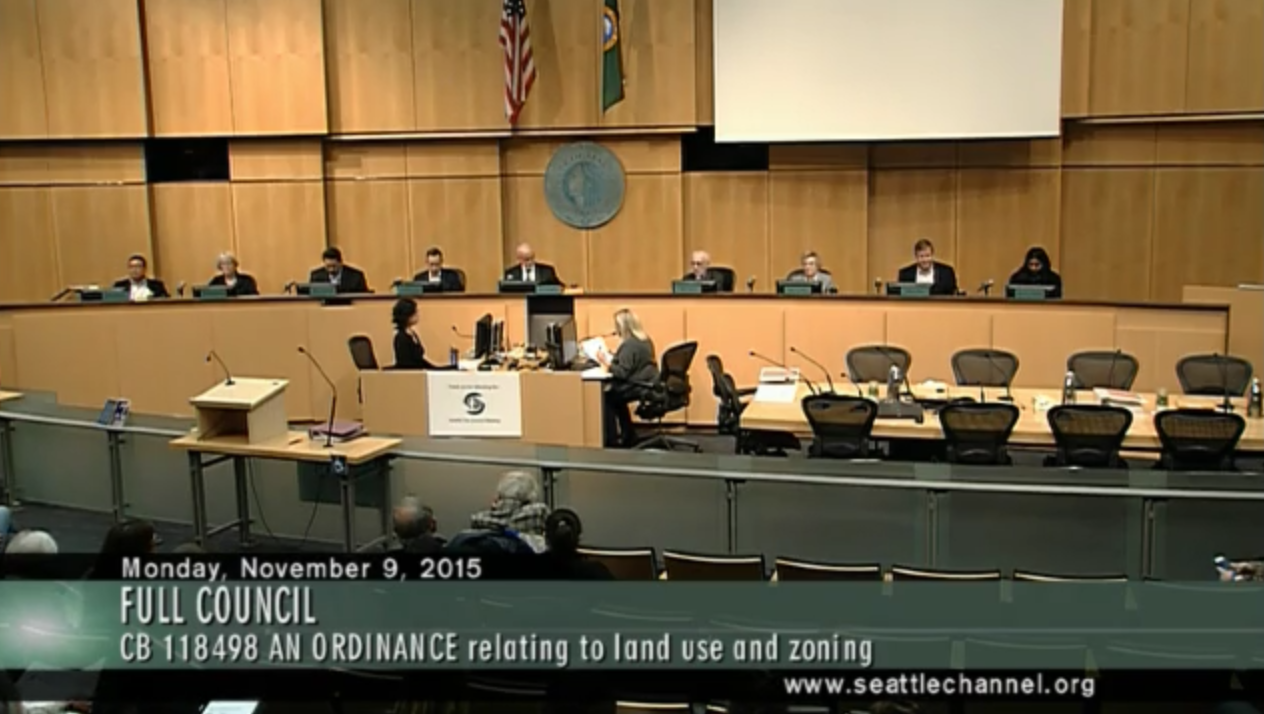 For more than a year, conversations have been ongoing about both the promise and pitfalls of Seattle’s Housing Affordability and Livability Agenda (HALA) process. But in a significant moment at City Hall yesterday, advocates for housing affordability and development celebrated a major milestone when the Seattle City Council unanimously approved a Commercial Linkage Fee tied to all new commercial development. Adoption of the program represents the first legislative step in the HALA process, which seeks to increase development capacity and economic value while also providing commensurate social benefits through land value recapture programs like mandatory inclusionary housing.

Council Bill 118498, as it is known, codifies a new chapter in the land use code, that being Chapter 23.58B under the title of “Affordable Housing Impact Mitigation Program for Commercial.” And while the name is a bit clunky, the chapter is incredibly significant. The code gives developers three options in providing affordable housing: an onsite and offsite performance option, fee in lieu option, or combination of the two. The amount of affordable housing required is first determined by zone and then square footage of proposed commercial space1.

We previously covered how the Commercial Linkage Fee will work, but to recap:

Those numbers aren’t entirely picked out of thin air; they’re based upon a comprehensive study by David Paul Rosen & Associates to evaluate the economic impacts that commercial activity and jobs place on the local housing market. Their report recommended considerably higher impact fees in the range of $64 to $80 per square foot. Still, the fees are projected to rake in well over $195 million over the next decade for affordable housing.

In the lead up to final vote, Councilmember Mike O’Brien offered an amendment to the bill to include a new section. The proposed section did not alter how the Commercial Linkage Fee works, but it did add a reference to a lengthy (15 page!) attachment listing findings of fact. Those facts essentially explain how the Commercial Linkage Fee came to be, how it advances the goals of HALA, and how it is defensible under City and State law. Garnering full support of the Council, it was adopted to the amended bill. But before voting, Councilmembers took time to provide their thoughts on the bill.

Councilmember John Okamoto was first up to speak, and perhaps for one of the last times on the Council (he will retire later this month). He commended the City’s effort to engage in progressive policy to deliver affordable housing and expressed great pride in his privilege to vote for it. He also reminded the Council that Seattle isn’t the only place in the region that is adopting affordable housing policies. He pointed out that many other jurisdictions are implementing similar tools that serve as good examples.

The Council then turned their attention to Councilmember Kshama Sawant. While she expressed a clear desire to cast her vote in favor of the measure, Sawant felt that this legislation would not offer affordable housing soon enough and presented words of caution:

If we content ourselves with only demanding what big business agrees not to oppose, then we will not actually eliminate homelessness. We will never have enough affordable housing. And working people will never get out of the endless grind of living paycheck to paycheck. The goal has to be making housing affordable for all. The goal is not what big business is happy with.

Sawant suggested that developers should not simply be trusted to play kindly with the City through this process and pointed to the fight for a $15 minimum wage, where business sued the city over the law despite a similar grand bargain, as an example of bad faith. And she went on to reiterate that “we should not stop here” when it comes to affordable housing policies.

Councilmember Mike O’Brien wrapped up the conversation on the proposed bill by summarizing his excitement for it and the work yet to do:

This is a good and important step. That this alone will not do anything, there’s a lot more work to do. And the work has to be much broader than just what we’re talking about. It’s great that we’re almost there to take this step that will require all new development in our commercial and multi-family zones will be contributing toward providing affordable housing for the first time in the city’s history. That is something to be really excited about. Yet, we heard today that the challenges around affordability, throughout the income spectrum, for folks that have experienced homelessness or currently experiencing homelessness, to folks that are going to school, to working full-time jobs. We’re all struggling with how we manage to afford the city. And we need to do a lot of work around this and the other recommendations that came out of HALA.

The City Council approved the legislation on a 9-0 vote, and upon doing so was met with a standing ovation from the crowd gathered.

The Council also reaffirmed their commitment, in a unanimous vote, to moving full steam ahead on a host of remaining HALA legislative proposals. As adopted, Resolution 31612 establishes a breadth of key policies for consideration, including:

The resolution sets a very robust timeline for policy proposals with full adoption anticipated by September 2017.