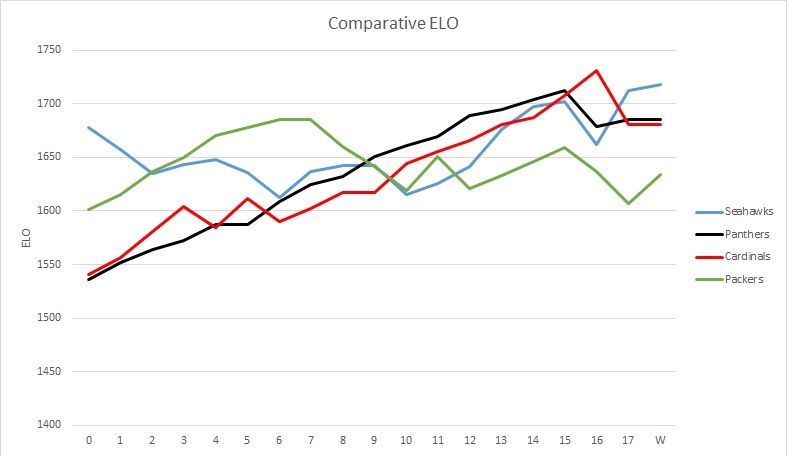 Hey fellow 12s! Here is a quick ELO summary of the 2015 season and wildcard game for your Seattle Seahawks. 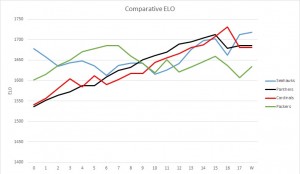 By Fivethirtyeight’s week-to-week ELO score, the Seahawks are the best team of the four NFC contenders heading into Sunday’s 10 AM game in Charlotte, North Carolina. Actually, they would be the highest rated team in the AFC as well after the wildcard game. While the Hawks got out of the gate a little slow this season, the finish has been in an upward direction (similar to the 2014 season). Let’s look at the teams individually: 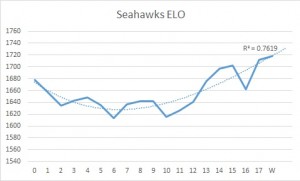 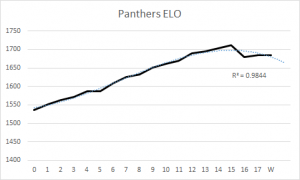 The Panthers ended their impressive 15-1 season by limping into the playoffs with a loss in week 16 to the Atlanta Falcons and an easy win over a bad Tampa Bay Buccaneers squad in week 17. That said, 15-1 is no joke, but it caused me to look at the absolute value of ELO change from week to week that the Panthers gained in ELO stature (I’ll explain why I picked this metric in the next paragraph). It turned out that over the 2015 season, the Panthers gained and lost an absolute total of 215 ELO points from week 1.

How did the Seahawks fair in this department? Well they dug themselves into a bit of a hole early in the season but managed to finish strong by gaining and losing an absolute total of 330 points this season – 115 points more than the Panthers! Keep in mind that the Seahawks also finished with the highest ELO score in the NFL despite the early setbacks!

Why is this so impressive? I like to think of the absolute ELO in week-to-week combined with final ELO score as a measure of a team’s grit.

A large absolute value means that there were some big swings in victory and loses. A medium to small value means that the team consistently played close games – barely eking out wins or loses. Couple the absolute scores with the team’s final ELO rating and you’ve got grit/tenacity. For the Seahawks who finished with a higher ELO and a much larger absolute week-to/week ELO swing, it reflects a tougher team — a team with grit and on a mission. A team that persevered through the highs and lows of 2015 — that despite losing ELO stature during the early and middle portions of the season, the Seahawks were able to fight their way back out of that rut to the very top.