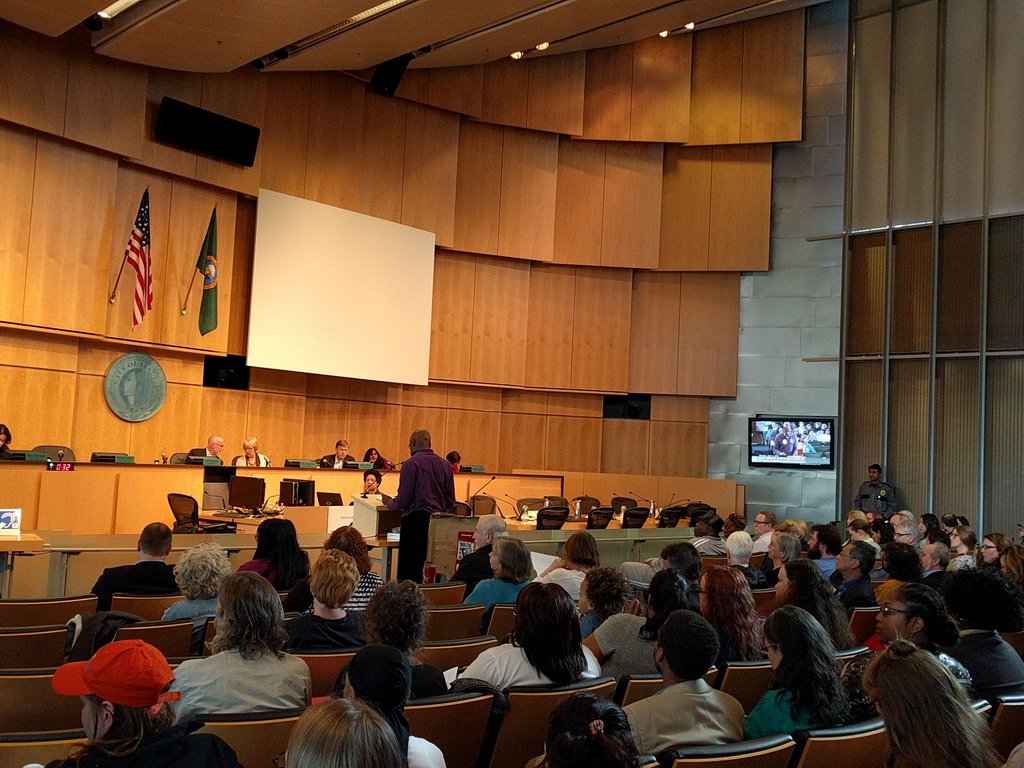 On Monday, the Select Committee on the 2016 Seattle Housing Levy held a public hearing on doubling the housing levy and received very positive feedback. (See our tweets below for a brief play by play.)

Joel Connelly reported that Mayor Ed Murray plans to use the $290 million planned in the 2016 housing levy for a variety of uses:

The mayor is proposing $201 million capital funding and $42 million operating funding for “rental production and preservation.”  The levy is designed to produce and preserve at least 2,150 apartments. Each will be affordable to low-income families and individuals for at least 50 years.

The $290 million levy would put $11.5 million into short-term rent assistance and stability services for 4,500 families at risk of eviction and homelessness.

And, with $9.5 million, the proposed levy will help 100 current low-income homeowners stay in their homes, and 180 first-time homebuyers of limited income find a “stable and affordable” place to reside.

Seattle’s series of housing levies have so far helped house or shelter about 20,000 households: “Since 1981, Seattle voters have approved one bond and four levies to create affordable housing,” the Seattle Housing Levy website states. “Seattle has now funded over 12,500 affordable apartments for seniors, low- and moderate-wage workers, and formerly homeless individuals and families, plus provided homeownership assistance to more than 800 first-time low-income home buyers and emergency rental assistance to more than 6,500 households.”

It’s crucial that this item of the Housing Affordability Livability Agenda (HALA) passes. A doubled housing levy will help Seattle’s strained public housing programs keep pace in the midst of a severe housing crisis that threatens to overwhelm them. More policy interventions will be necessary to address affordability, such as the upzones that will activate the linkage fees and inclusionary zoning that will create more units. But the housing levy is an important piece of the puzzle we should not overlook.

The plan is to put the housing levy on the ballot in this year’s August primaries. If past history is any guide, the measure has a high chance of passing. The 2009 housing levy passed with 65.6 percent of the vote.

President and CEO of solid ground is testifying on support of levy. #HALA #SEAHousing @SolidGround

"We are not idiots. We know how to end homeless for thousands of people" and the audience voices agreement. #HALA #SEAHousing

First 'opposition' to levy since I've been here. Doesn't believe we have lack of funds. Suggests using animal shelter to house homeless

Overwhelming support for the levy renewal & expansion. Everyone in affordable housing representing. sorry if I missed a quote from your org