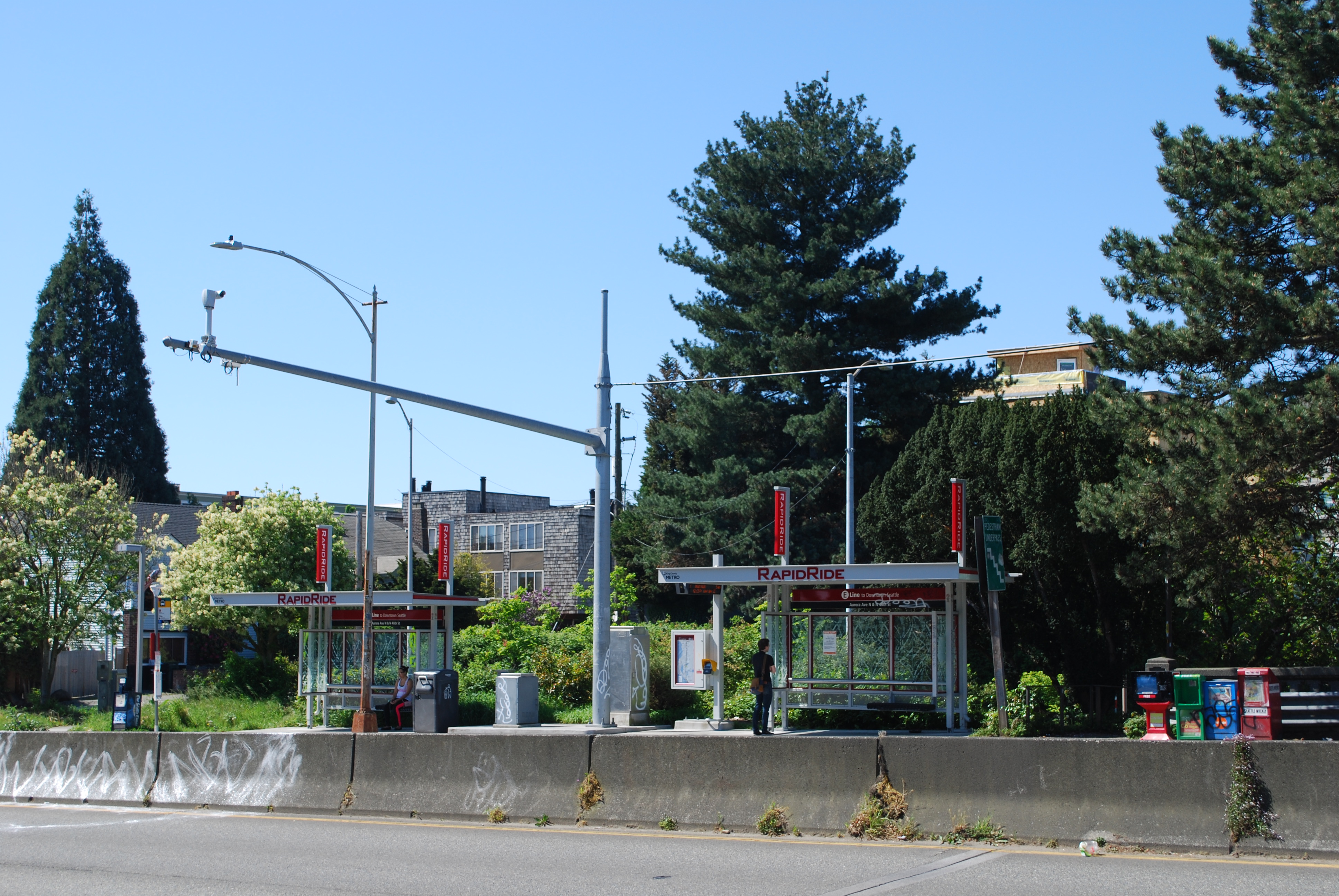 The bus stop at 38th Street and Fremont Way — the glorified name for the Aurora Avenue on-ramp — does the heavy lifting for transit users in Lower Fremont. From there it’s a quick ride Downtown on Aurora. One bus you won’t be catching there though is the RapidRide E. The reason is Aurora’s highway design does not allow easy off and on access; so, instead the E skips Lower Fremont entirely. Even without the E, bus routes 5, 26X, and 28X all pass through this stop. The 5 is in the frequent network and the 26X and 28X are supposed to combine to together to form a frequent network from 38th Street N southward. You’d think that would mean Lower Fremont’s service is excellent. You’d be mistaken. Long waits and crush loads are the norm for those boarding at 38th Street during the peak morning commute. To address this, I propose we add new RapidRide E stop for Lower Fremont at Aurora Avenue and 38th Street to help shoulder the load.

The problem is in part overcrowding; many of the buses arrive to 38th Street full during the peak morning commute. Now I’m not talking ‘oh I didn’t get a seat, that’s too bad’ full. I mean packed to the gills, not one cubic foot more of human carrying space. Not infrequently bus drivers don’t even stop since they have no room. This can be demoralizing to a transit user waiting several minutes at a seemingly high frequency stop to hop a ride to work. And due to bunching caused by traffic farther upstream, the wait can drag into the ten minute plus range even when the 5 and 28 are at 10 minute headways and the 26 is (briefly) at 15-min headways. Ideally, one would hope those three routes would create 5 minute spacing or better.

There’s no heavier workhorse in Metro’s fleet than the the RapidRide E, which handles about 16,000 trips each per weekday and could carry thousands more if a stop could be engineered in Lower Fremont/Wallingford. The E reaches 5-minute frequencies at peak commute, far greater than any bus that currently stops at 38th Street. It would seem a no-brainer to stop in Lower Fremont, which is the densest North Seattle neighborhood in the Aurora corridor. However, the highway’s quirky design does complicate things and Metro Transit has yet to surmount the obstacles.

Obstacles To Ramping Up Service

Aurora Avenue was shoehorned into the neighborhood; the northbound on-ramp is too narrow and the turn too tight to permit a bus to enter the highway from 38th Street. Additionally, Bridge Way’s median would force the bus to make a circuitous loop to reach the on-ramp in the first place. Meanwhile, southbound buses would have to turn right at 39th Street and make a sharp left onto Fremont Way at a congested five-way intersection (with Fremont Avenue). This would be time consuming and inefficient and inconsistent with an ostensibly rapid service.

Highway Level E Stop Could Get The Job Done

The simplest solution would be to put a RapidRide stop not on the on-ramp but on the shoulder of Aurora Avenue just north of 38th Street and then improve pedestrian access. We might want to build another staircase or widen sidewalks, but really all we need to do is paint better crossings and maybe some wayfinding. A stop on the shoulder keeps the RapidRide E rapid while also accommodating Lower Fremont transit users. The merge is a little rapid since the third southbound lane drops briefly for the Fremont Way on-ramp, but similar merges exist elsewhere in the route.

With the space just waiting there, it’s frustrating that Metro Transit hasn’t already added a E stop here. We could get a stop almost identical to the 45th Street stop with little effort. The only pitfall may be the need to take a few parking spots but this is a small price to pay for better bus service for an entire neighborhood. Building a new bus shelter with a card reader would be the only cost to get a stop operational.

Following the disappointments of the much-hyped but underwhelming bus-to-Link restructure, Metro Transit should improve RapidRide E service by adding a 38th Street stop. This small but hugely beneficial change would deliver real improvements to transit access in the area and regain some goodwill in Fremont and Wallingford. For folks living outside the neighborhood, the new stop would allow better access to Fremont’s bustling business district.

Seattle transit users have grown accustomed to waiting. Waiting for better funding to allow more service. Waiting for a rail plan. Waiting for the Seattle process to run its course hoping that course somehow arrives at good transit planning. Waiting for the results of the Seattle process only to find many good suggestions ignored or compromised into oblivion. And of course, day to day waiting for late buses and hoping they actually stop. After all this waiting, 38th Street would be one place where Metro Transit could speed this things up and score some immediate points at little cost.