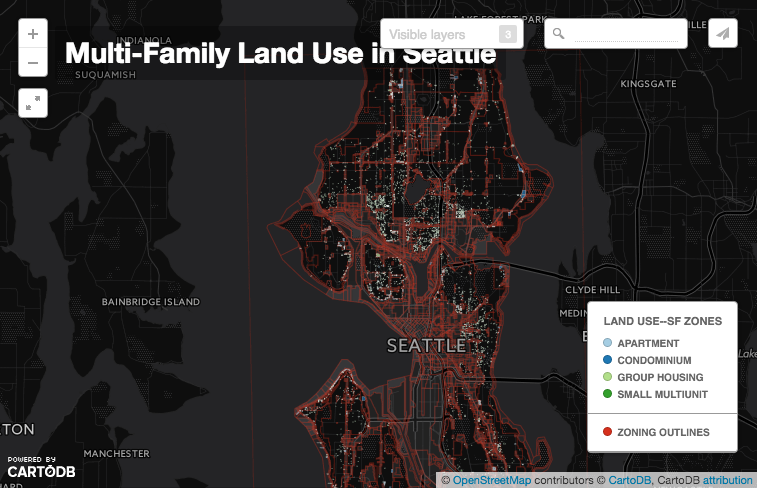 Have you ever walked around a single-family residential area in Seattle and come across a duplex, triplex, or apartment building that seemed just a little out of place? If you have, it’s probably because the structure was built prior to the adoption of single-family zoning—and not because it’s located in a present day multi-family or commercial zone. You likely are looking at a grandfathered in building harkening back to Seattle’s original streetcar days.

Jeffrey Linn, a local Seattle resident and cartographer, has put together an interactive map called “Multi-Family Land Use in Seattle” that highlights parcels where multi-family land uses are located in single-family zones. The map color codes the multi-family land uses to make it easy to differentiate between parcels and locations. Linn defines multi-family a bit more broadly than most planners would by including duplexes into the mix. But given that duplexes are outlawed in single-family areas in Seattle, they’re probably apt for inclusion. His map also picks up on multi-family uses like apartments, triplexes, condominiums, and fourplexes.

What is particularly interesting about the map is that it reveals very different patterns of multi-family housing in single-family areas across the city. For instance, most of West Seattle and Southeast Seattle have very sparse amounts of multi-family housing in single-family zones. Only a few key pockets appear in that portion of the city, particularly around Alaska St & Rainier Ave and Holden St & Delridge Way, and along Alki Ave and Harbor Ave.

Compare that to Central Seattle and North Seattle:

Most of these humble abodes are the kind of places that make for great neighbors and add a little fine grained flavor to a block. So why are they being told to “keep out”?