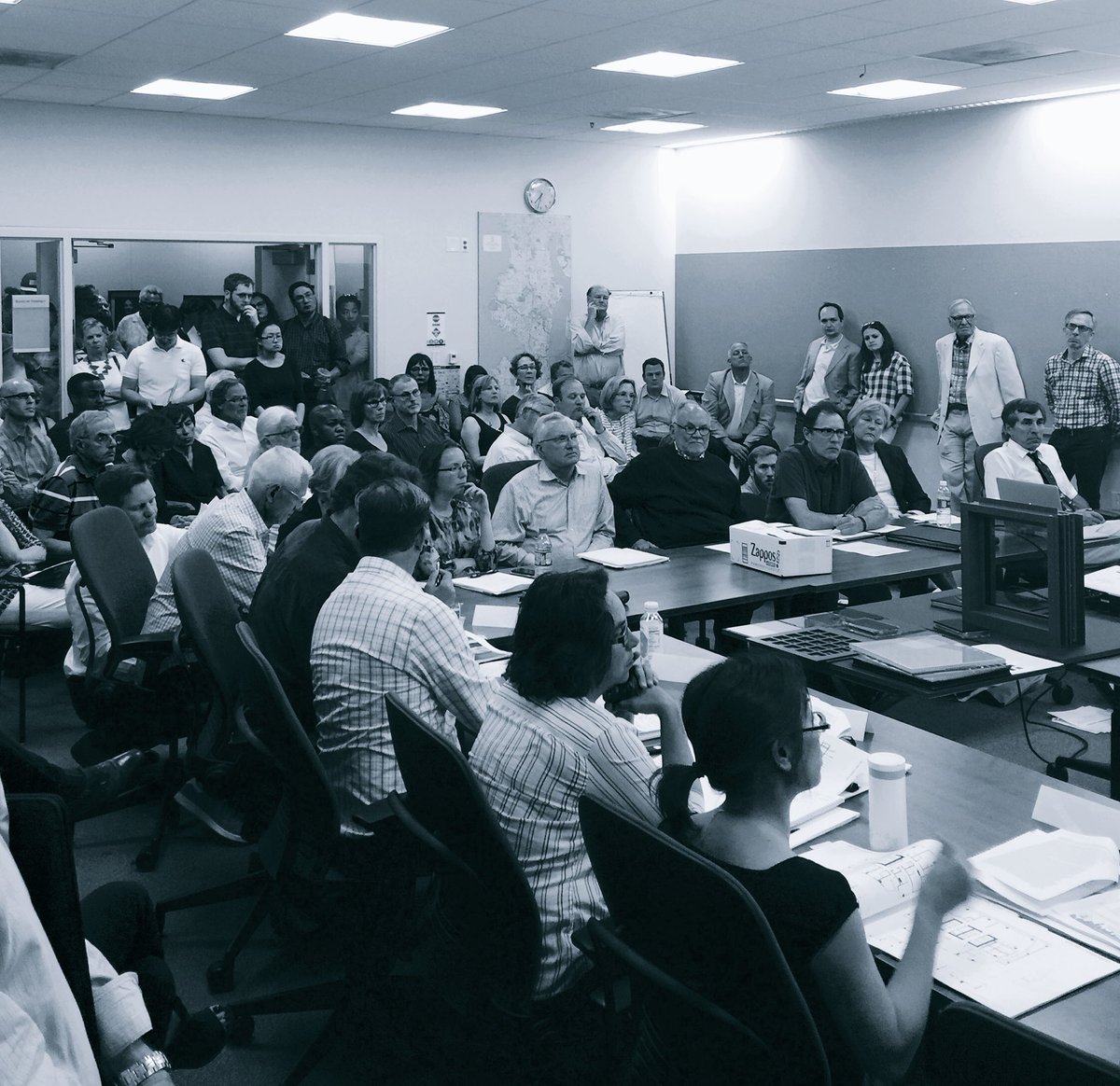 Tuesday evening’s design review meeting was held in the basement of City Hall. The meeting lasted over two and a half hours. No food. No water. No bathroom breaks. It kind of felt like the land use equivalent of Luis Buñuel‘s The Exterminating Angel. Why are all these fancy people trapped in this room and will they ever get to leave?  I would guess that even the most seasoned land use hobbyist rarely attends design review meetings. This was my second.

It began with a “pitch” by the architect and design firm, then a public comment period, next a walk-through of models of the project, and then concluded with a detailed discussion of design elements by the review board. Spoiler alert: the review board did not grant approval for Project No. 3019699, Douglaston MUP Application for the building at corner of Fifth Avenue and Virginia Street. The review board asked for targeted changes to be presented at a future meeting.

The tone and pacing of design review reminded me of watching golf on television, with hushed tones and lots of inside jargon. Of all city processes and meetings that I have attended throughout my life, design review is where I feel the least qualified, like I barely belong there. To my untrained ear, critiques of the building were akin to pretentious appraisals of art by experts on PBS’ Antiques Roadshow.

Now is the time where the design board gets to touch the models; materials #wonktastic #50shadesofstupid #escala pic.twitter.com/YDG7VhpTHT

The most exciting part of the evening included public testimony from Escala residents who have organized for many months to gain concessions from the developer due to concerns over light, air, and privacy. Under the guidance of former Seattle City Councilmember Peter Steinbrueck, the Downtown Residents Alliance (DRA) filed an appeal last week to halt the Mandatory Housing Affordability (MHA) framework as a bargaining chip in their fight for land use code changes to preempt buildings like 5th & Virginia.

Portions of letters were read aloud including one that stated “Please log my displeasure for the design, bulk, height and mass of the proposed Douglaston development. Unconscionable”. Many Escala residents spoke to the need for light and air as a livability issue, which The Urbanist has covered extensively (“tower spacing”). One Escala resident spoke about seeing a couple making love at The Westin hotel from 200 feet away and was horrified at the idea that he might be subjected to this spectacle when the new building sits less that 25 feet from his window.

Those in support of the project included Liz Campbell, Chair of Belltown Housing and Land Use and former President of Belltown Community Council, and many members of the community. Campbell stated that the community feels “the enhanced activity in the alley created by early morning deliveries and increased hotel staff presence may provide deterrents to negative behavior that often plagues dark, otherwise empty alleys.” Members of the local business community expressed the need for greater street activation in the evenings. And I spoke during public comment in favor of the project on the grounds that significant concessions to the needs of Escala residents had already been incorporated into design updates by the Douglaston team.

Escala residents are demanding mitigation through design changes that they hope will reduce the sense that this building is close to theirs. Yet, at the time it was constructed, Escala’s builders maximized its site without regard for future development next door. Some Escala residents will likely be unhappy with any tower next door, whether 18 feet away or 60 feet away.

Sited ideally between South Lake Union and Downtown, the 47-story tall building will be a much nimbler tower than its cousin and provide 431 necessary apartment units, more than 150 hotel rooms, and desirable neighborhood retail in area with continued low vacancy rates. But you wouldn’t know that from the dozens and dozens of letters decrying it. Garry Papers, Senior Land Use Planner at Department of Construction and Inspections (SDCI), told me that there are only three or four meetings per year that garner this sort of interest.

Design review board members seemed in broad agreement that their past recommendations had been incorporated in the latest designs. It is unclear if their choice to delay a final decision was entirely related to a few small “targeted” areas or if they were wary to make a decision under intense scrutiny from the public related to the larger questions of density in our city. The next design review meeting for this project will likely not be for several months.

This project is the start of something—the future of McGraw Square. For a neighborhood that some describe as “not quite Downtown” and “not quite Belltown” and “not quite South Lake Union”, these are exciting times. While the Escala residents frequently brought up lack of open space in critiquing 5th & Virginia, there was no mention of emerging plans by Douglaston to activate McGraw Square. With a number of new buildings along the monorail, this park could become a relevant community hub. One of my favorite aspects of urbanism is visioning the future. I can imagine emerging from the Westlake Station and receiving a text message from a friend, “I’m at the table and chairs at McGraw Square.”

You can re-read my tweets from the meeting on Storify.