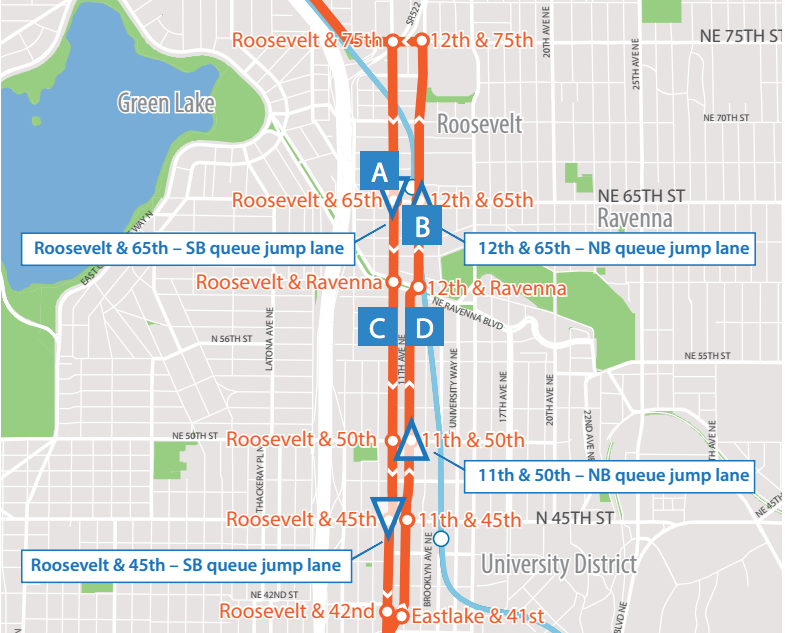 Almost all transit advocates are in agreement that the proposal that the Seattle Department of Transportation (SDOT) unveiled in late June for improvements to turn the Eastlake and Roosevelt corridor into a high capacity transit corridor leaves much to be desired.

SDOT was tasked with analyzing the level of investment that would yield the best level of service relative to cost. The agency settled upon three “levels” of improvements that could be made to bus service here: current RapidRide service (this would only be speed improvements that come from off-board payment and all-door boarding), RapidRide+ targeted improvements, and full on Bus Rapid Transit.

After studying the alternatives, SDOT has released what is called the “locally preferred alternative”—they have essentially ruled full BRT to be off the table, focusing instead on “targeted” improvements. Unfortunately their aim is not that great. Along most of the corridor, the trolley buses would be running in mixed traffic with the exception of some business access & transit (BAT) lanes and transit-only lanes. The completely exclusive lanes are almost entirely based around queue jumps at intersections and therefore take up a very small percentage of the right of way in the corridor.

After the jump are some ideas for fixes that might improve the project as a whole:

P.S. Sharrows are not bike infrastructure. No points for including them on your map, SDOT. Fairview Ave N is an important corridor and you are going to need to figure out how to serve it with bikes sooner rather than later.

There is still time to get this project right. SDOT is currently considering whether they want to have the project completed to U District station or to Roosevelt station by the time that Northgate Link opens in 2021. Considering the project becomes more and more watered down the further north it gets, advocates might recommend stopping at 45th and showing how the project benefits residents and riders. Because this will be a RapidRide branded corridor, it is important that only near-top level service be introduced along any new RapidRide corridors. Past rollout mistakes demonstrate the public perception issue that arises when advertised improvements are not quite fully there.