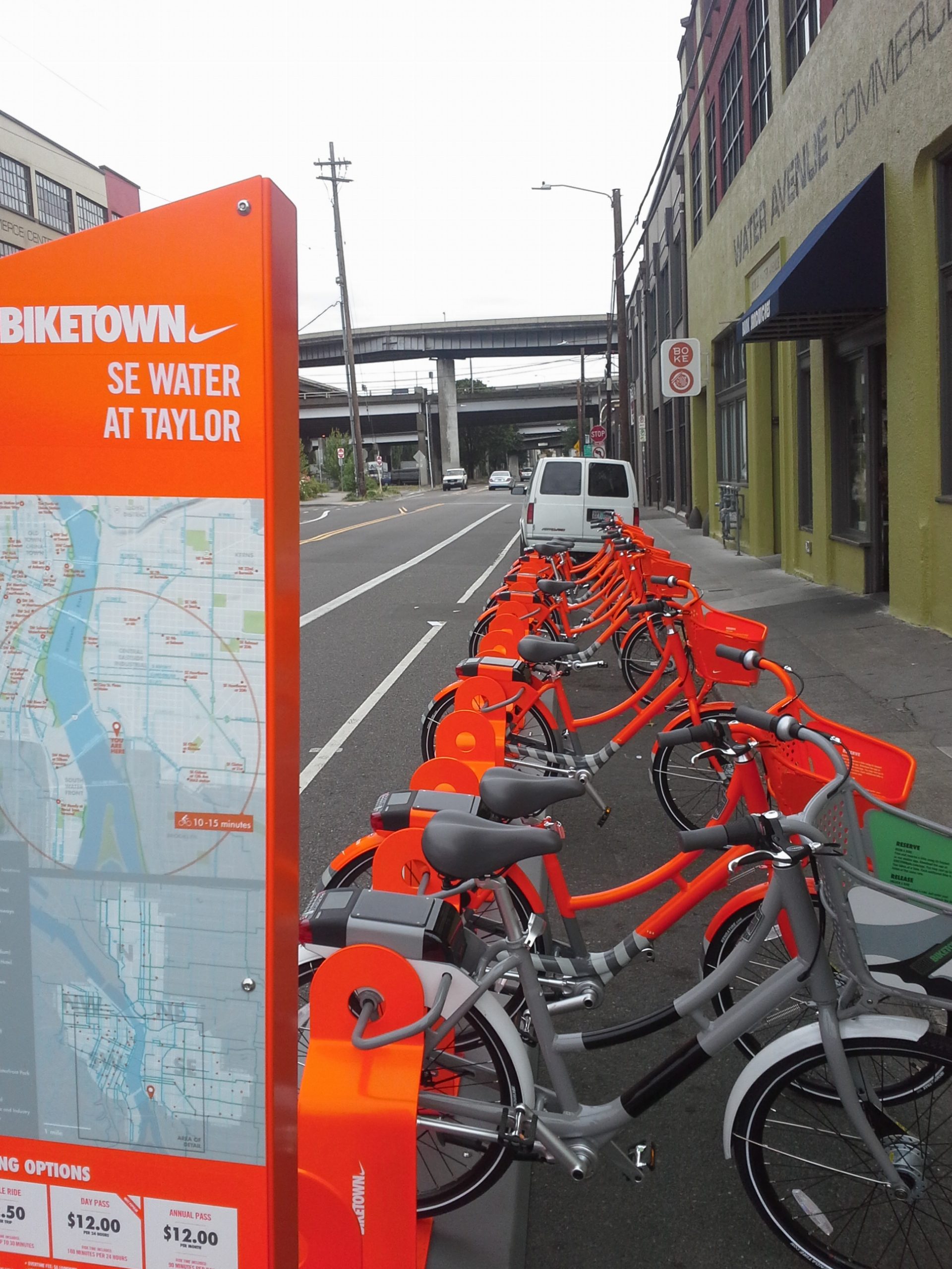 This summer both Portland and Vancouver, B.C. follow on Seattle’s heels in launching a citywide bikeshare program. Oddly enough, they both ended up rolling out during the same week, with Portland’s system having been turned on this past Tuesday and Vancouver the following day. Vancouver, however, is currently in a “testing” phase with only 23 stations currently in operation in the core of th city center.

This weekend, I headed down to Portland to see how the system rollout is going, and to see how Portland’s system compares with Seattle’s.

The main difference between Pronto and Biketown (the name for Portland’s bikeshare system, sponsored by Nike) is that Portland’s system is a “smart bike” system, meaning that the bikes are doing most of the tech work, compared with Pronto where the stations are the hub of the system. You can use a kiosk to buy a ride, but you can also use your phone: with Pronto, unlocking bikes is done at the kiosk, but with Biketown, it’s done on the bike itself, which is equipped with solar panels and an RFID chip reader to read member cards.

(My advice when visiting: skip the member card. I opted for it myself, thinking it was going to save me as much time as a key fob saves Pronto users—but with Biketown, you have to enter a PIN anyway, so it only saves you from entering six extra numbers.)

Biketown launched with 100 stations, almost twice as many stations as Pronto (54), with bike numbers to match. Mobi, Vancouver’s system, will launch by the end of this summer with its full 150 stations. The achilles heel of Seattle’s system right now is not the number of stations, per se, but their geographical discontinuity. Neither Portland or Vancouver have a system in which there are two distinct areas with bikeshare systems, like Seattle currently has in the University District cluster and the Downtown/Capitol Hill cluster.

With the “smart bike” system, Biketown adds a level of complexity into the system that Pronto does not have: users do not have to drop their bike at a station. The docking mechanism works like a regular U-Lock, so any bike parking spot can serve as a bike station—for an $2 fee. Returning your bike to a designated bike station helps you avoid this fee. You can also reserve a bike for 10 minutes in advance, much like a Car2Go, something you cannot do with a Pronto bike. So if you’re at a restaurant or a friend’s house that isn’t right by a station, but you see that someone has dropped a Biketown bike off somewhere nearby, you can make sure no one else snags it by reserving it. I tried this once, and got an email from Biketown reminding me that they were adding on the fee.

Because the bikes can be locked to bike parking like any other bike, overflow at stations becomes less of an issue, as demonstrated at the Clinton & Division Street Fair on Saturday: 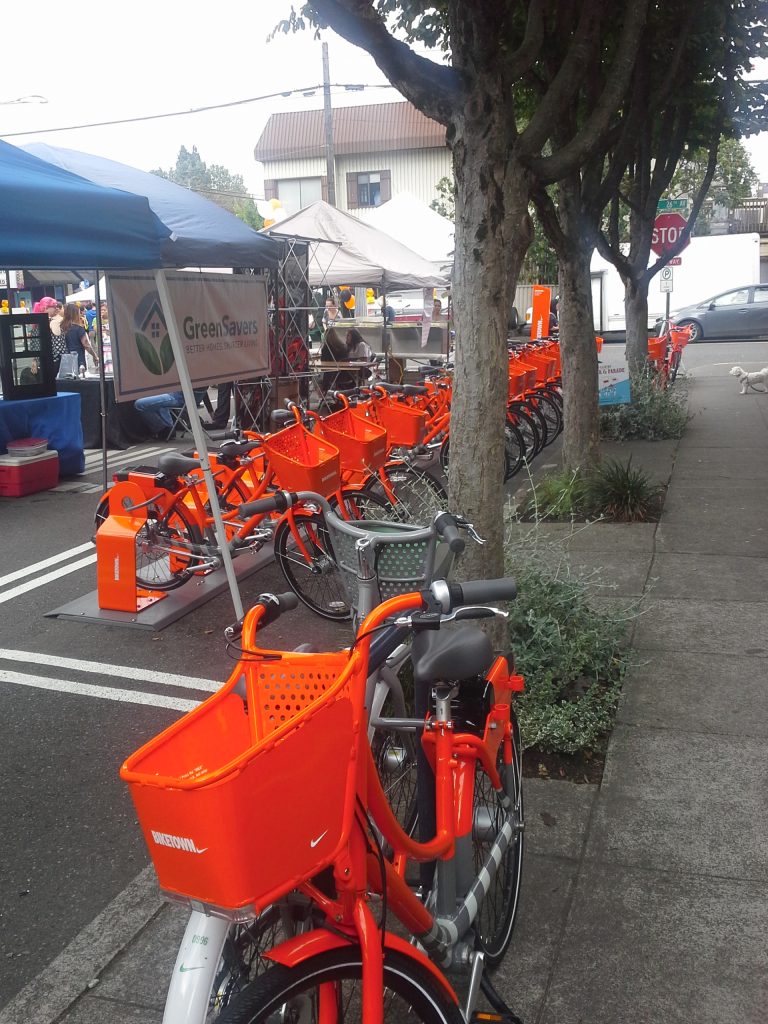 What did I think of Biketown? Here are some of my initial thoughts:

The pricing structure is probably the biggest fault that I see with Biketown. Like Pronto, there is a yearly membership option that allows you to pay monthly with a one-year contract. $12 a month is really a pittance for an entire transit system like this, and well worth it. But Biketown puts a cap on daily usage time by annual members at 90 minutes, which seems unusually punitive for a new system. The bikes are sitting there, waiting to be used, and potential new users are wanting to see how useful the bikes can be.

The other two pricing options are a 24-hour pass, which costs $12 and comes with 180 minutes of ride time, or a one-time use fee of $2.50 for a ride under 30 minutes. For annual members and 24-hour pass holders, extra minutes are $0.10, or $6 per hour. This means that the most zealous Biketown users could rack up a hefty bill pretty quickly: penalizing the riders who use your system the most seems misguided.

The best bikeshare systems have their utility proven by where the stations are, and how easy it is to ride between them. Portland is just plain ahead of the curve when it comes to making biking easy, and they’ve plopped down the number of stations needed to make the system worthwhile. Bikeshare stations and greenways through vibrant urban neighborhoods were made for each other. And Portland’s greenways have teeth, mainly in the form of diverters that keep car traffic off of them, and also great signage connecting users to the rest of the bike network.

Station placement wasn’t perfect. Stations were not as ubiquitous in downtown Portland as I expected, and they appeared to have been plopped down a bit haphazardly there, much like in Seattle. One station is currently taking up an entire decommissioned Portland Streetcar stop, with very little clearance between the bikes and the platform edge. (Hey, pretty soon that will be a Seattle Streetcar running on those tracks!) I expect that the Portland Bureau of Transportation will look at how stations are performing in the coming months and make adjustments accordingly—something I wish was happening in Seattle sooner rather than later. Like Seattle, Portland does plan to expand their service area in the future. 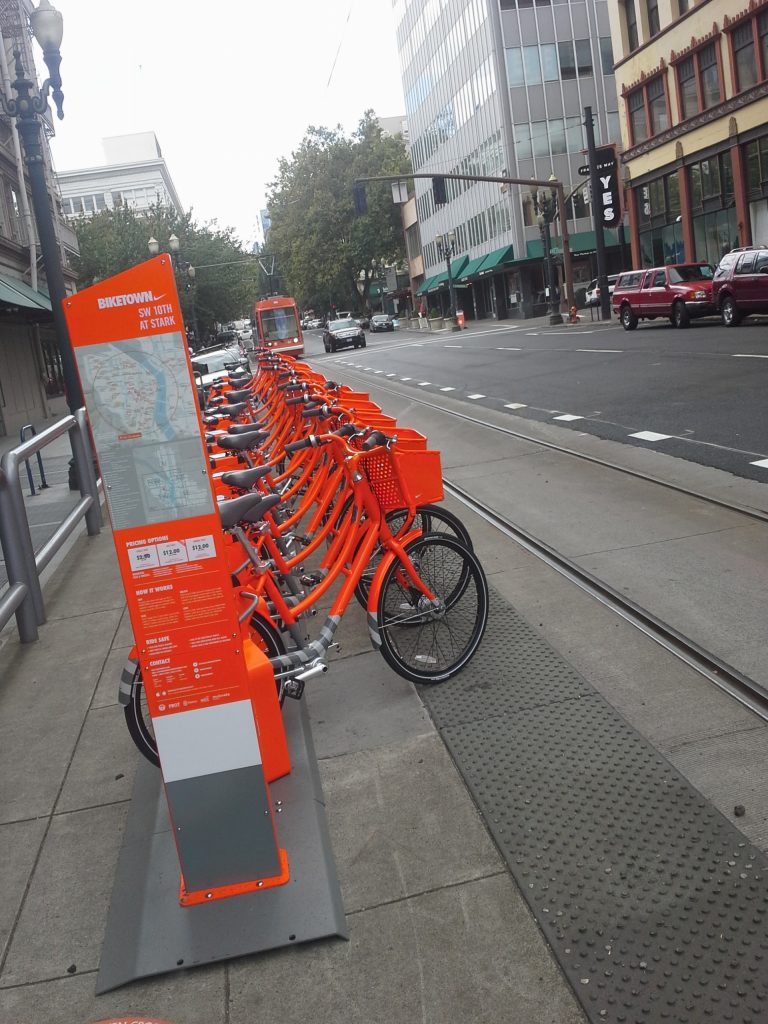 Overall, kudos are due to Portland for a smooth bikeshare system rollout. I spoke to people all weekend who were really excited about having a bikeshare system in their city and who wanted to know more about how it works; this is exactly what I saw in Seattle during Pronto’s first few weeks and it’s incredibly exciting.

Biketown does appear to be better set up for success than Pronto was initially—I expect visitors from Seattle will find it intuitive and easy to work into their vacation routine. I hope to be able to say the same about Pronto next year after our expansion plan takes effect.