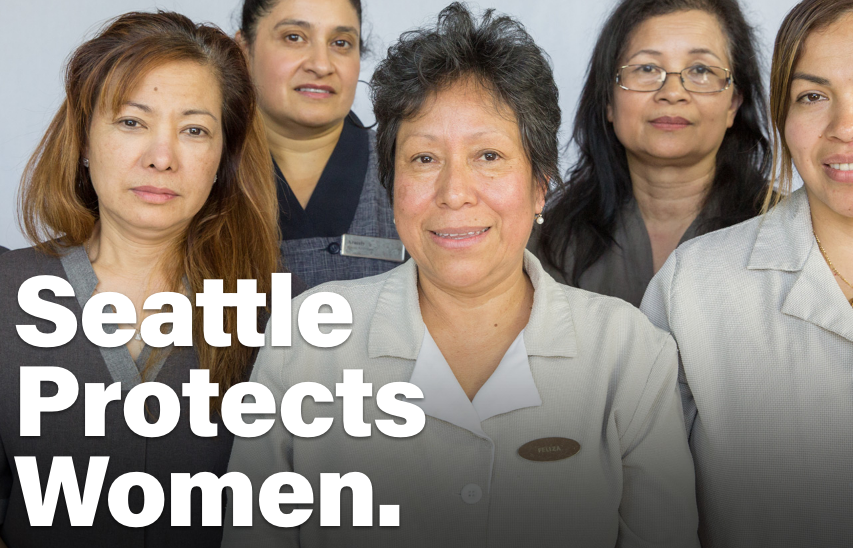 In the fall, Seattle voters will see a workplace safety, security, and health initiative on their November ballot. The measure, known as Initiative 124-Seattle Protects Women, is targeted at improving conditions for all hotel employees that work in the city, but especially women housekeepers. Unite Here Local 8, which represents thousands of hotel workers locally, circulated the initiative earlier this year securing enough signatures to have the Seattle City Council send it for a public vote. The initiative covers four primary issues:

Protection from Assault and Sexual Harassment

According to proponents of the measure, some 80% of all housekeepers in Seattle are women. Unfortunately, the women who carry out their jobs are often victims of sexual harassment and assault. Most instances, proponents say, go unreported by employees and management. I-124 attempts to change this though by requiring hotels to institute new procedures and safeguards for employees.

For instance, all housekeepers that work alone to service guest rooms would be issued panic buttons to use whenever they witness crime, sexual harassment, or emergency. If such an event were to occur, the employee would be entitled to leave the area of perceived danger immediately with no negative repercussions from their employer, request to work on another floor or work area, and take paid time to formally report the crime to police and speak with a counselor.

Meanwhile, the employer would be obligated to record any accusations of sexual harassment or assault registered by offended staff members. The names of accused guests would remain in hotel records for five years and said guests would be prohibited for up to three years from staying at the hotel. After a three-year period of being banned from a hotel, the accused guest could stay again. Hotel service staff, however, would have to be notified of the room that the guest is staying in and warned to use caution. And importantly, the employer would be required to cooperate in reporting and investigation of any crime to law enforcement.

The measure would bolster workplace safety practices by adding general language imploring employers to use safe workplace practices, deploy safety devices, and protect employees from chemical hazards. But the meat of the workplace injury policy would focus on capping workloads. Proponents say that housekeepers experience high rates of workplace injuries due (95% of all housekeepers) to the often long hours that they work combined with heavy lifting of furniture (e.g., mattresses). The general cap for housekeepers would be set at 5,000 square feet of cleaning guest rooms in an eight-hour day. The square footage cap could be reduced if a housekeeper does 10 or more “strenuous cleanings” (i.e., each equaling a checkout room cleaning or stayover room cleaning with a non-standard bed). If an employee works beyond the applicable cap to their day’s workload, then they would be entitled to time-and-a-half pay for the full day of work as compensation for extra workload.

The initiative would set new medical insurance coverage standards for large hotels, specifically for low-income hotel employees, in order to increase the share of hospitality employees participating in private healthcare benefits. Employers would be required to pay additional monthly wages to low-income hotel employees (defined as making 400% or less of the federal poverty line based on household size) depending upon the current healthcare coverage that the employer offers. Employers offering healthcare coverage equal to or better than a gold-level policy on the Washington Health Benefit Exchange and requiring no more than 5% of the employee’s gross taxable pay to be contributed toward premiums would be exempt. Healthcare coverage options falling below this standard, however, would have to be accordingly compensated based upon the payment calculations of the initiative. That could top more than $200 per month for the employer.

From time to time, hotels merge or come under new ownership. Proponents seek to protect senior employees from being pushed out when things change. New employers would be required to establish a preferential hiring list of current employees and classify their positions accordingly. Six months from developing and executing the preferential hiring list, the employer would have to offer positions to current employees as relevant to the needs of the hotel. Each employee hired under this list would have to be retained for no fewer than 90 days unless there is just cause for the employer to do so.

The full language to appear on the ballot is as follows:

If passed, this initiative would require certain sized hotel-employers to further protect employees against assault, sexual harassment, and injury by retaining lists of accused guests among other measures; improve access to healthcare; limit workloads; and provide limited job security for employees upon hotel ownership transfer. Requirements except assault protections are waivable through collective bargaining. The City may investigate violations. Persons claiming injury are protected from retaliation and may sue hotel-employers. Penalties go to City enforcement, affected employees, and the complainant.

Should this measure be enacted into law?