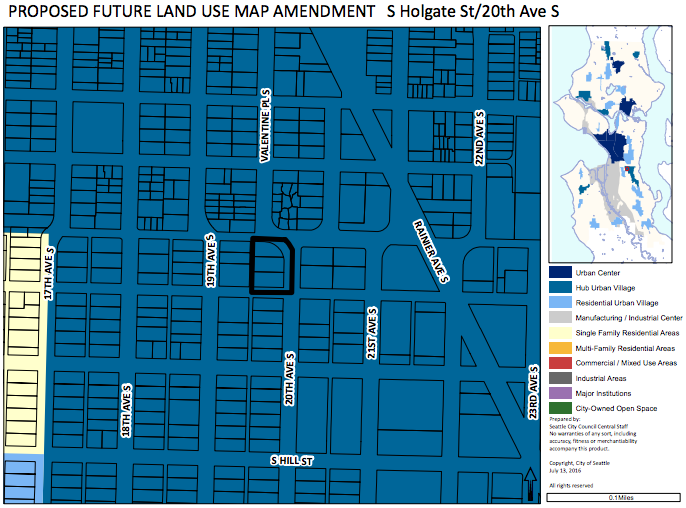 Work is well underway in updating Seattle’s Comprehensive Plan as part of the Seattle 2035 program. And while that is close to adoption, the City Council is already looking ahead to amendments to the Comprehensive Plan for 2017. With few exceptions, the City is allowed to entertain annual amendments to the Comprehensive Plan under the docketing process. The City Council appears ready to direct the Office of Planning and Community Development (OPCD) to focus on a handful of specific amendment proposals besides those associated with the Mayor’s Housing Affordable and Livability Agenda (e.g., urban village expansions) and Seattle 2035.

Before making it to Council, a slate of proposals were considered for the annual docket, but the Planning Commission, Office of Planning and Community Development (OPCD), and Council Central Staff have whittled down the list. Three primary sets of proposals were presented to the Planning, Land Use, and Zoning Committee this week:

And in addition to those proposals, Councilmember Mike O’Brien submitted an additional item for policy consideration by OPCD. His proposal would result in the creation of new environmental justice policies in the Comprehensive Plan.

The proposed Eastlake FLUM amendment (1208 Eastlake Ave E) is centered upon on a large lot located at the south end of the Eastlake Urban Village. The 2.4-acre site is hemmed in by I-5 on the east, wooded public property on the north, and Eastlake Ave E on the west. OPCD would be directed to evaluate a FLUM change that would add the property to the South Lake Union Urban Center, a designation which lies directly south of the property. Given that the site was developed in 1999 as a four-story structure, the land use designation change probably won’t mean much for potential future zoning. But it is worth noting that the property to the south is zoned SM-125 while the subject property is zoned IC-45.

The proposed North Rainier FLUM amendment (S Holgate St and 20th Ave S) isn’t so much as FLUM amendment as it is a neighborhood plan amendment. Currently, the Comprehensive Plan FLUM designates the subject site as Single Family Residential and the SF5000 zoning is reflective of that. The proposed Seattle 2035 changes, however, would result in the site having its land use designation amended to Hub Urban Village (as shown on the map below in blue). The property owner would like to apply for a rezone to allow for multi-family development once the FLUM change occurs, but even it does, a neighborhood plan policy may need to be changed in order to allow the rezone.

The proposed Beacon Hill FLUM amendment (1625 S Columbian Way) consists of a large triangular tract of land south of S Columbian Way. The 2.6-acre site is currently developed with a religious institution. The proposed legislation would direct OPCD to consider a change of the FLUM designation from Single-Family to either Commercial/Mixed-Use or Multi-Family Residential. This would facilitate a rezone from SF5000 to a range of zoning types that allow higher density residential and commercial uses (e.g., LR, MR, or NC). That area already has land designated as Commercial/Mixed-Use with NC1-40 zoning.

Another amendment proposal would require OPCD to evaluate policy changes to the Chinatown/International District neighborhood plan. OPCD staff submitted the docket proposal in May to consider changes to cultural and economic vitality policies, the genesis of which seems to be from community members who have been very vocal about enhancing the identify of the various districts. Three specific policies that staff offered up in their docket proposal include the following:

Work with the Chinatown/International District to develop strategies to ensure availability of affordable commercial space in Chinatown, Japantown, and Little Saigon areas.

Work with the Little Saigon community on strategies to strengthen its culturally based neighborhood identity.

The first policy would establish a framework for creating a new EcoDistrict that embodies the cultural identities. The second policy would direct the City to tackle equity and displacement issues in the neighborhood. And the third policy would allow the City to form new strategies to retain businesses in Little Saigon and develop unique urban design frameworks.

Councilmember Johnson proposed additions to the overall policy proposal with two mutually exclusive options. One proposed option would have fast-tracked review of two site-specific FLUM amendments to the BINMIC by tasking the review responsibility with OPCD; that would have meant separating them from the larger industrial lands review process with the Mayor’s Industrial Lands Task Force. The other proposed option—which was ultimately selected—would simply leave them as part of the larger Industrial Lands Task Force review. The option also included additional policy direction on tackling compatibility and locations issues surrounding emerging, innovative industrial uses (e.g., craft producers with retail elements).

Councilmember Johnson noted that the primary disadvantage of the second option is that the Mayor’s task force has no defined timeline for delivering recommendations to the City Council and is primarily focused on industrial areas closer to the Duwamish whereas OPCD does have a specific target timeline for producing deliverables. Councilmember O’Brien noted that his preference was the second option, primarily because he felt that the City should move cautiously on changing land uses in industrial areas and that proposed changes would be better informed as part of the larger industrial discussion. But he also acknowledged that changing uses in the long-term is an important discussion to have as the city continues to evolve and expressed concern over the lack of a defined timeline for the Industrial Lands Task Force to produce recommendations. Councilmember Lisa Herbold added that she, too, supported the second option, largely on the basis of stakeholder engagement that would be better carried out through Industrial Lands Task Force.

The proposed Interbay FLUM amendment (1616 W Bertona St) is for a site located on the edge of the BINMIC. To the south is land designated as Commercial/Mixed Use centered on W Dravus St. Proponents of the map amendment wish to add the property Commercial/Mixed Use-designated area in order to allow mixed-use zoning. If adopted, the proposal would create an island of mixed-use surrounded by industrial land.

Similarly, the proposed Ballard FLUM amendment (844 NW 48th St) is also for a site located on the edge of the BINMIC. Land to the east is designated as Single Family Residential while Multi-Family Residential-designated land prevails to the north. The proponents of the amendment are requesting a Commercial/Mixed Use designation. While the area is certainly a hodgepodge of uses ranging from commercial industrial and retail to multi-family and single-family, the proposed re-designation would also stand out as an island (or at least a peninsula).

Councilmember O’Brien offered up a proposed policy for consideration that would touch on issues of environmental justice. In his discussion, he noted that socially and economically disadvantage communities are often disproportionately impacted by land use decisions like rezones. The idea here, as his amendment below suggests, is that rezones can increase development capacity in or near areas of poor air quality and result in larger concentrations of socially and economically disadvantaged communities that unduly bear poor health outcomes. The policy proposal would ultimately seek to develop ways to identify and account for those negative health impacts and then appropriately mitigate them through subsequent development regulations or other programs:

Consideration of Air Quality in Residential Land Use. The Office of Planning and Community Development is requested to work with the Seattle King County Public Health Department and the Puget Sound Clean Air Agency to evaluate and provide recommendations for potential amendments to the Comprehensive Plan to consider the health impacts of rezones to allow or increase residential development adjacent to point sources and non‐point sources of air pollution such as transit and freight corridors and highways, and industrial areas. If amendments are proposed, OPCD should identify whether the City’s SEPA policies or other regulations should be amended to incorporate best practices to implement the proposed policies.

None of these proposals will be immediately enacted if approved by the full Council on Monday. Instead, OPCD will be charged with fully vetting options for amendments and then presenting them to the City Council for review and possible approval in 2017.