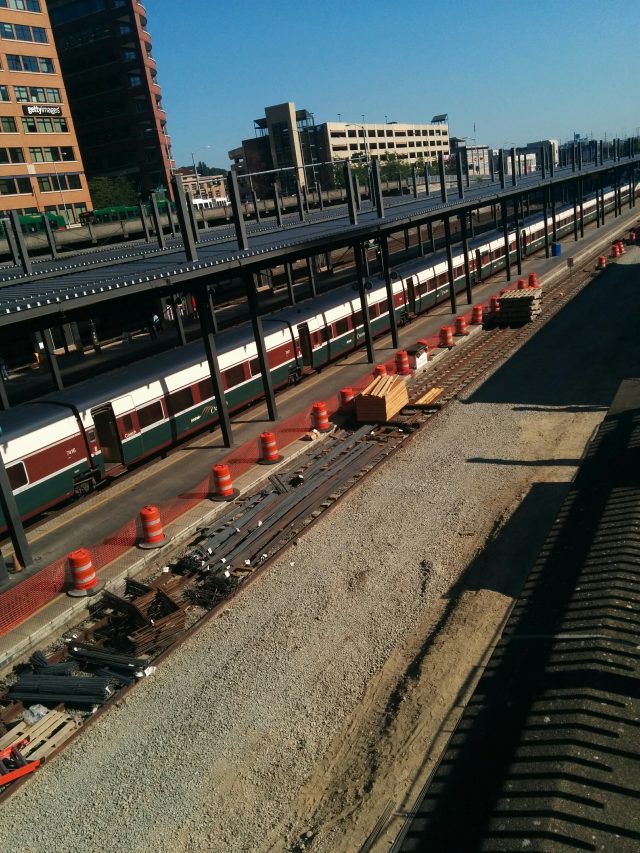 Anyone walking past King Street in the last several weeks may have noticed an interesting transformation taking place. Tracks are being removed, cement molds are being built and trains are being moved to other tracks. To those curious about what is going on, here’s a quick overview.

As part of Washington State’s high speed rail project, King Street station is receiving a series of improvements: extended tracks, relocated power boxes, additional turnouts, a new signal system, and extra platform capacity. Among the most important fixes here are the new platform that allows the previously storage-only seventh track to be used to load passengers and automated train switches which reduce the time required to enter the station.

As with the other high speed rail projects, this is a fairly intermediate set of fixes that will allow incremental improvements in speed and frequency of trains and sets up the system for an even greater level of service if additional funding is secured. Many of the high speed rail projects that are part of this round of funding will be completed before the end of this year with the remainder being done next year. This will enable two additional round trips to run between Seattle and Portland as early as 2017.

Combined with the current four daily Cascades round trips to Portland this will bring our cities to a total of six trips daily. Other parts of the high speed rail project will also improve reliability for Sound Transit’s Sounder service and the Amtrak Cascades service to Vancouver, BC. These include improvement to track quality, stabilization to landslide prone areas on the North Cascades line and a number of track sidings which will enable trains to pass each other more quickly on the crowded BNSF rail corridor. The overall project cost is $800 million and is being paid for by a federal high speed rail grant by way of the American Recovery and Reinvestment Act.

In addition to the rail projects in progress, some discussions have been under way to establish both an art space and an international street food market. The arts and cultural space is proposed to occupy the third floor, and would provide a new public art space and host offices for Seattle’s Arts and Culture office. This is one of many spaces in the train station that has been unused for years but has recently seen a number of temporary uses. Its a large and unfinished space with exposed conduits and duct work. This kind of space has been popular in the recent past for art installations and is currently its being used as an art space until the end of this month. In addition, the city will potentially set aside space to host new meeting spaces and room for city functions, but is currently seeking public input on how to make the best use of the building.

The proposed food market is being advocated for by MarketShare a nonprofit formed for the purpose of bringing a multicultural venue that empowers immigrant and refugee communities by providing a space for selling food from their ethnic background. According to Seattle Eater, MarketShare previously has had a successful pilot program for this kind of space downtown, which had 37 applicants from various countries. They hope to make King Street Station a long-term home for this program. According to their site, their plan appears to be to remake the 2nd floor of the station as this food space and to potentially add some eating areas both inside and in the mostly empty courtyard outside.

In the next few years, there are likely to be a lot of changes coming to our local train hub. It promises to be a much more vibrant center than it has been in the recent past.