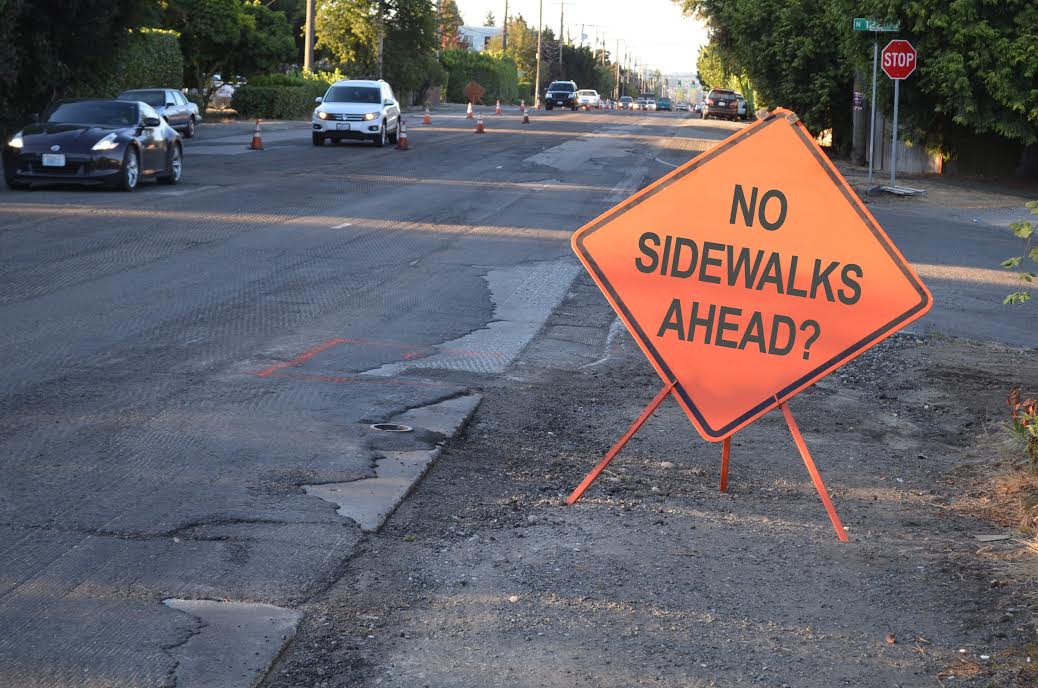 Last week, construction crews began repaving Greenwood Avenue from NW 112th Street to NW 136th Street. Given that this is a busy, high speed arterial with frequent transit service and multi-family housing, one might assume the City would seize this opportunity to build much needed sidewalks. Currently, between NW 112th Street and NW 130th Street there are zero blocks with continuous sidewalks. Yet, despite the city’s oft-repeated commitment to safety, equity and livability, and on the heels of passing the Move Seattle Levy (which identifies this road as a long-term priority corridor), the Seattle Department of Transportation (SDOT) opted to exclude sidewalks from the scope of this $2,820,000 paving project and acknowledges that currently no funding has been identified to complete them at a later date.

Given the recent questions about how much of the draft Pedestrian Master Plan will actually be implemented, it is disheartening to see that even one of the corridors specifically called out in the Move Seattle Levy isn’t on track for basic pedestrian safety. When pressed about the possibility of adding sidewalks in the future, SDOT said there are no plans to build sidewalks between NW 112th Street and NW 125th Street or NW 130th Street to NW 136th Street. SDOT added that there is a project in the works to add sidewalks north of 136th Street and SDOT will probably begin design work on five blocks between NW 125th Street and NW 130th Street within five years. Still, the lack of a plan to build continuous sidewalks on one of the busiest arterials in North Seattle, a street that is lined with multi-family housing, raises serious questions about how the city is prioritizing its transportation dollars and whether or not we truly support livable, affordable housing.

Pedestrians on Greenwood Avenue must contend with deadly fast and heavy traffic. In 2014, almost 28,000 cars a day pass through the north end of Greenwood, only 5,000 less than Aurora’s 33,000. And like Aurora, the road design encourages speeding. SDOT’s 2011 Traffic Report says the 85th percentile speed on Greenwood at NW 137th Street was 42 mph and around 1,500 cars a day drove through at more than 45 mph. Where one would expect to find sidewalks, gaping parking lots spill into the roadway, forcing pedestrians to remain constantly vigilant for cars abruptly pulling off the street.

Not surprisingly, you won’t see a lot of families out for a stroll on this portion of Greenwood Avenue. When possible, most people walk on side streets which also lack sidewalks but have much less traffic. Still, many people walk to Greenwood’s bus stops that have well used, frequent bus service on Route 5 and commuter service on Route 355 and one can only imagine how much ridership would grow if the city made it safer and more dignified to walk here. While the north end of Greenwood Avenue is poised for continuing growth, without sidewalks, there is little hope for vibrant street life.

If you look at Seattle’s myriad planning documents, you would assume Greenwood would be slated for sidewalks in the near future. Both the Seattle Transit Master Plan and the new draft Pedestrian Master Plan highlight this corridor as a priority for investment. While the new draft Pedestrian Master Plan reveals an enormous network of streets lacking in sidewalks and safe crossings, Greenwood scores particularly well for priority investment in terms of safety need, school access, transit access, and equity.

It is also important to note that Greenwood Avenue is absorbing most of the surrounding neighborhood’s new housing. While Seattle touts itself as a collection of urban villages where density meets livability, the north end of Greenwood Avenue represents a starkly different vision of multi-family housing. Rather than a neighborhood center, Greenwood Avenue is the dividing line between the predominantly single-family neighborhood of Bitter Lake to the east and the single-family neighborhood of Broadview to the west. Here, all multi-family housing is literally marginalized along a high speed roadway where pedestrians have scant protection from the heavy traffic, let alone a neighborhood center. You need only travel down the road to Greenwood, Phinney Ridge and Fremont to see how the same street serves both traffic and a vibrant core.

The Greenwood Avenue paving project represents a major missed opportunity to demonstrate the City’s commitment to Vision Zero and building complete streets. If there is a silver lining, consider that Seattle is still relatively early into the Move Seattle era. The lack of pedestrian improvements in this paving project could be a mistake that City officials learn from and avoid repeating on similar corridors with dire needs. There is also nothing stopping the City from going back and adding sidewalks to this missed section as it did recently on the east side of Greenwood Avenue from NW 90th Street to NW 105th Street. With dozens of apartment buildings in place and more under construction, Seattle is past due to ensure the residents on Greenwood Avenue can walk safely in their neighborhood.

Drew Dresman is a Transportation Planner who works at Seattle Children’s and volunteers with Seattle Greenways. He loves the beautiful old home in South Bitter Lake where he lives with his wife and 6 month old daughter, though he also dreams of the day when his daughter can walk to her elementary school safely and the two closest coffee shops are not drive-through bikini barista shacks.